I saw Fleetwood Mac at Madison Square Garden in October. It was a great show, but I wasn’t thrilled with my seats. I was too far away from the stage. Over the past couple of years, I’ve gotten very passionate about being up close and personal with performers. When I realized Fleetwood Mac was performing at the Garden again last night, I started searching for two floor tickets on StubHub. They were all insanely expensive. Then I had a “Eureka!” moment and looked for a single ticket instead, figuring those were harder for people to get rid of. Sure enough, I found a relative bargain that was technically in row 7, though due to a missing row I was really in the sixth row. Lesson learned! If you have to buy a resold ticket and don’t mind going to a show alone … go alone! It’s cheaper.

When flying solo, you might also have some interesting conversations. Before the show, I was chatting with the man next to me: Had he seen the band before, how old was he when he first developed a crush on Stevie Nicks (because everyone — male and female — has had a crush on Stevie), the usual. He said to me, “You must have liked the band since you were a kid.” I started to answer, “Let’s see, I must have been 13 or 14 when Stevie put out Bella Donna (her platinum-selling debut solo album) …” Because there is a law that, at a concert, there must always be some superfan near me who has every relevant date memorized, the guy in front of us whipped around and said sharply, “Bella Donna was 1981! SO HOW OLD WERE YOU IN 1981?” I informed him that in 1981, I was … 13 going on 14. Nailed it!

I was so excited about getting a floor seat that I didn’t think about which side of the stage it was on. If you go see the Mac, you want to get a stage-right ticket — meaning that when you’re facing the stage, you should be on the left side. That’s where Christine McVie is set up with her keyboards. Stevie Nicks spent a lot of her time center and stage-right too. I was on the very end of the opposite side, which meant I got a lot of Lindsey Buckingham. I was as impressed by Lindsey (and his super-skinny jeans) as I was in October, but I started to feel like his personal photographer after a while. Lindsey, I love you, but let’s be honest. I’m there for the ladies. 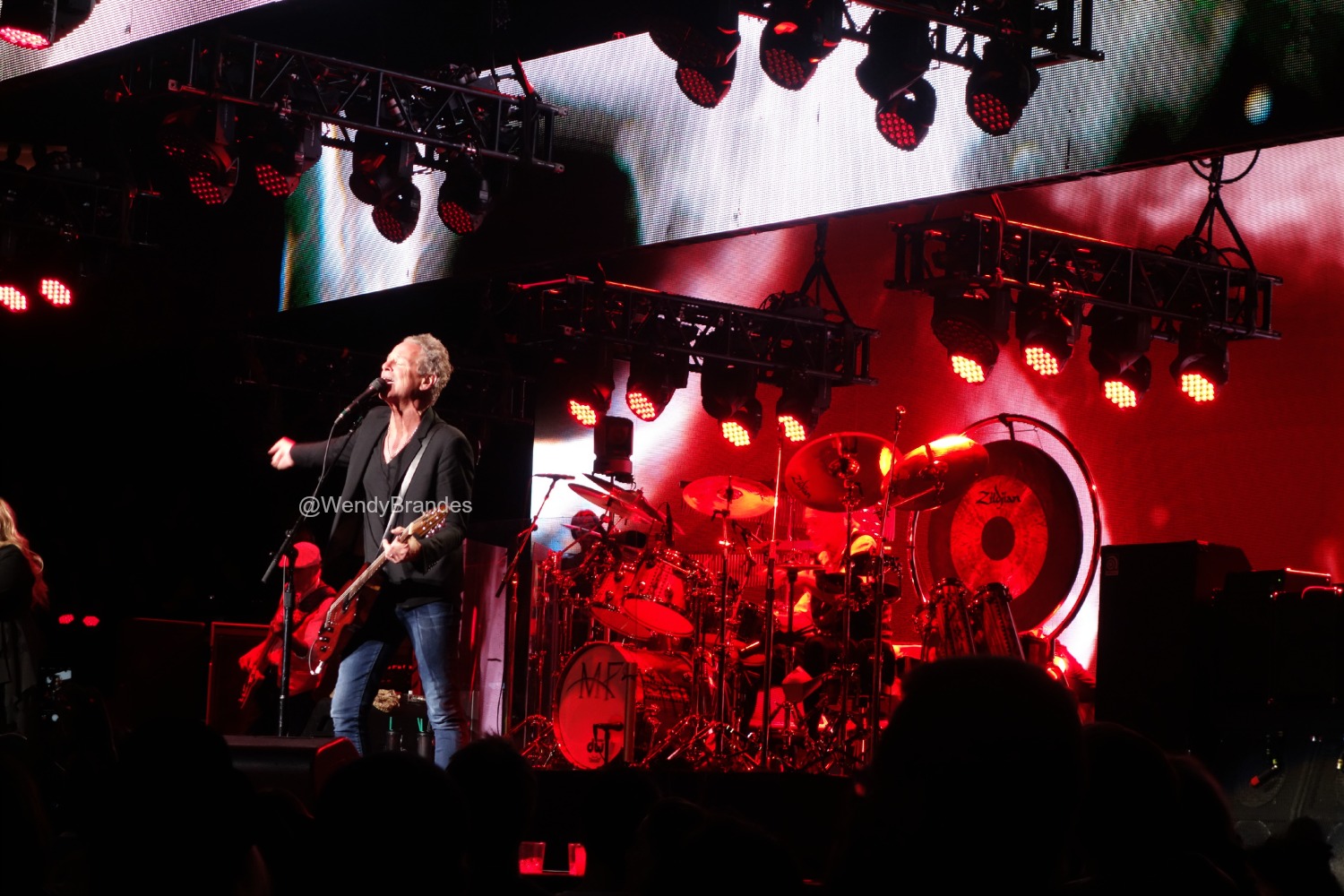 Spent a lot of quality time with Lindsey last night. Click to enlarge.

This is one of my clearest shots of Stevie. 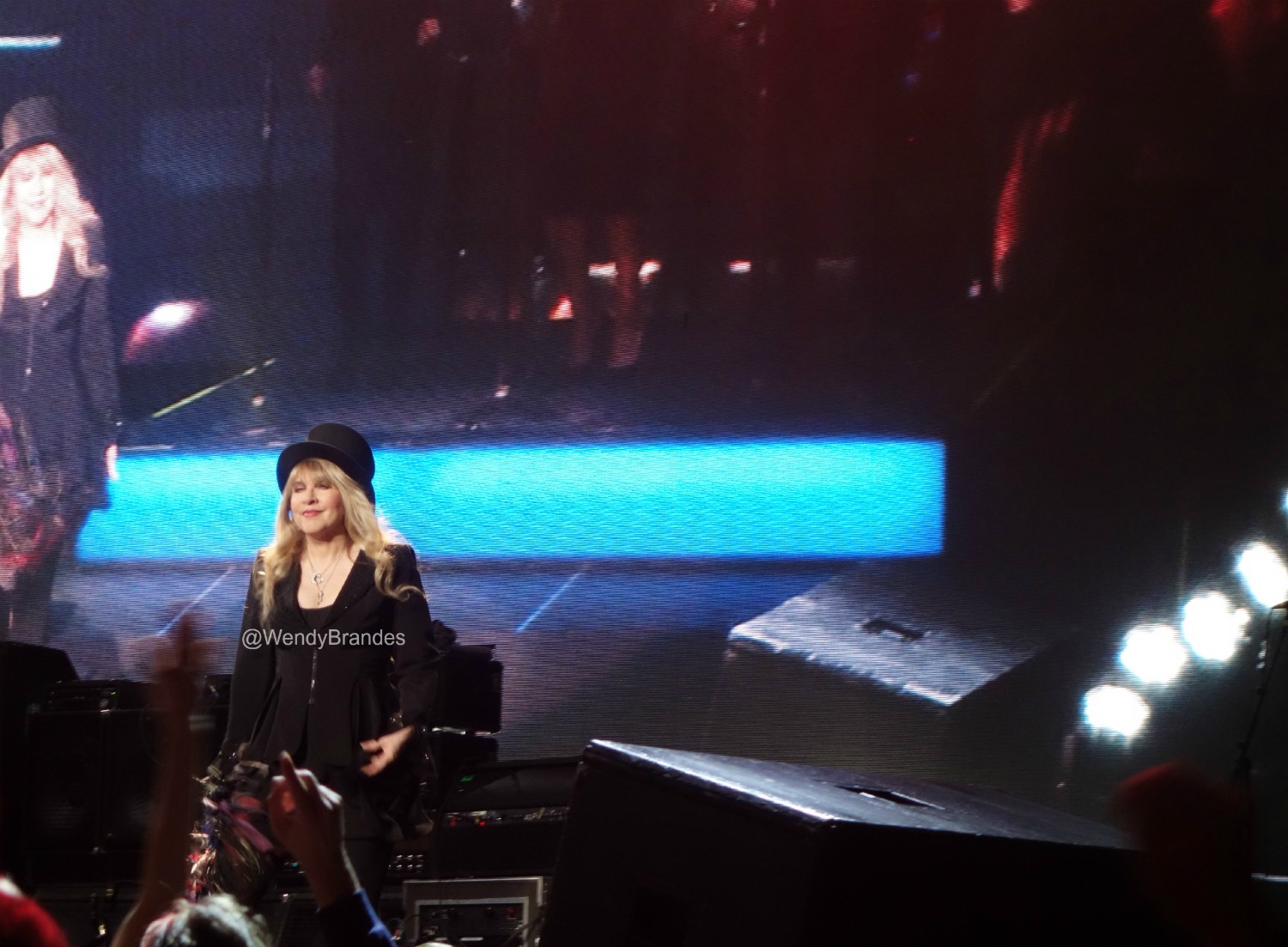 Love a gal with a top hat! Click to enlarge.

My other decent photos are going in my Flickr album here. My recording of the opening number, “The Chain,” was slightly disrupted by people walking by me to get to their seats. Another thing to keep in mind for Fleetwood Mac shows: they start promptly! Lights went out at 8:18 p.m. for an 8 p.m. show. I’ve gone to 8 p.m. shows that haven’t started until 10:30 p.m., which is why I was late to the October concert. But I’ve got 15 seconds of Stevie dancing wildly to “Gold Dust Woman” here.

I’d already worn my most Stevie Nicks outfit to the October show. I considered wearing my top hat, but didn’t want to block anyone’s view for the sake of fashion. (I did see quite a few top hats in the audience though.) If I couldn’t do a Stevie from the top, I figured I’d start from the bottom: cool boots and a twirly skirt.

I love that skirt and I need to wear it more often. You can see it has a few different fabrics in it; it’s also asymmetrical, which the photo doesn’t show. Now that I look at the picture, I don’t like that top with the skirt. I think I need something more nipped in at the waist or a belt.  But I felt good last night, so who cares!

Last week, Rolling Stone — which had Stevie on its cover — posted a 1976 clip of Fleetwood Mac performing “Rhiannon,” along with 17 reasons why that clip is the coolest thing in the universe. My favorite is #11: “Mick Fleetwood has a cowbell, but doesn’t bang it, because when you’re as cool as Mick Fleetwood, all you need is for the cowbell to sit there and listen to you.” The whole band truly is cool though, and Stevie is so stunning and charismatic.

Hopefully, after a certain age, we all grow out of magical thinking like, “If I had as much money as him, I’d be happy all the time. If I were as talented as her, my life would be perfect.” Eventually, you should notice that there are a hell of a lot of rich, talented, famous, beautiful, brilliant people who are fucking miserable and accept the fact that, no, you wouldn’t be some special exception. You take your baggage with you whether you travel by bus or by private jet. But, when Stevie sang directly into the camera in that clip above, I had a relapse of sorts and thought, “If I were her, my life would be heaven.” Then I reminded myself of all the drama that the band went through, plus the fact that Stevie has a hole in her nasal cartilage from cocaine (and possibly aspirin) abuse. And then I thought, “Maybe a broken heart and nose hole would be worth it.” I guess I’ll never know!

While I agree with Rolling Stone about the coolness factor of that clip, a fan on a Fleetwood Mac forum called The Ledge has a good argument for an even cooler, older “Rhiannon” video. As forum user SisterNightroad points out, in this performance, Stevie has yet to develop her signature witchy/gypsy style and is wearing a cropped pink blouse (albeit with flowing butterfly-wing sleeves) and high-waisted bell bottoms. 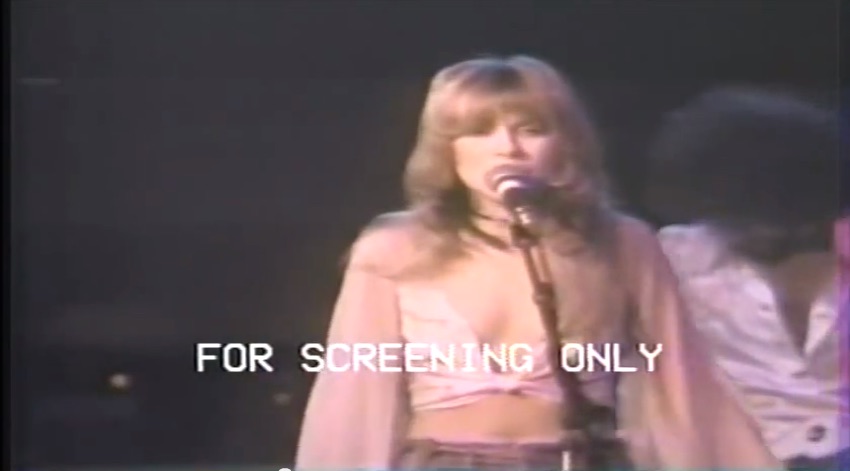 Whatever you do, never tell the diehard Mac experts on that forum that, for years, I thought the “Rhiannon” lyrics were “Dreams and wine, love’s a state of mind,” rather than “Dreams unwind, love’s a state of mind.” (And maybe I still sing it my way in my head because wine is a great thing.) Between the lyrics confusion and my amnesia about dates, I’d probably be barred from future Fleetwood Mac concerts. That would be bad because I really want to see the band at least one more time, so I can get as close as gorgeous Instagrammer Carrie Courogen did last night. She played Lindsey’s guitar — twice!

I literally can’t even!