It’s Madonna’s 56th birthday today and in honor of the big event I did something I’ve been wanting to do for a long time — photograph as many of my Madonna tour t-shirts as I could find. Here is Henry the dog inspecting 14 concert shirts. 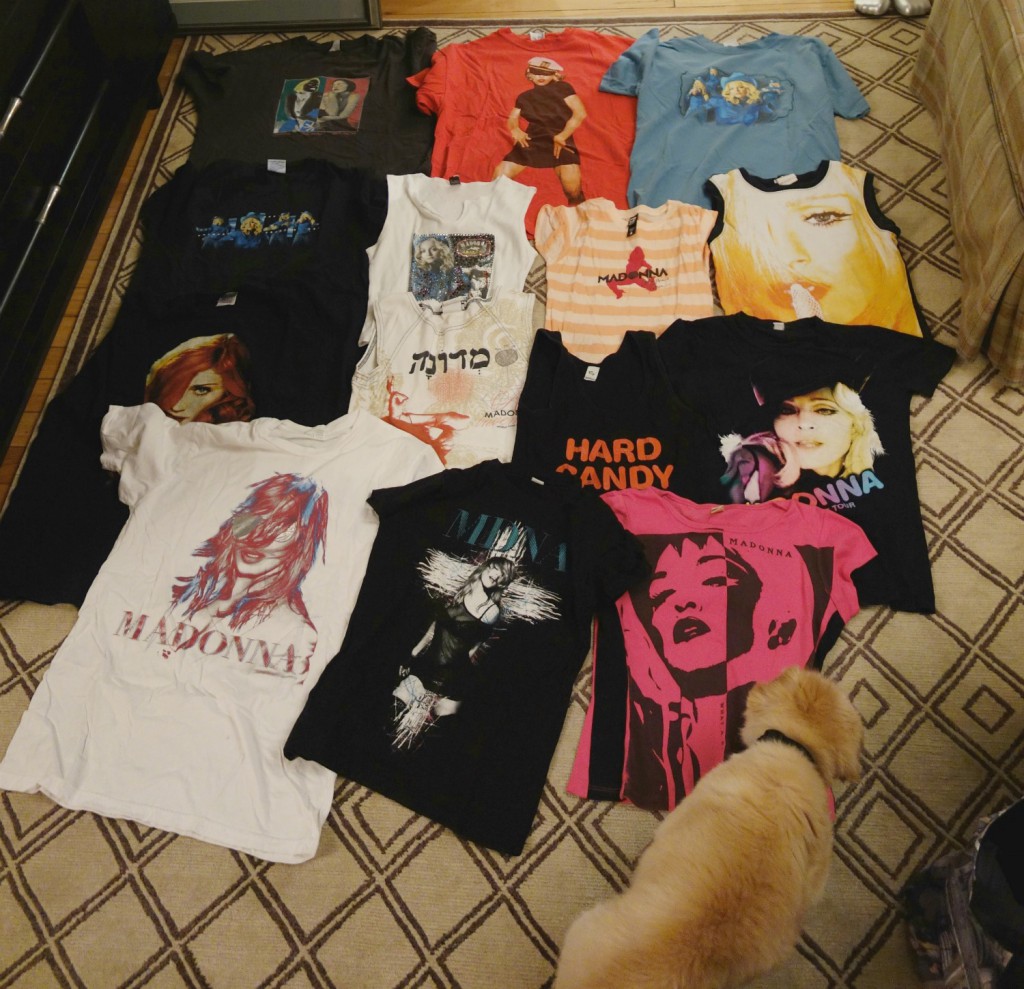 The oldest shirt is from 1990, in the top left corner. I’ve seen Madonna on every tour she’s done since 1985, so I’m missing two earlier shirts: 1985 and 1987.  I went to the 1985 show at Radio City Music Hall in lieu of my high-school prom, so I’m sure I got a shirt to mark such a momentous occasion. It could have been lost in my move back east after my freshman year at Northwestern University. One of the boxes I shipped home never arrived, and it contained my 80 rubber Maripolitan bangles — bangles just like the ones Madonna wore. I wouldn’t be surprised if my t-shirt was in the same box. In 1987, I went to a special charity show that Madonna did to benefit the American Foundation for AIDS Research. I have the program from that, but no shirt. Strange. For some other tours, I have two shirts, one for each show I went to.

A more recent acquisition that’s missing from the photo is my Yankee Stadium hoodie from 2012.  Where is that thing? I’m going to have to turn the apartment upside down looking for that. It’s got to be here somewhere.

Anyway, this represents nearly all of my wearable Madonna memorabilia, recorded for posterity at last. I guess the time I was “thisclose” to her Madgesty at an Oscar party in 2006, I could have made small talk by saying, “Hey, I have a lot of shirts with your face on them.”  Weirdly, I had no desire to talk to her. I didn’t want to ruin our relationship with an awkward conversation. I just want to see the queen on stage. That’s enough for me!

UPDATED TO ADD: Thanks to my friend Peter for letting me know that I originally and incorrectly wrote that Madonna was 55 instead of 56. Oh, the shame! I didn’t mean to deprive the world of one year of Madonna’s life!

You might also like
Concert Adventure, Part II: Eminem & Rihanna Monster Tour
Throwback Thursday: Madonna's Slow Fashion
Happy Very Belated Birthday to Me
Previous Post: « A Man and His Cat … and His Birthday
Next Post: The Weeks in Review »