The Grammys are tonight and Eminem’s “Berzerk” is nominated for Best Rap Performance. I hope rocker Billy Squier has been making mad money from that song, which samples Squier’s 1981 hit, “The Stroke.” Billy deserves it!

I have been meaning to write about Billy for years. I didn’t see him perform live in his heyday, but I’ve caught him twice more recently when he toured with Ringo Starr & His All-Starr Band. The last time I saw him — in 2008 — Billy kicked ass on stage. I loved his performance, which reminded me I loved his videos in the ’80s, so I jumped on the computer as soon as I got home to download his music. “The Stroke” is a great song, but my favorite has always been 1984’s “Rock Me Tonite.” Never heard much of Billy after that one, and I didn’t know why at the time. But, when I looked it up, I found it was the video for “Rock Me Tonight” that caused Billy’s skyrocketing career to crash and burn. Where did it go wrong? The blame has been cast on satin sheets, Billy’s sex kitten-ish dancing, his pink tank top, and that majorly awesome matching pink guitar. Basically, it was “too gay” for some uptight folks.

The career-ruining power of the video has bothered me since I read about it in 2008, for a variety of reasons. In the first place, it isn’t the gayest video of all time. That is the 1985 Mick Jagger and David Bowie clip for “Dancing in the Street.” Family Guy said it, so case closed.

And, speaking of Mick and Bowie, they are two of the examples I’ve provided before about the kind of performer that young girls had crushes on in the 1970s and 1980s. Let’s take a look at these flamboyantly dressed fellas (and a few more) again. Some of these guys were straight, some were straight but possibly open-minded, some were bisexual, some wouldn’t answer the question a la Ricky Martin decades later, some of them make you think “are people fucking blind?” — didn’t matter! They were all potential marriage material for lovestruck teens.

Back in 1972 — years before I could appreciate it — dancin’ Mick Jagger strutted his stuff in skimpy jumpsuits by my favorite vintage designer, Ossie Clark.

But I was right on time for Mick’s teeny, decollete t-shirt in 1981’s “Start Me Up” video.

As for Bowie, it’s hard to settle on just one of the gender-bending costumes that he wore while promoting his 1972 Ziggy Stardust album. I’ll go with this leotard. 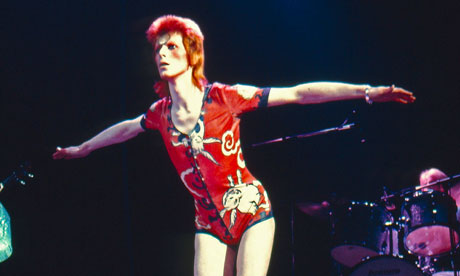 In the later ’70s, Freddie Mercury was perceived as straight while wearing this. 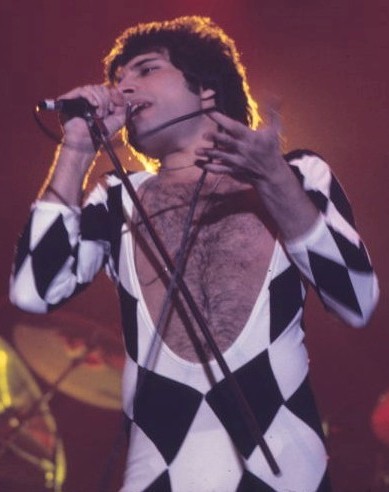 Not much different from Mick in the costume department, right? And I know it wasn’t just the girls thinking Freddie was straight, because plenty of homophobic guys were huge fans of “We Will Rock You.” Not even Queen guitarist Brian May initially knew that Freddie was attracted to men as well as women, and Brian’s a real-live rocket scientist!

In the ’80s — Billy Squier’s era — all the hot boys wore makeup and frilly clothes. Adam Ant was totally a ladies’ man. 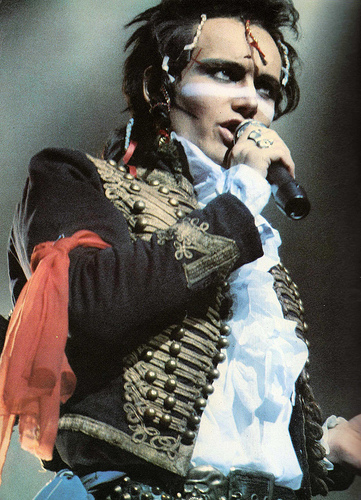 When a group of friends adored Duran Duran, the polite thing to do was divide up the band, so no one would get jealous of anyone else’s imaginary boyfriend. I was all about John Taylor, especially during his burgundy hair phase. OMG. 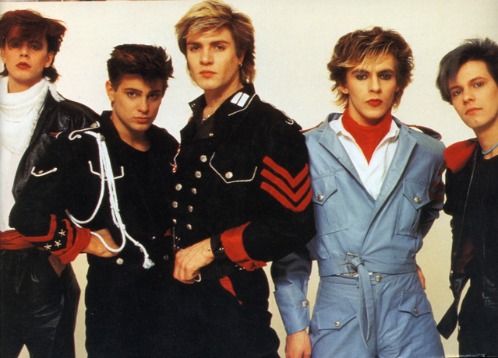 I was initially interested in Nick Rhodes too, but I had to let my friend have him.

Prince wasn’t an English “New Romantic,” as Duran Duran and Adam were labeled, but he sure looked the part, with the eyeliner, ruffles and high heels. 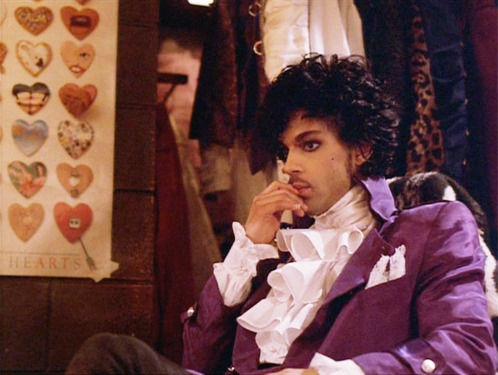 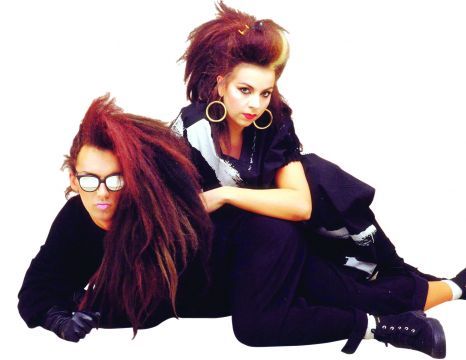 Then there was Boy George. Parents were suspicious of him right away: “He might be gay!” But we girls held out some hope at first, imagining ourselves sharing makeup and hair ribbons with him. 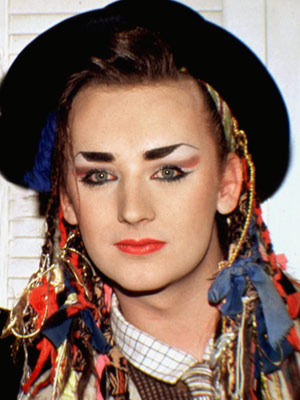 With all of these peacocks gyrating in skin-tight clothes (excluding George) and/or flaunting luxurious hair and heavily-applied makeup — why did poor Billy Squier suffer for his pink t-shirt video? This is the question that has tormented me. Maybe he didn’t go far enough. He was neither the dude next door nor the over-the-top showman. If you’re going to go there, you better go all the way, I guess. He had the hair for a glam-rock Marc Bolan look, for sure. After the video disaster, sales kept declining and Billy stepped away from the music business in 1996. But he seems to be having fun with it now, so good for you, Billy Squier! I hope you kept that cool pink guitar.

Billy wasn’t the only one of Ringo Starr’s buddies to pop up on Eminem’s Marshall Mathers LP 2, for which “Berzerk” was the first single. I saw Rod Argent of the 1960s group the Zombies during the All-Starr Band’s 2006 tour. The audience went wild at the first notes of the Zombies’ “Time of the Season.” Last year, Argent told Rolling Stone that he was happy that the song was sampled on MMLP2’s “Rhyme or Reason.” That 2006 Ringo show sent me running home to download the Zombies and, if I recall correctly, “Time of the Season” was available but my favorite song, “She’s Not There,” wasn’t for sale on iTunes for years. I checked for it regularly, and when I finally found it, I felt like a major mission had been accomplished. Another good Argent song is from his post-Zombies band (which was called “Argent”) — 1972’s “Hold Your Head Up.” I find it weirdly hypnotic.

So Ringo Starr was connected by degrees to Eminem’s album and therefore to the Grammys even before it was announced that he will perform with my almost-husband Paul McCartney to celebrate the 50th anniversary of the Beatles’ first concert in the U.S. Ringo has been on my mind a lot lately, not only because his All Starrs keep turning up in hip-hop, but because I’m reading Mark Lewisohn’s hefty Tune In, the first of a trilogy on the Beatles. This book doesn’t even get them to America. It ends in 1962, after going in-depth into their childhoods and early days performing in Hamburg. The stories about the band members’ families are fascinating — I’m impressed by how many out-of-wedlock children there were among the grandparents and great-grandparents. You’d think the good old days were so conservative, but there was some wild stuff going on in the late 1800s and early 1900s. As for Ringo, he almost died of illnesses twice as a child and he’s been through some more shit since then, so he’s a tough guy.

Ringo was at a pre-Grammy lifetime achievement ceremony with Beatles wives Yoko Ono and Olivia Harrison, but his former bandmate, my almost-husband, was tied up with rehearsals. (Ringo is so fantastic he doesn’t have to rehearse!) Paul did attend the star-studded Beats Music launch party Friday night, where Elliott Wilson Instagrammed this photo of Sir Paul and Ringo’s musical beneficiary of sorts, Eminem. 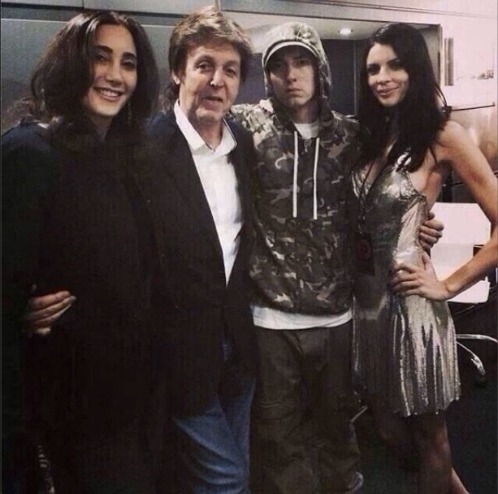 The lady on the left is my almost-husband’s actual wife, Nancy Shevell. Don’t worry, I gave her my blessing! I believe the lady on the right is Liberty Ross, the girlfriend of Beats and Interscope executive Jimmy Iovine. Liberty Ross had some personal upheaval prior to Jimmy, and if I wanted to keep doing the Ringo Starr connection game, I could link him to the Twilight franchise. But I don’t think I need to continue. Isn’t it obvious that it’s Ringo’s world and we just live in it? Do not stare too intently at this photo, or you will do his bidding forevermore. 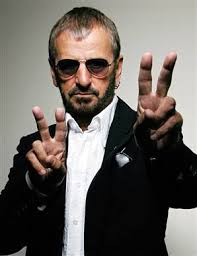 You might also like
Yelawolf and WendyB, the Goddess of Rap
Throwback Thursday: A Cool June Night With Beyoncé
The Week in Review
Previous Post: « Henry the Dog Is Special
Next Post: My Best Dressed at the Grammys: Hat-Loving Pharrell Williams »