Today is the 219th anniversary of Marie Antoinette’s execution by guillotine. I first created a ring in the French queen’s honor in 2008. Many of my jewelry designs are inspired by royalty, and no royal-themed collection is complete without an Antoinette piece. 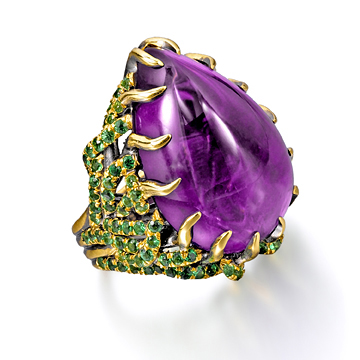 My ring, in the royal colors of purple and green, features a custom-cut amethyst that weighs over 27 carats. The amethyst is surrounded by 118 tsavorites set in 18K yellow gold.  The creeping, thorn-like prongs symbolize the way Marie Antoinette was entangled in a tragedy not of her own making. The seeds of the French revolution were planted long before Antoinette became queen. After all, it was Louis XIV — the great-great-great-grandfather of Antoinette’s husband Louis XVI — who lavished money on the palace of Versailles and created the rigid and extravagant social order in which aristocrats were entirely dependent on, and jealous of, the king’s favor. (To put the timing in perspective, Louis XIV, who held the throne for 72 years,  died nearly two years before the queen’s mother, Empress Maria Theresa, was born.)

France incurred great debts under Louis XIV due to his wars as well as the creation of Versailles, and neither his great-grandson, Louis XV, or Louis XVI were well-equipped to handle that legacy. Certainly, the young woman baptized Maria Antonia Josepha Johanna and married off at the age of 14 — the undereducated 15th child of Maria Theresa and the Holy Roman Emperor Francis I — couldn’t influence much except fashion and social behavior, and even then she caused controversy. (The Queen of Fashion: What Marie Antoinette Wore to the Revolution, a book by Caroline Weber, does a good job of explaining the consequences of defying the traditions of Versailles.) Marie Antoinette, as she was known after she left her homeland of Austria for France, and her husband were still teenagers when Louis XV died of smallpox and his grandson became Louis XVI. It was reported that upon receiving news of the king’s death, the couple fell to their knees, weeping, and cried, “O God! guide us, protect us; we are too young to reign.” Indeed.

I always wanted to make earrings to match the Marie Antoinette ring. I like to do multiple variations on a theme. September’s Jewel of the Month, for instance, was the latest in a line of designs inspired by Juana la Loca of Spain. But earrings are a challenge. They require the same kind of delicate, expensive work that a ring does — times two. In addition, I have to find a way to make that work lightweight enough to be worn comfortably on the earlobes.

I finally had the time and money to start working on the Marie Antoinette earrings late last year. It was slow going. I had to get two 25-carat amethysts specially cut.  I needed a particular size tsavorite to fit the 18K-gold wire I was going to use to wrap the amethysts, so those stones also needed to be custom-ordered too. When I received the tsavorites after many weeks of waiting, they were too light in color. I had to send them back to the gem-cutter and order a new batch. When the right ones arrived, the setting took a long time. That’s what happens when you have to set a total of 404 tiny stones. But here are the earrings, at last, in time for the anniversary — they are October’s Jewel of the Month. 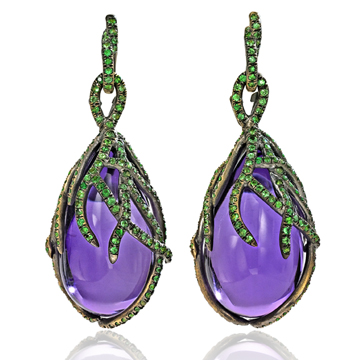 These earrings are handmade in the truest sense — there is no mold for the metal work, or standard size for the gems. If I were to do a second pair, it wouldn’t look exactly the same as this one, so it’s safe to say this particular design is one of a kind. As with some of my other ultra-luxurious designs, the price is available only upon request.

I look forward to spending quality time with these earrings someday, but not too soon — right after I finished them, I sent them off to be considered for a design competition and the longer they stay in the running, the better. I hope judges agree with me that these earrings are fit for a queen.