Gorgeous designer/blogger Stacy Lomman presented her Fall 2012 collection on February 16. The “Modern World” looks of this collection — her fourth — were inspired by ’60s Mod, especially Courrèges, who is a longtime fashion hero of Stacy’s. But the styles weren’t costume-like or vintage-looking. They’re modernized Mod, if you will. Here, let Stacy tell you more herself.

When the show started, I thought, “Only one in a million people could pull this off.” 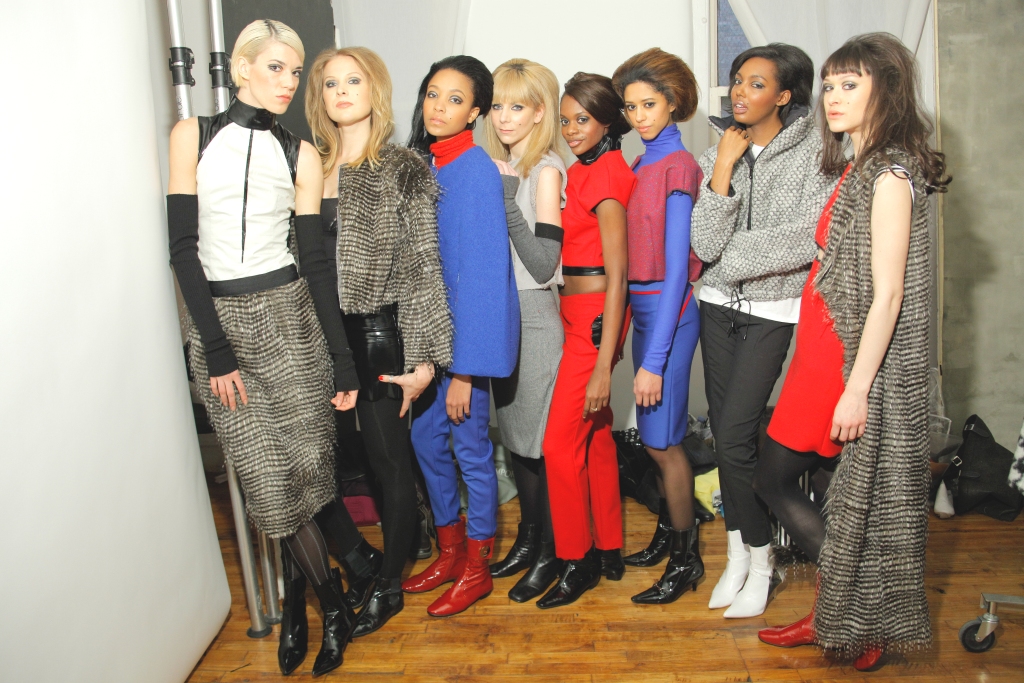 The models backstage in their first looks. Photo by Randy Brooke. Click to enlarge.

Stacy lives about two blocks away from me and I see her often. Even if I don’t see her, I’m in touch with her by email with her throughout the day. I also did what I could to help her backstage, so I know what kind of effort went into this.  Stacy made 13 looks — totaling 26 pieces — by herself. No help from FIT interns, garment-center seamstresses or industrial-quality sewing machines. She frequently worked more than 24 hours at a stretch. The more complicated pieces — such as her quilted, reversible jacket — required as many as 50 hours of labor. The wool popcorn-stitch side of that jacket can be seen in the group photo above, second from right. Here are two other views of it. 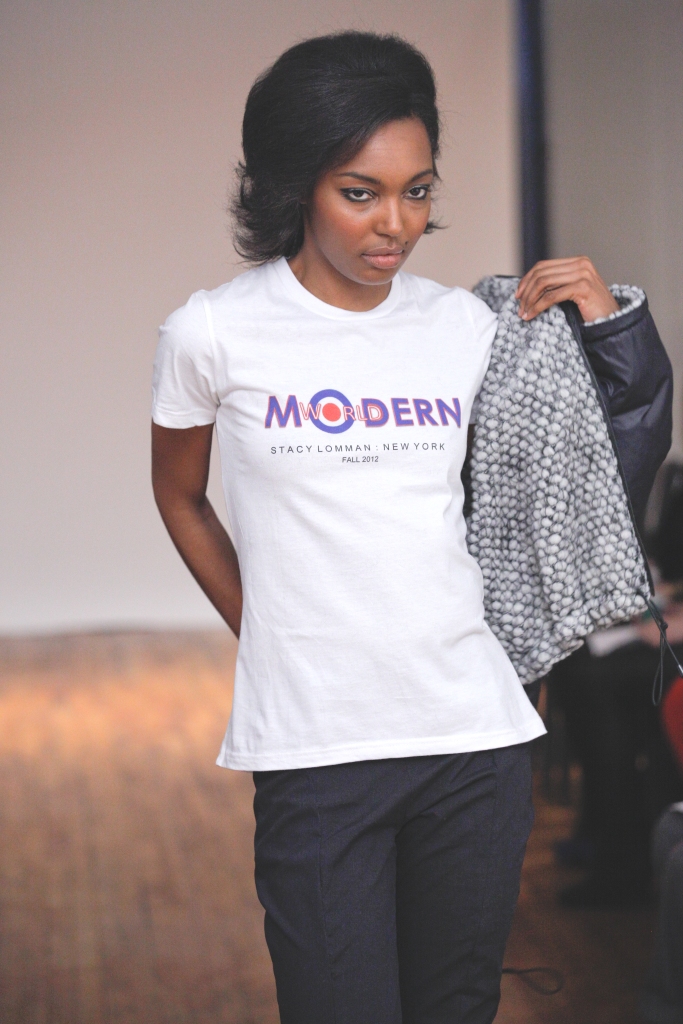 Model Alexius slips out of the reversible jacket on the runway … 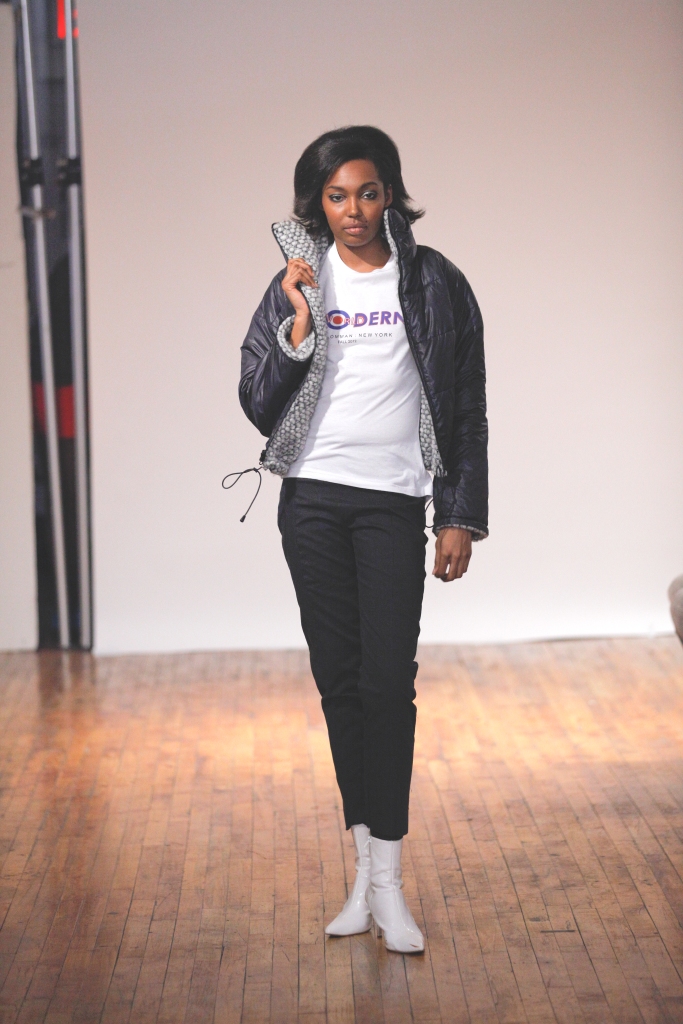 … and strikes a pose with the quilted nylon side showing. Both photos of Alexius by Randy Brooke.

Stacy did this on a shoestring, with $6,000 she raised via Kickstarter with the help of friends and family, including some of you readers. (Susan Tiner, you saved the day.) She technically raised $6,910, but Kickstarter and Amazon, which Kickstarter uses to process payments, take a fee. On Kickstarter, a “crowdfunding” site, you set a target goal and don’t get any of the funds unless you hit that goal. So, even though Stacy had her sketches completed and fabrics selected in December, she didn’t start draping, patterning, cutting and sewing until January, when she had a better idea of how her fundraising was going.  That gave her about five weeks to make her 26 pieces from scratch. She also had to design the invitations; compile a mailing list and send out the invitations; find a venue that was within her budget; hold a model casting/fitting; put a hair and makeup team in place; search eBay for appropriate shoes for the show; download and mix her music, and visit the garment center several times a week to purchase zippers, shoulder pads, lining, fusible and other supplies. 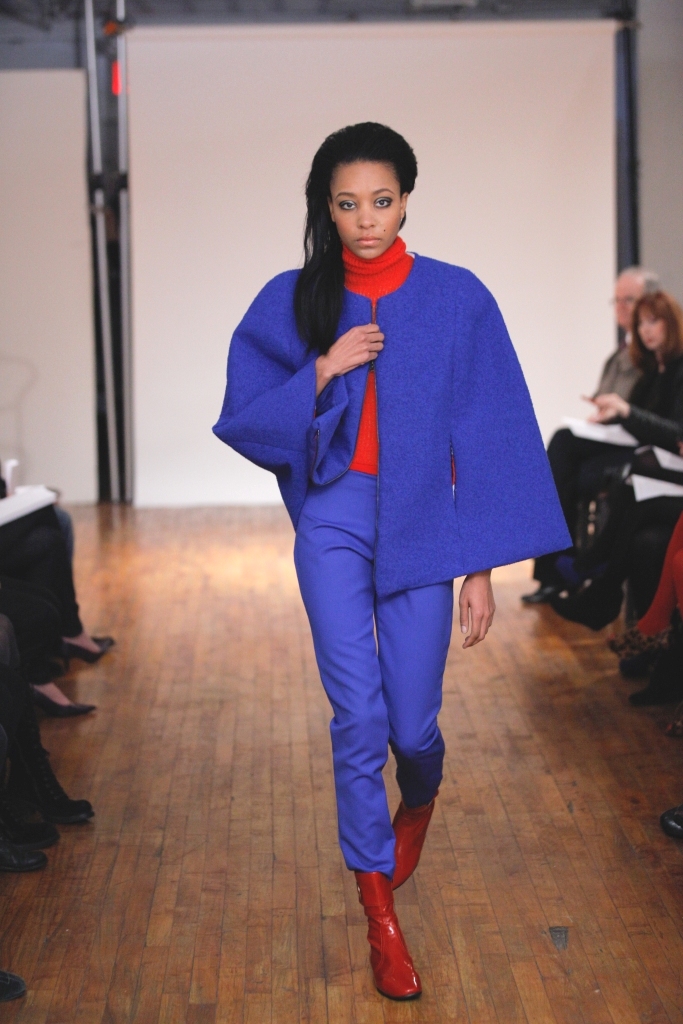 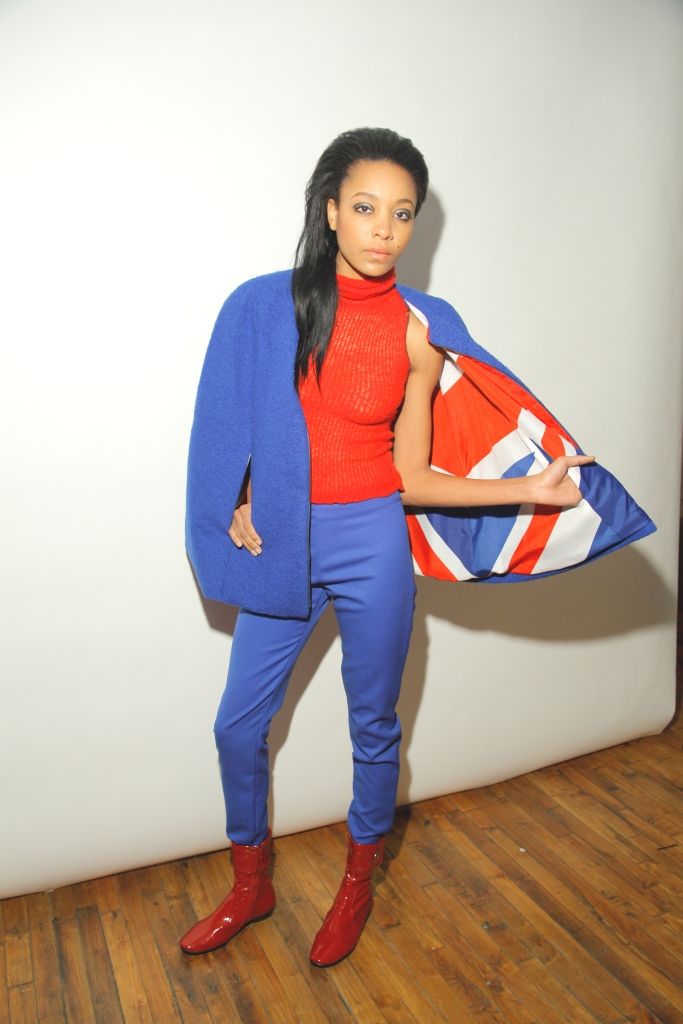 Que shows off the Union Jack lining of the cape. Both photos of Que by Randy Brooke.

Stacy wound up spending more than she raised, as we small-business people often do. The money went to fabric and the other garment-center supplies; shoes, t-shirts and tights for the models;  the models themselves; hair and makeup; photographer; videographer; venue; chair and garment-rack rental; a listing in the Fashion Calendar and other sundries. There was no money for public relations, lighting or a sound tech. And the Kickstarter money didn’t cover the prizes she offered as enticements on the site, so she’ll have to find a way to pay for those separately. I’m doing my bit to help by ordering a number of pieces. Of course, that’s not selfless of me at all because I want the pieces desperately. Stacy’s first show in September 2010 was great, so it amazes me that she continues to grow in leaps and bounds. (I wrote about her other two shows here and here. You can see me wearing a jacket from her Fall 2011 collection here. I wore a custom-designed dress by Stacy when I won Fashion Group International’s Rising Star award in January.)

It was hard for me to narrow down what I wanted but here are my picks. (I’m going to be brave and put my blurry iPhone pictures next to the professional runway shots.) First up is the oversize-houndstooth trench with patent leather trim and rib-knit sleeves.  I didn’t see this until the day of the show, when I went to Stacy’s apartment to help her load everything into the car. I immediately said, “I want this one.” 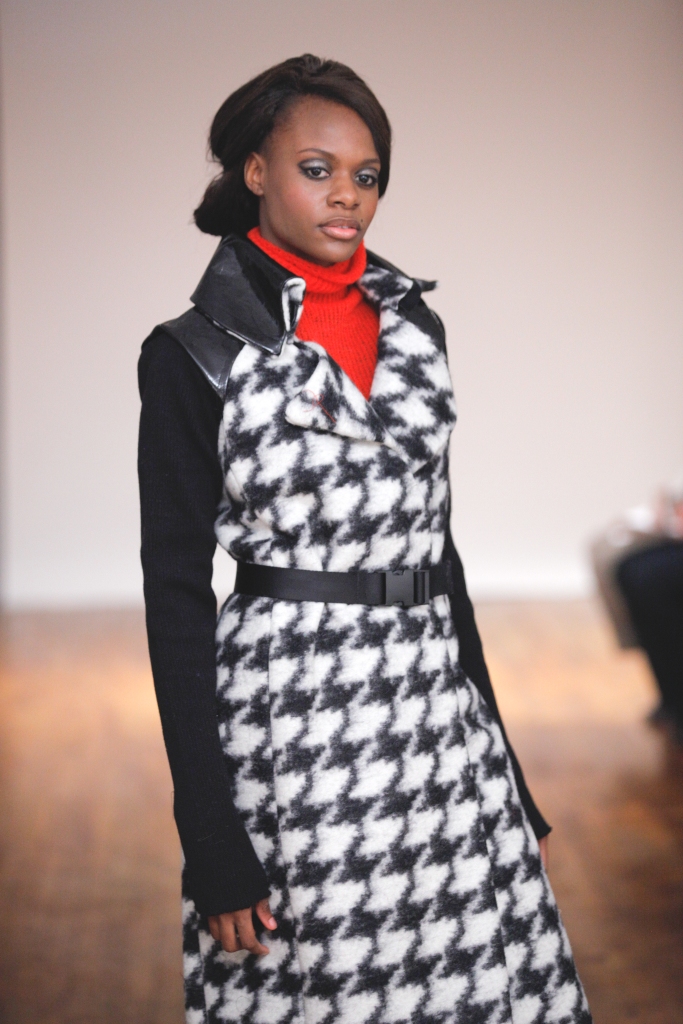 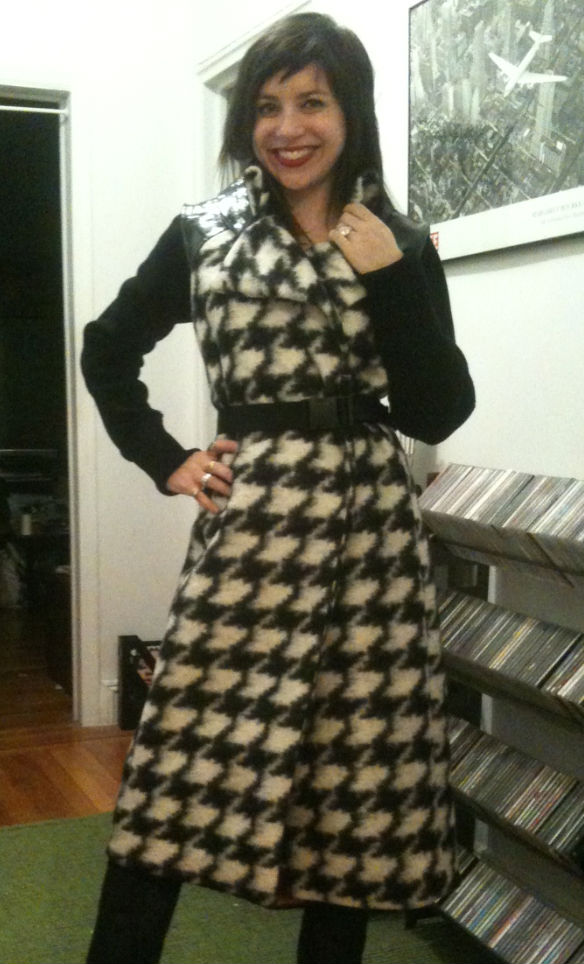 Stacy is going to hem this for me. I’m think I’m half a foot shorter than Danielle.

Stacy found a fascinating faux-ostrich-feather fabric; you can see in the models’ group photo above in the first and second looks on the left and the last look on the right. The short jacket is lined with black-and-white striped silk charmeuse. 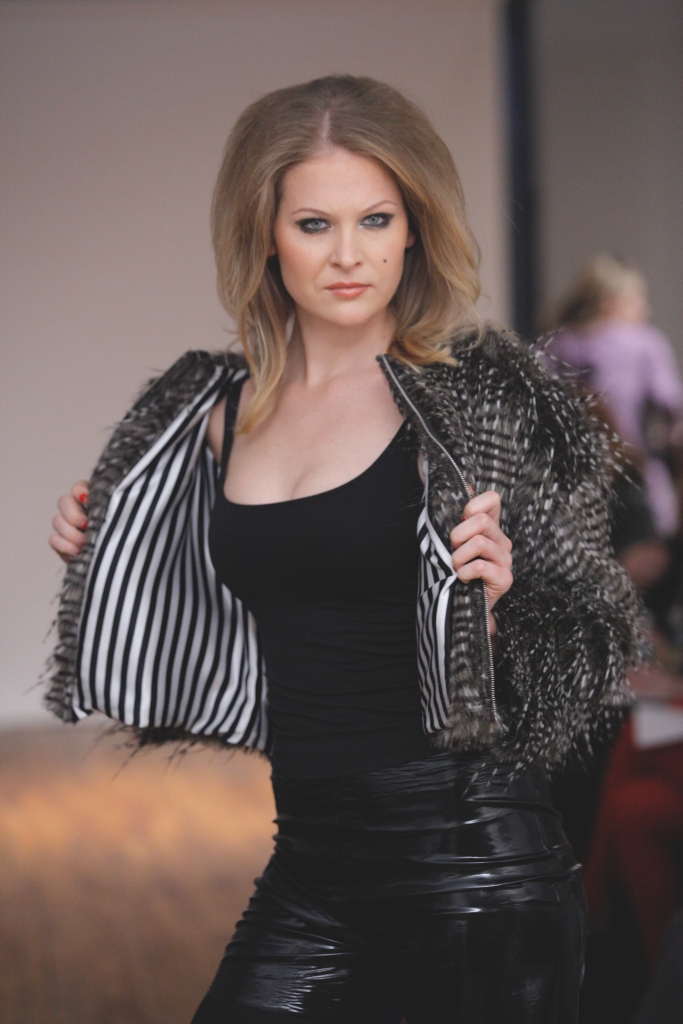 Alexandra reveals the striped lining on the runway. Photo by Randy Brooke. 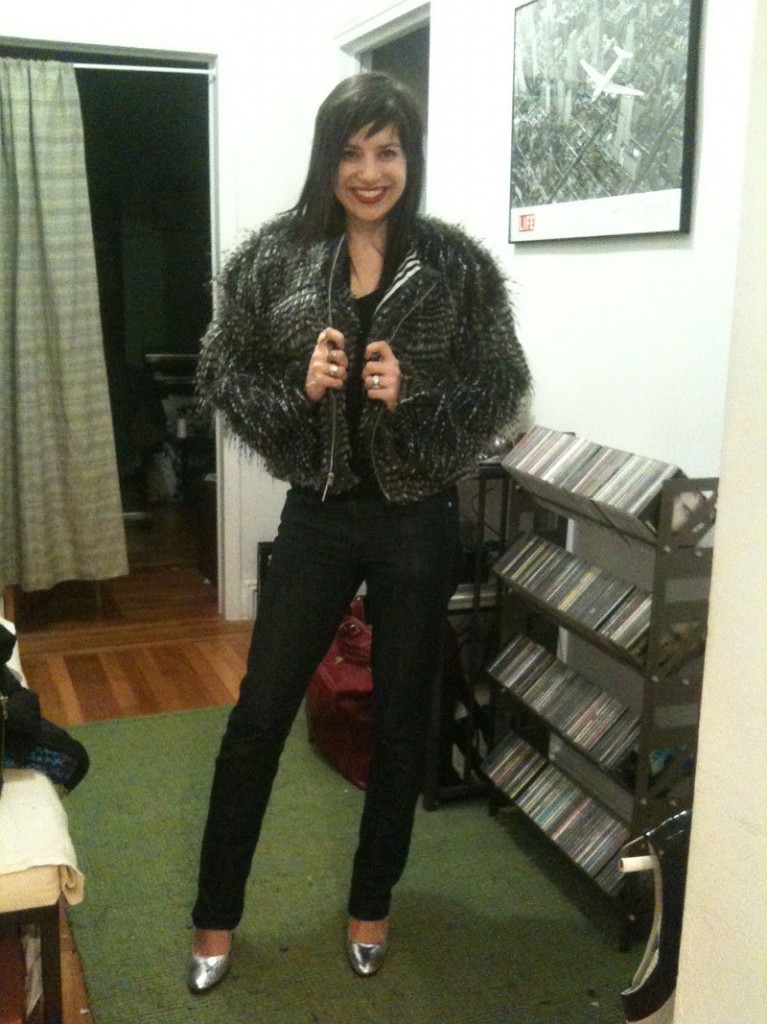 During the try-on, I’m was wearing the eight-year-old Prada wedges I mentioned in a recent post.

I’m obsessed with the royal gabardine racer-back dress with red trim. Stacy wanted to make me a new one, but I’ve asked her to alter the sample for me because I can’t wait. 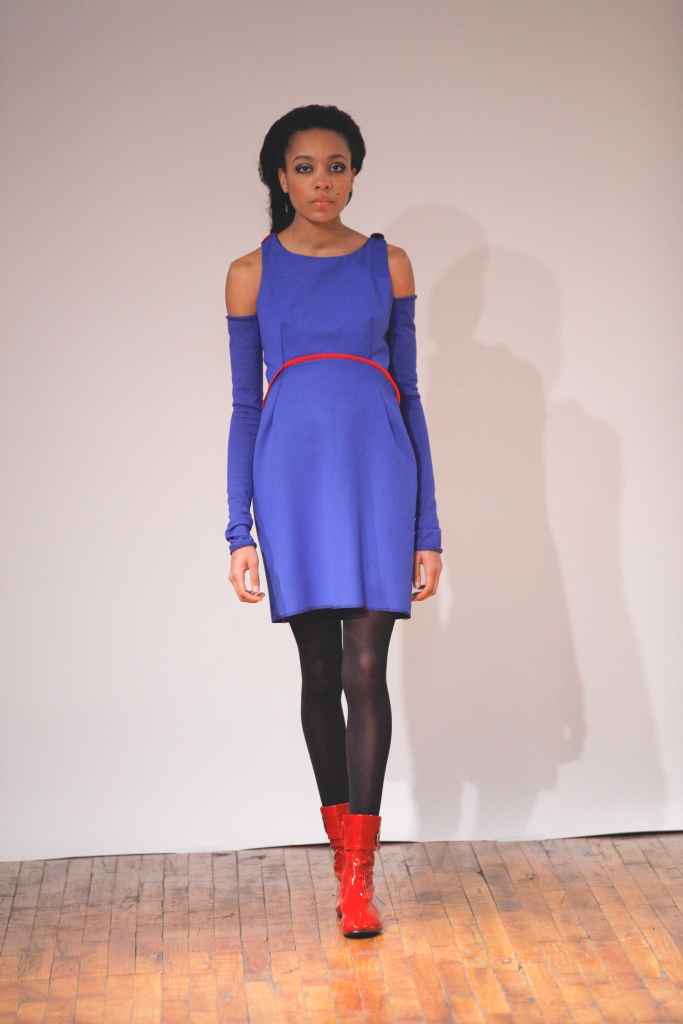 Model Que wears the dress with arm warmers on the runway. Photo by Randy Brooke. 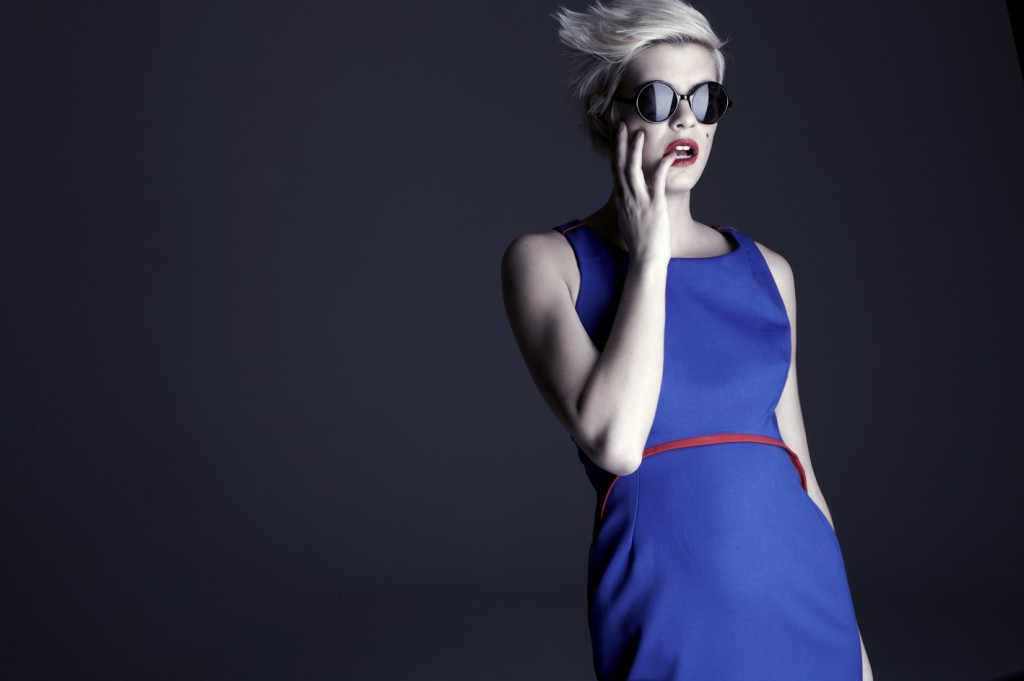 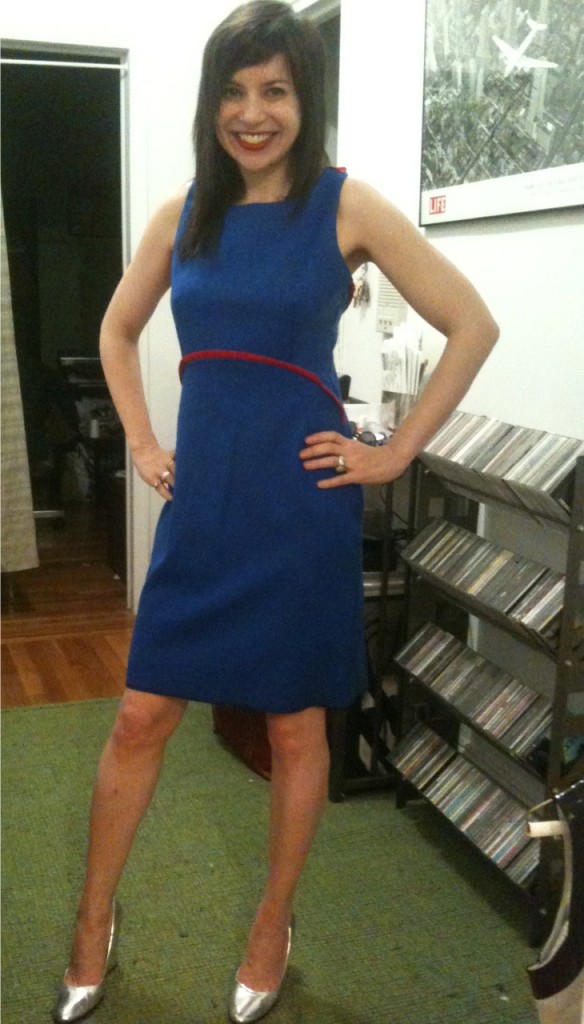 The front view on me. 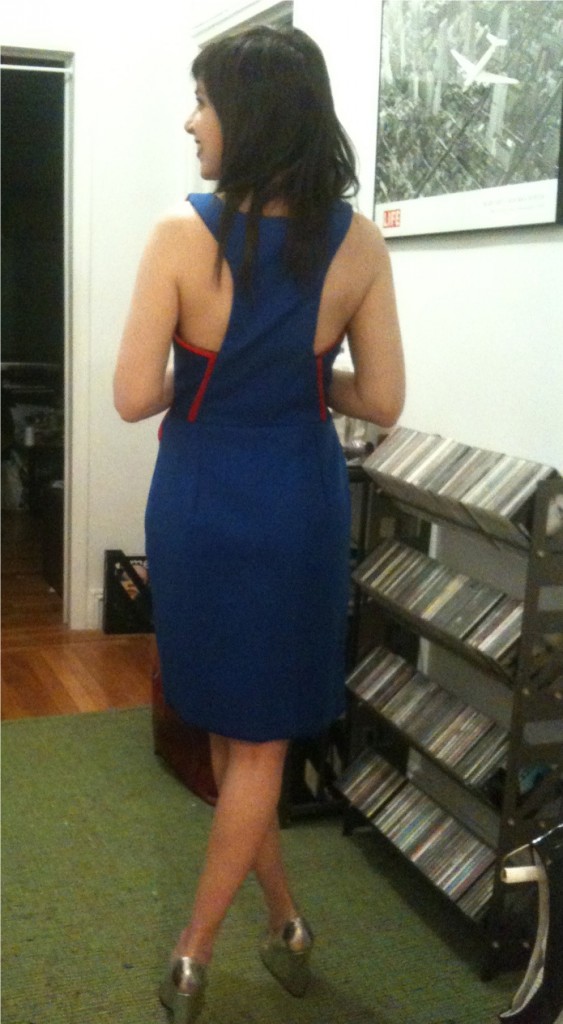 I’m still tempted by the reversible jacket, but I have so many jackets.  Hmmm. It looks good and it’s warm too. Maybe we’ll have a real winter next year and I’ll need it.

Luckily I know the designer and can always place a late order.

Speaking of late, it’s taken me this long to write about Stacy’s show because I was so aggravated after it. I wasn’t aggravated with Stacy, obviously, but at the important people who RSVP’d and didn’t show up. (Crap & Couture mentioned that here.) I wasn’t sure if I should come out and say what I think of that, or if I should be diplomatic for once and keep my mouth shut. Well, why start being diplomatic this late in life? Here’s the truth. I think editors and buyers would be all over Stacy if she were a 20-something boy with Bambi-like eyes; if she were a precocious teen whose parents have time to take magazine-worthy photos of her; if she were a stylist/former editor/celebrity; if she were either weirdly unstylish or dressed like a fashion-forward lunatic; or if she were part of a family business. Those are the sexy stories. (The New York Times just devoted about half a page to a 24-year-old boy who’s taking over his father’s art gallery. I wish him well. He might be the best art gallery dude ever. But really? His father’s gallery deserved that much print?)

It feels like no one is interested in the regular person who has spent decades honing her craft at less-than-glamorous jobs before going out on her own to attempt the impossible. For people like that, the axiom “It takes ten years to be an overnight success” applies. Personally, I’ve always thought, “Yeah, I can stick it out; I can pay my dues.” But I’ve realized it’s one of those things that’s easier to say than to do — like the often-impossible “knock yourself off before someone knocks you off.” Willpower and persistence aren’t enough. You also need money to put into your work and to live on. You can run out of cash before you get enough orders to keep yourself in business. I’m not saying having a frenzied crowd at a single runway show is everything. I’m the first person to point out that fame doesn’t equal fortune. I know perfectly well that you can be plastered all over the press, sell in all the important stores, win awards — and go out of business or struggle for years to make money. Stacy herself was nominated for an FGI Rising Star award in women’s ready-to-wear this year! You can even be the wife of a billionaire, with a company that gets lots of press and turns a profit, and go out of business. I’m just saying to the corporate types that if you bother to RSVP “yes” to an entrepreneurial event like Stacy’s, have the fucking courtesy to show up. First of all, that seat could have gone to someone else. Secondly, I’m going to remember your behavior when Stacy does become an “overnight success”; I hope you enjoy your standing-room-only placement at Stacy’s future hot-ticket show.

Here’s all the info you need to keep track of Stacy Lomman: