I swear to God, this is a picture of Fernando von Bakonstein (pinkish blotch in foreground) and Lauren Bacall (blurry lady in background) at a dinner for the Tribeca Film Festival. 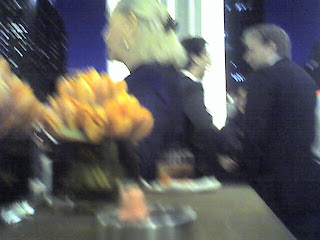 I don’t know when I’ve ever seen so many famous people in one place! In addition to Bacall, I ogled Jerry Seinfeld, Larry David, Bette Midler, David Bowie, Iman, Billy Crystal and many others. I managed to bring Fernando but no camera — I was all crazed due to fashion confusion — but I stealthily took the blurry photo with my cell phone.

My fashion confusion stemmed from the sudden arrival of a vintage Patrick Kelly dress that I bought on eBay. Originally, I bid on it and forgot about it, so I was stunned when I won it. Then I paid for it and forgot about it again, so I was surprised when it arrived today. Then I was amazed a third time when I realized it was floor length. (The good thing about early senility is that life is full of surprises.) When I tried it on and it fit, I decided I’d never have the nerve to wear it if I didn’t wear it immediately. 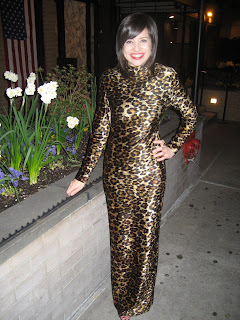 My friend Jane had her camera and took a picture of me with Fernando, who is off to a good start on the NYC leg of his journey. 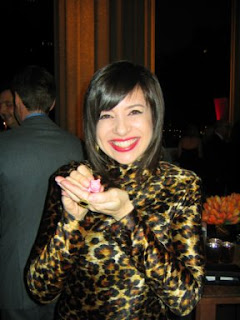 Oink!
You might also like
What Wendy Wore: Sequins, Then and Now
What Wendy Wore: The Last Winter Look?
Things That Have Fascinated Me Recently
Previous Post: « Hello, Lovahs
Next Post: Gorgeous Client/Blogger/Model Kim »