Gorgeous blogger Stacy of taffetadarlings came over to watch the Oscars with me last night. I wasn’t excited by the fashion. These days, a red carpet isn’t a red carpet for me if Gaga‘s not on it. I know she’s not an actress, but who cares? The producers recognized Michael Jackson in the memorial video even though The Wiz, a theme-park film and a posthumous concert film aren’t a particularly impressive cinematic oeuvre.

I spent the whole show complaining about the popularity of a color that reminds me of cement. The Hollies sang about a long cool woman in a black dress. Walter Mosley wrote about a devil in a blue dress. Has a cement dress ever inspired art? No. Do you ever say to anyone, “Wow, cement really flatters your complexion!” Doubt it.

Here are some of the women in various shades of cement. Winner Kathryn Bigelow …

… and Helen Mirren in sparkly cement.

Mia Wasikowska wore cement the day before to the Independent Spirit Awards. Just say no to cement, kids!

The look I liked the most belonged to a woman with a mohawk who had taken over my old job of lurking near George Clooney on the red carpet. I am desperately seeking a picture of her so if you find one, let me know. I love her hair and want to see the rest of her outfit.

Other than the mohawk sighting, the most thrilling moment for me was when purple-clad Elinor Burkett pulled a Kanye West during the speech for best documentary short. Crazy is the new chic!

UPDATED TO ADD: The mohawk lady has been found! Thanks to Full Frontal Fashion for posting the picture and gorgeous blogger Dream Sequins for pointing it out to me. 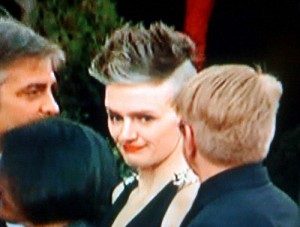 You might also like
My Best Dressed at the 2016 Critics' Choice Awards Is ...
2019 Golden Globes: The Best of the Rest
Throwback Thursday: Celine Dion's Oscar Tux
Previous Post: « Oscars Memory: Red Carpet With George Clooney
Next Post: Jewel of the Month: Freudian Links »