Like I said yesterday, crazy is the new chic, so my sterling silver Sigmund Freud cufflinks are the Jewel of the Month. 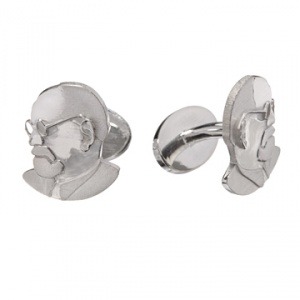 These cufflinks would be a thoughtful gift for the well-dressed psychiatrist, psychologist or psychopath in your life.  People who don’t fall into any of those categories like the cufflinks too: MrB, who is neither in the medical profession nor certifiably insane, loved them so much that I gave him his own set. When he was interviewed by Canada’s National Post recently, the cufflinks got their own shout-out: “Dapper in silver Sigmund Freud cufflinks made by his wife, he is a veteran journalist who retired from the top of one of the world’s top news operations to pursue his vision of public service...”

I never would have gotten that nice, though nameless, mention if it weren’t for gorgeous blogger Jill of Trend de la Creme. She requested a Freud design as a gift for her husband for his graduation from medical school. I liked her idea and the result so much that I added the design to my line. This is the second time I’ve added a custom-ordered cufflink from a Jill to my line: the first was Mud Flap Jill.

Most custom work doesn’t make it into my line. Sometimes, the design is very specific to the client, like these dog cufflinks. Other times I’m creating a new design for a client’s old gems, in which case I’ll do a one-off, hand-made setting that accommodates the exact sizes and shapes of those stones. Sometimes a client specifically requests a piece that will remain forever one-of-a-kind.

If I do want to add a custom design to my line, I’ll ask the client. And when that happens, it’s the client’s lucky day because she is going to save some money. Why is that? The short answer is that I’m going to absorb some of the manufacturing costs that the client would normally pay for a one-of-a-kind piece. Of course, with me there’s always a long answer too. Come back tomorrow for that. Right now I have some Freudian issues to deal with. Did you know that the famous quote “Sometimes a cigar is just a cigar” is merely attributed to Freud? It hasn’t been proven that he said it or wrote it . (Rudyard Kipling was the one who wrote, “And a woman is only a woman, but a good cigar is a smoke.”) Freud definitely did write, “What does a woman want?” He said it was a question that had never been answered. That drives me fucking crazy, no pun intended. The Wife of Bath’s Tale in Chaucer‘s Canterbury Tales is all about that question and explicitly answers it: “Wommen desiren to have sovereynetee” (“Women want to have sovereignty“). I especially like these two lines: “And eek I praye Jhesu shorte hir lyves/That noght wol be governed by hir wyves.” (Translation: “And I pray that Jesus shorten the lives/Of those that won’t be governed by their wives.“)

In addition to sovereignty, some women might want a necklace version of Freud, so I’ve got one in sterling silver for $275. Email me at wbjewelry at hotmail dot com if you’re interested!

You might also like
New Rings Galore: Daisies, Skulls and Punctuation
Gorgeous Ex-Bloggers Wear WendyB
Shopping My Closet for the Hot Emmys Color Combo
Previous Post: « At Least There Were No Cement Shoes
Next Post: Get Smart (About Custom Work) »