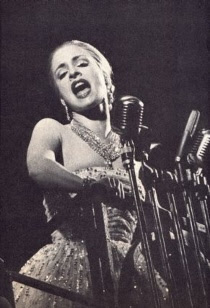 Patti LuPone in Evita back in the day
As I mentioned on my wrongly-blocked-by-Google blog, Patti LuPone is one of my obsessions. So today is a happy day, my peeps! I have tickets to see Patti (again) in Gypsy. The show has moved to Broadway! Get your tickets at telecharge.com. If you go, keep an eye out for me at the theater. I will be wearing a Patti LuPone t-shirt and have mascara’d tears of joy all over my face. I know what you’re thinking. “But WendyB! The whole audience looks like that! How will I know which one is you?” Don’t panic. It will be simple. Everyone else with that look will be a gay dude. Just look for the one lady in the crowd. That’s me! 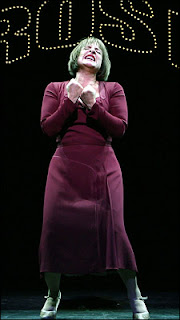 Patti as Mama Rose in Gypsy

Here is where I previously shared a link to Patti LuPone on Will and Grace. In the scene, Jack, who had been obsessing over cutting off a piece of Patti’s hair to make a Broadway divas wig, is trying to ignore her in an effort to be nice to Will for a change. Stand back, Buenos Aires! Anyway, NBC is a bitch and keeps taking down this clip whenever someone posts it, so don’t bother clicking. It’s not like it gives away the whole show!

As consolation, here is a wonderful video of Patti on the Merv Griffin show at the time she was in Evita. Now I am more in love with her than ever. She speaks very intelligently about Eva Peron. There was quite a lot of controversy over the play, as there was over Eva during her lifetime. I think Patti sums up Eva’s situation very well: “she played the game the way it was being played” yet she was somehow considered to be more reprehensible than the men who created the power structure in the first place. Women traditionally have been demonized for behavior that in men is considered business-as-usual for a certain time and culture. I pointed this out in my post about Empress Wu.

Enough ranting. Behold the beauty of Patti LuPone in her red lipstick and slinky ’70s outfit.

*I originally posted this on my emergency backup blog while Google had this blog frozen. I’m just reposting it here.