I am going to prove to you that Anne of Cleves was a damn genius.

Anne was the fourth wife of Henry VIII, or Henry teh 8, as we’ve come to know him. Did you know that in the ’60s, the English group Herman’s Hermits had a hit song called, “I’m Henry the 8th, I Am”? If you’ve ever seen the Demi Moore–Patrick Swayze movie, Ghost, you’ll remember the song. Patrick Swayze, the ghost, sang it to Whoopi Goldberg‘s character until she gave in to his demands. I warn you that when these lyrics get stuck in your head for a week or two, you might want to cross over to the other side yourself. I’m pretty sure this song violates the Geneva Conventions. That said, this YouTube video made me laugh my head off, as my friend Anne Boleyn likes to say.

Okay, back to business! For those who are new here, Henry VIII had six wives and the way to keep track of them is with this mnemonic: “Divorced, beheaded, died; divorced, beheaded, survived.” Anne of Cleves, or AnneC, as I’ll call her, is Divorced #2. If you’d like to review the previous three wives, here are the old posts:

As I said in my Jane Seymour post, Jane gave Henry the male heir he always wanted in 1537. Unfortunately, Prince Edward wasn’t a particularly healthy little boy and it’s always good to have a spare. Breaking his pattern of overlapping wives, Henry waited a few years before looking for the next lucky lady but ultimately, a king’s gotta do what a king’s gotta do, and a wife had to be found. His advisers were eager to find a princess from another country, both to cement an allegiance with said country and because the families of home-grown queens tended to get all uppity.

Henry VIII action figure.
There should definitely be a line of “crazy tyrant” toys, don’t you think?

In the 16th century, people just couldn’t set up a Webcam, have sex with a stranger and share it with the world like we do now. It was a lot more difficult to figure out who was easy on the eye and fun in bed back then. Henry’s peeps did their best, sending painter Hans Holbein to do the portraits of various noble ladies. Henry’s reputation wasn’t the best at this point. Supposedly, the highly desirable 16-year-old Christina of Denmark told the English ambassador that she’d marry Henry only if she had a spare head. Oh, snap!

Christina of Denmark by Hans Holbein

Holbein also went to the Duchy of Cleves (in what is now Germany and the Netherlands) to paint our heroine, AnneC. The consensus was that she was kinda pretty. Henry had his doubts, because unlike his sophisticated and sexy second wife, AnneB, AnneC had no formal education and no interest in music, which was one of Henry’s passions. She spoke only German. But Henry’s chancellor, Thomas Cromwell, liked the politics of Cleves and its potential as an ally abroad, so he urged Henry on. He was all like, “Seriously, dude, she is hottt!” 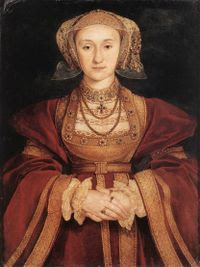 “Am I hot or not?”
AnneC by Holbein

So, the deal was done and AnneC set off for England. Henry decided to surprise her by meeting her in the town of Rochester on New Year’s Day in 1540. This was a bad idea. By this time, Henry had become the guy we all know and have a love/hate relationship with: the obese king clutching a greasy turkey leg. In his youth, however, he was quite the looker. Fair haired, tall, built, unbeatable at tennis and jousting … he was the catch of Europe. “Bluff Prince Hal,” he was called (that was a good thing). He loved masquerades and would dress up as a Turk or a robber and “invade” parties. Since he was always the tallest man in the room, he fooled no one, but the court played along. Katherine of Aragon would pretend to swoon, Henry would whip off the mask and everyone would applaud because he was so just so cute and also he would kill them if they didn’t clap. Henry still thought of himself as that dashing prince of long ago, so he expected AnneC would be thrilled when he arrived unannounced and presented himself for her adoration. He thought wrong. In her historical novel The Boleyn Inheritance, author Philippa Gregory (The Other Boleyn Girl), envisions old Henry strolling in disguised as a regular guy and planting a big kiss on AnneC who then … turns her head and spits. In the novel My Lady of Cleves, Margaret Campbell Barnes presents a more civilized encounter: their eyes meet across a crowded room and both are deeply disappointed.

Another portrait of AnneC
From tudorhistory.org

Henry, who was probably the far less attractive one of the pair, made a big deal about AnneC’s looks behind her back. He said she was pockmarked, called her a Flanders mare and said he wouldn’t marry her. Cromwell convinced him and the wedding took place on January 6, 1540. Apparently, it took place in a drive-through chapel in Vegas because the ring was barely on AnneC’s finger when Henry started planning the annulment. Among his many complaints: her saggy boobs made him impotent.

My Cleves necklace design was inspired by the name of the home of the Dukes of Cleves: Schwanenberg. In English, it is “Swan Castle.”

Now I will prove AnneC was a damn genius. After a lot of behind the scenes drama — Henry couldn’t insult Cleves by sending Anne back but didn’t want to keep her — Henry offered Anne a deal. She would get lots of money and the respect due to a top lady in the land as long as she agreed to divorce him while remaining in England as his “dear sister” and never remarrying. Anne’s response was: “WHERE DO I SIGN?” This, my friends, is smarts. If a mercurial 16th-century wife-murderer ever offers you a sweet deal like this, my advice is to take it. Sure, you can stick to your guns and lose your house and custody of your child like Katherine of Aragon. You can refuse to compromise until it’s too late and lose your head like Anne Boleyn. You can get a boob job to make him happy, have a baby and die of medical malpractice like Jane Seymour. Okay, Jane didn’t get a boob job, but the rest is true. Or you can be a happy virgin, outlive your ex by 10 years and spend all your money on gorgeous clothes, fine dining and gambling. If the right choice isn’t obvious, I really fear for your sanity.

If you’re wavering, don’t think for a second that Henry had turned into King Nice Guy. Some bad boys can’t be tamed. Remember Thomas Cromwell, the guy who was so psyched for the Cleves marriage? Henry had him executed, specifically for his role in arranging the marriage. Again, Anne of Cleves = damn genius.

Anne doesn’t have a lot of literature devoted to her, but you can read about her in any of the nonfiction books on Henry’s wives. And I’ve already thrown in mentions to two novels but here they are again:

Tune in next Thursday for another Book Club post!

You might also like
Topshop Drama Drags On; Letter Rings for Sale
A Few of My Favorite Things
Jewel of the Month: Throwback Thursday Necklace
Previous Post: « The Old In-Out In-Out*
Next Post: I Am Not a Puritan »