Welcome back to Music Hum, students! Music Hum is my sporadic series on “vintage” music. Check out my first Music Hum post here. Annie Lennox has a new album out

This post is inspired by the beauteous Annie Lennox, formerly of Eurythmics (people tend to say “The Eurythmics” but that is incorrect). Annie’s new album comes out tomorrow and it’s called Songs of Mass Destruction. Judging from the title, it will be more fun than a barrel of monkeys on Prozac and Ecstasy. It includes a track called “Sing,” which was written to raise money and awareness for HIV/AIDS in Africa. Twenty-three female singers, including Madonna, Shakira, Gladys Knight, Fergie and Celine Dion, participated on the track. I really look forward to hearing it even though I’m a little tired of We Are the World consciousness-raising. I’m so conscious of all the world’s miseries that I’m developing agoraphobia. I’m scared to leave the house because I’m sure I’m going to wreck the environment or accidentally oppress someone. Also, I expect that one day all of the corrupt dictators, warlords and oppressed peoples of Africa will finally rise as one and declare: “Leave us alone! No more music!” Or perhaps “No more bloody singing!” as the guy says in Spamalot. But good luck to Annie with her new project. Seriously. I have nothing but love for her.

Eurythmics were already on my mind because of the stylish PVC (or patent leather) coats in their Sex Crimes (1984) video, which I mentioned here. Annie Lennox and Dave Stewart were former lovers who formed the synth-pop duo called Eurythmics in 1980. They broke through in 1983 with Sweet Dreams (Are Made of This), a song with a synth bass line that even you bloggers born in 1993 might recognize. But what really pushed the song was their video, in which Annie sported menswear and cropped orange hair. The video is on iTunes; buy it today!

My favorite Eurythmics video has always been Who’s That Girl, also available on iTunes. Don’t be a cheap bitch! Support artists and buy the video. Honestly, people. Annie is trying to save Africa here. Give something back. I provided the YouTube link above just to give you a taste of the fabulousness, which includes: Dave Stewart’s white suit; a full roster of female British pop stars, including all three of Bananarama and Boy George‘s frenemy, the cross-dressing pop singer known as Marilyn; and Annie as a ’60s-style chanteuse AND a k.d. lang-esque man. Annie’s female and male personae kiss at the end. Hot! 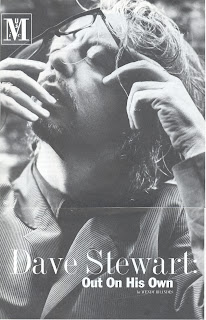 Dave and Annie had a falling out in 1990 and didn’t speak for eight years, though they’ve since reunited occasionally to record and perform live. Both have worked on solo projects, and Annie did very well with an album named Diva.

Back in 1995 or so, I interviewed Dave when he was promoting his Greetings From the Gutter album (the interview was for a free magazine called City, which existed for about a minute). I loved Dave. Often, when people become famous for a particular song/movie/winning homerun/whatever, they grow to hate talking about it. I don’t blame anyone for that; hell, I get annoyed when someone mentions what I did yesterday. (And Mom, you have to let go of whatever I did at age 13. For real.) Not Dave. He practically ran to a conference room where he could pose behind a long table like Annie in the Sweet Dreams video. Then we adjourned to the ladies’ restroom for more photos until a lady came in, stormed out in a huff and had security throw us out. Dang! If I found an ’80s pop star in the ladies’ room, I’d be thrilled! I’d be all like, “Best! Ladies! Room! Ever!” I’d email Gawker and brag to my friends! But maybe she had Crohn’s disease or a desperate need for cocaine. I try to put myself in the other person’s shoes. Dave’s team made the most of it and got an item in the New York Daily News on the Great Ladies’ Room Scandal.

Here’s my interview with the delightful and accommodating Dave Stewart. I was about to say “blame the editor” if anything seems stupid about this story, but it suddenly occurred to me that I may have been my own editor. 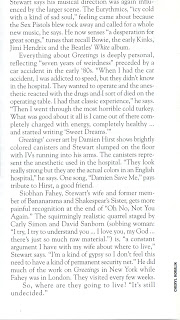 You might also like
Why Don't You Choke on a Fashion Accessory?
Come Out to Pla-a-ay!
One More G-Shock Photo: Eminem in the Air
Previous Post: « What’s New at Barneys
Next Post: Pining for Saipan »