If you happen to be in New York, the beautiful Christmas lights at Saks are worth seeing. Recently, I joined the activists of Rise and Resist to check out the light show, which includes a soundtrack. There’s nothing like hearing “Feliz Navidad” booming down 5th Avenue! Why is that song such an earworm? The thing is, I don’t even mind it. I can happily sing “Feliz Navidad” to myself all year long. Anyway, we brought along some additional decorations. 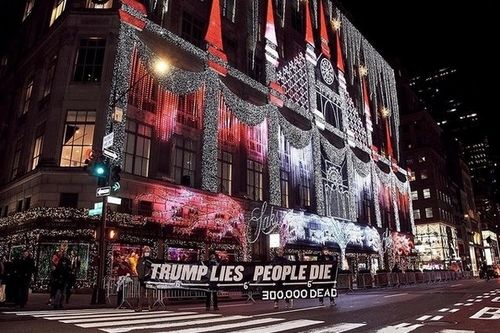 That message might seem jarring to you, but I think it’s vital to acknowledge the many who are in mourning this holiday season. Denial won’t erase the fact that more than 300,000 people died this year from COVID-19 (for comparison, it took 10 years for AIDS to kill more 100,000 people in the U.S.) and the toll wouldn’t have been that high if we’d had an intelligent, consistent public-health response. Rise and Resist also continues to fight for immigrants, including the hundreds of thousands of people who have been detained and/or deported by the U.S. Immigration and Customs Enforcement. 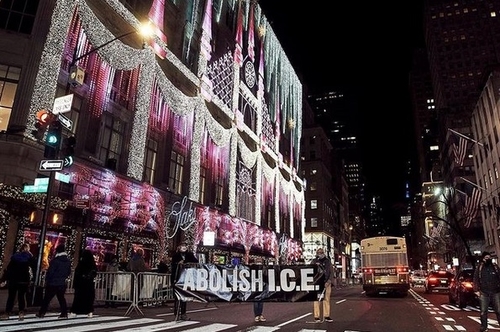 ICE is not some historic American institution — not that longevity would make it any better. It was founded in 2003 in the post-9/11 panic because of the now provably wrong idea that the bigget threat to the U.S. was terrorists from overseas. Remember how 15 of the 19 September 11 hijackers were Saudi nationals? Well, under the Trump administration, Saudi Arabia is lauded as a great customer for U.S.-made weapons. 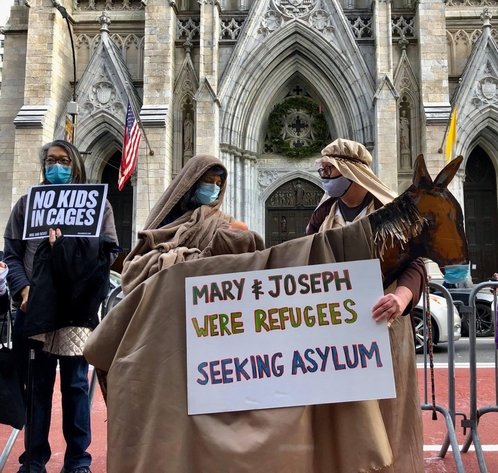 The day before the Saks event, Mary and Joseph made an appearance in front of St. Patrick’s Cathedral.

Meanwhile, ICE keeps itself busy by snatching up people who don’t actually buy bombs in mass quantities. That sometimes includes American citizens, from high school students to Marine veterans. Conditions in ICE detentions centers are horrific and COVID-19 is rampant. And this is not just a border issue. ICE is detaining people in jails all over the country, including one that’s a short bus ride away from New York City in Bergen County, N.J.. Several prisoners went on a month-long hunger strike, while protestors who showed up to support them were gassed and arrested by police. I grew up in Bergen County — in Mahwah, which isn’t so far away from the jail in the town of Hackensack — so I felt compelled to show up, in case my presence could be of any help. I was there on a quiet day, and the cops were still aggressive. For instance, I was taking a picture of the jail’s sign from across the street when this guy rolled up to try to block my view, and then yelled at us that we couldn’t take photos. 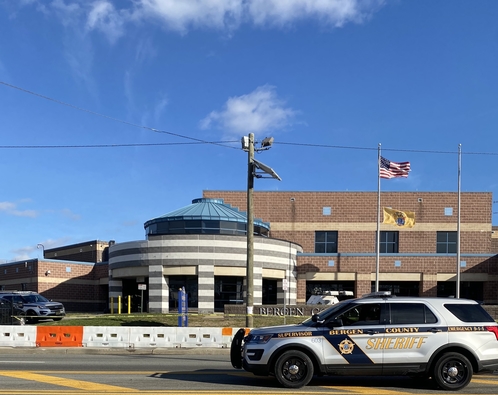 Seriously? First of all, we can take legally photos in public. Second, if you want to try to keep your horrible prison top secret, maybe don’t put it a block from the bus stop in a bedroom community that’s a 50-minute drive from Manhattan (just 30 minutes by train)? Like, there is nothing low-key about this place at all.

If you’re on Instagram, you can follow BLM Bergen County to keep up on what’s happening. And if you’re a musician or know one, spread the word about this plan for musical protests. The detainees have reported that they can hear protestors from inside, and they get a morale boost from the support.

Well, this has got to be the most dour holiday post I’ve ever written. 2020 has truly been a dumpster fire of a year.

Allow me to make amends with my traditional greeting of “Merry Titmas.”

I’d say that my best Christmas post ever was the one from 2008, except I have to walk back my criticism of my almost-husband Paul McCartney’s “Wonderful Christmastime.”

It’s no “Feliz Navidad,” of course, but a couple of years ago, I realized I’d grown fond of that song. After decades of hating it! WTF? Sir Paul either wields powerful holiday magick … or the Trump era makes practically anything well-intentioned seem spectacular.

You might also like
21 Years Ago Today: Nirvana Unplugged
Rihanna Where You At?
You Don't Have to Get Arrested. You Do Have to Act.
Previous Post: « Birthday Celebration at Wendy Brandes Jewelry
Next Post: Year in Review: What Wendy Wore in 2020, Part 1 »