John Lennon would have turned 75 today. In December, it will be 35 years since he was shot to death outside his New York City apartment building. I still vividly remember my mother telling me the news the next morning.

Today, the New York Times linked to its Nov. 9, 1980, interview of Lennon, which is worth reading.

Here’s the post I wrote on John’s 70th birthday. In it, I said, “All of this Beatles talk reminds me that I want to visit Liverpool one of these days.” I finally made that visit last year, inspired by Tune In, the first of a planned Beatles trilogy by Mark Lewisohn. Of course, I visited John’s childhood home. Click the photo of me at “Mendips” to read the original post. 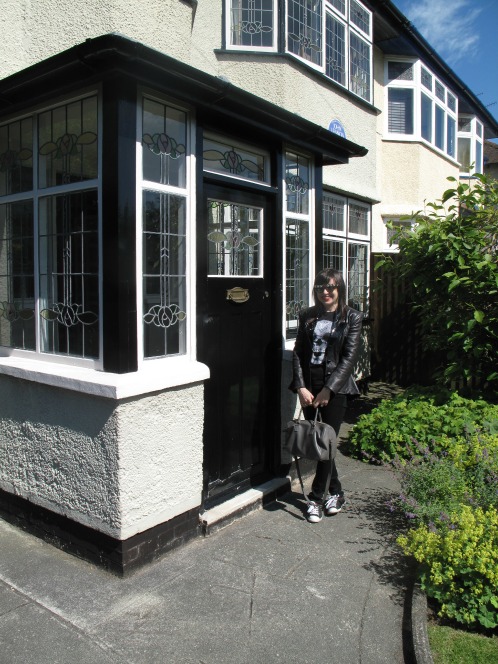 UPDATED TO ADD: Today’s Times article links to a 1976 story on John Lennon finally getting permanent resident status in the U.S. It belatedly hit me that it is HIGH!LARIOUS! that the ’76 story begins: “Yesterday, all of John Lennon’s troubles seemed so far away, and now it looks as though he’s here to stay.” The reference to the lyrics of “Yesterday” was totally inappropriate. Both John Lennon and Paul McCartney confirmed that “Yesterday” was written by Paul, not Lennon-McCartney. Beatles producer George Martin even suggested to Beatles manager Brian Epstein that the song be released as a “Paul McCartney” record (but Epstein was against doing anything that suggested the Beatles were going their separate ways). John complained he was frequently serenaded with Paul’s song. In one interview, he said:

“I sat in a restaurant in Spain and the violinist insisted on playing ‘Yesterday’ right in my ear. Then he asked me to sign the violin. I didn’t know what to say so I said ‘OK’ and I signed it, and Yoko signed it. One day he’s going to find out that Paul wrote it. But I guess he couldn’t have gone from table to table playing ‘I Am the Walrus.'”

John must have rolled his eyes over that Times story!