In 1933, the year the Great Depression reached its lowest point, Franklin Delano Roosevelt was inaugurated as president and famously told the nation “the only thing we have to fear is fear itself.” It’s worth reading more of that speech today — the 18th anniversary of the 9/11 terror attacks. Here is the whole first paragraph:

“I am certain that my fellow Americans expect that on my induction into the Presidency I will address them with a candor and a decision which the present situation of our people impel. This is preeminently the time to speak the truth, the whole truth, frankly and boldly. Nor need we shrink from honestly facing conditions in our country today. This great Nation will endure as it has endured, will revive and will prosper. So, first of all, let me assert my firm belief that the only thing we have to fear is fear itself—nameless, unreasoning, unjustified terror which paralyzes needed efforts to convert retreat into advance. In every dark hour of our national life a leadership of frankness and vigor has met with that understanding and support of the people themselves which is essential to victory. I am convinced that you will again give that support to leadership in these critical days.”

It’s remarkable how thoroughly we gave into fear after the nearly 3,000 murders that took place on September 11, 2001.   We threw ourselves headfirst into fear, so much so that we have damaged our democracy and compromised our humanity in ways that must fulfill many of Osama bin Laden’s most grandiose dreams. For instance, the war in Afghanistan — the longest war in our history — continues to this day. There have been over 1,800 U.S. military members killed in action in Afghanistan. The civilian toll there is horrendous; according to the United Nations, 4,000 civilians in Afghan were killed in the first six months of this year alone. We’ve failed at nation-building there. What was it all for? While it did make sense in October 2001 to target the ruling Taliban in Afghanistan for harboring the terrorist group al Qaeda, we didn’t finish the job. Al Qaeda simply moved to Pakistan where it functioned as usual until President Obama prioritized eliminating the organization in 2009. In the interval, President George W. Bush ordered the 2003 invasion of Iraq, citing a connection between the country and al Qaeda that simply didn’t exist. U.S. taxpayers wasted $1.7 trillion on an unnecessary military maneuver that killed at least 134,000 Iraqi civilians.

At home, fear led to the 2002 founding of the Department of Homeland Security by President Bush. These days, it’s spying on activists, journalists, and human-rights lawyers. The DHS’s U.S. Immigration and Customs Enforcement (ICE) agency was created in 2003. It’s been increasingly terrorizing entire immigrant communities, detaining individuals for weeks or months in inhumane conditions and deporting people to their deaths in countries some of them never lived in. Because of fear, we have concentration camps, not just on our southern border, but throughout the country. (Yes, they are concentration camps.) Partly because of fear (but also because of racism and misogyny), we have a president who not only expresses admiration for foreign dictators including Putin and Kim Jong Un, but encourages white supremacist domestic terrorists. Thanks to his culture of stochastic terrorism, every terrorist-caused death in the U.S. was due to homegrown, right-wing terror.

The last fact is why I keep rereading these words of Roosevelt: ” … unreasoning, unjustified terror.” We have so much terror, and so little reason and justification for the ways we try to alleviate our terror. We decimate lives abroad. We attack the wrong country. We treat people who live in our country as enemies, unless they’re actually are enemies of democracy — then we call their racism “economic anxiety” and their murderous acts “mental illness.” We keep guns because of our fear, even though the guns cause far more violent deaths — by suicide and homicide — than any terrorist act has. When we are fortunate enough to have heroes  — like the 9/11 first responders — we make them beg for our support afterwards instead of overwhelming them with our gratitude. On top of it all, we’re scared to challenge the unregulated capitalism that is destroying our livelihoods and environment, which brings me to another part of Roosevelt’s speech. In the eighth paragraph, he said:

“Recognition of the falsity of material wealth as the standard of success goes hand in hand with the abandonment of the false belief that public office and high political position are to be valued only by the standards of pride of place and personal profit; and there must be an end to a conduct in banking and in business which too often has given to a sacred trust the likeness of callous and selfish wrongdoing. Small wonder that confidence languishes, for it thrives only on honesty, on honor, on the sacredness of obligations, on faithful protection, on unselfish performance; without them it cannot live.”

When “confidence languishes,” we’ve seen that fear emerges, accompanied by feelings of jadedness, hopelessness, and passivity. It’s time to rebuild ourselves as individuals and a country with a new commitment to FDR’s list:

It’s past time for us to live bravely. 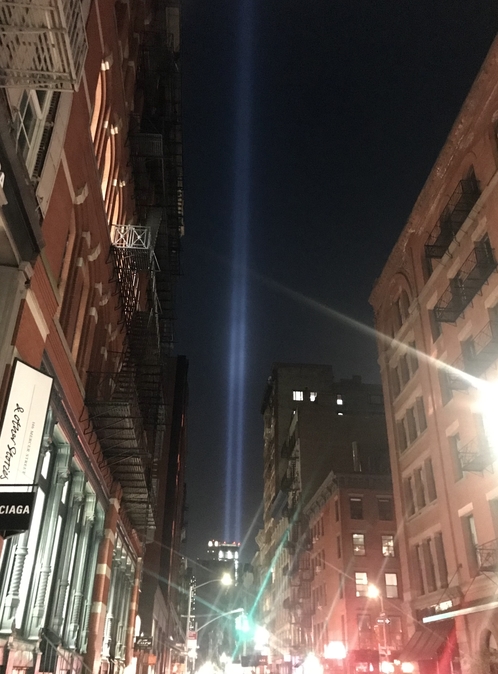 Memorial lights for the Twin Towers, seen on September 10, 2019.

UPDATED SUNDAY, SEPT. 15, 2019: The Washington Post magazine has a good article on the 18 years of war in Afghanistan, asking “Was it all worth it?” 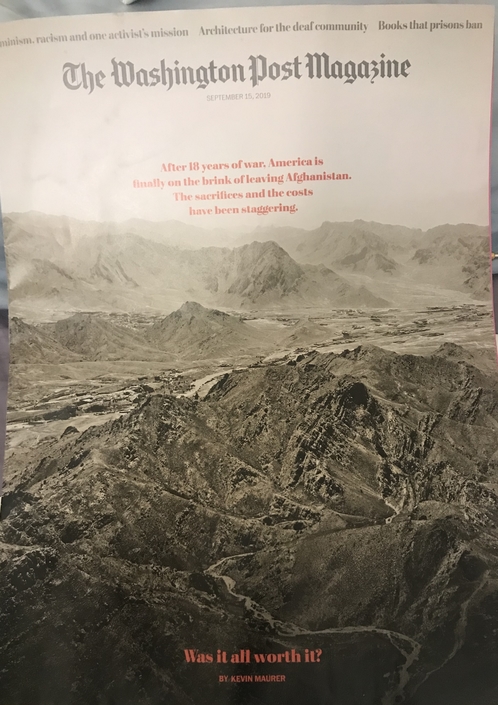 You might also like
WendyB in the New York Times
Throwback Thursday: Appropriate for Tennis
Schwarzenegger Speaks the Truth
Previous Post: « Customer of the Day: Elena From Chicago
Next Post: The Final Friday the 13th Earrings! »