I spend a lot of time on Twitter — I’m a masochist, I guess — and I keep seeing people reacting to stories like this one about the warehousing of immigrant children in overcrowded and disease-ridden detention camps on our southern border. People tweet plaintively: Why aren’t we in the streets en masse? Why aren’t we like London? Like Hong Kong? Like Prague? Like Seoul? Like Washington D.C. and all around our own country in January 2017?”

Ugh. Americans always gotta American. It’s “Pull yourself up by your bootstraps” when giving advice to everyone else, but the moment it’s our turn — collectively or individually — we look around for a hero to save us, or at least a guarantee of a million people marching so that we won’t feel lonely out there in the mean streets. Listen up! We are our own heroes and there are actions taking place all over the country. If you get out there and join one … and bring a friend … who brings a friend … who brings a friend … and so on … you’ll help create that big crowd you want to see. That’s how it works.

You could have joined me at a lunchtime protest organized by an Indivisible activist chapter called Action Potluck today. We were outside the offices of New York Senators Chuck Schumer and Kirsten Gillibrand, wrapped in silver Mylar “blankets” to symbolize the poor standard of care deliberately being inflicted on actual babies. 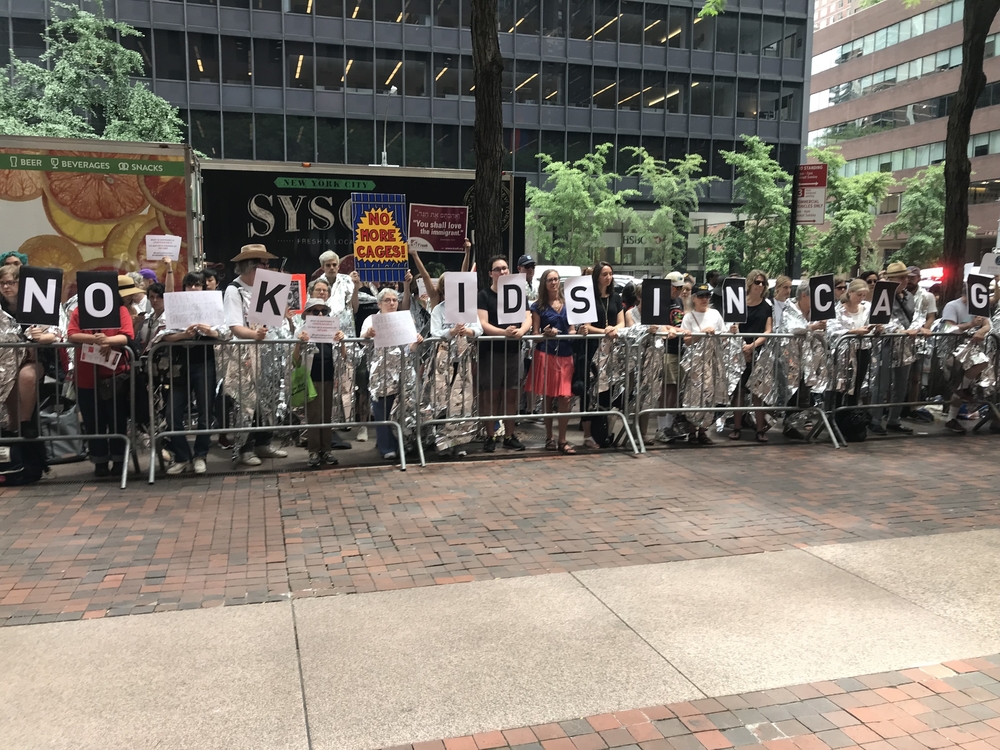 I’m peeking out over a white sign between the letters “O” and “K” on the left.

As I left the protest — which was mostly silent and graced by the presence of a Catholic priest, a Buddhist priest, and two rabbis — I shot this little video to encourage and educate you.

The main takeaway is that if you’re upset by what’s happening this country and you’re not calling your two U.S. senators and your one congressperson EVERY DAY, you ain’t serious. Stop playing! Put those phone numbers in your contacts and spend five minutes (total) telling the officials who work for you what you expect to see out of them. Can’t find time between 9 a.m. and 5 p.m. to call? Oh, I got you. Text the word RESIST to 50409 and you can use Resistbot to send messages 24/7.

I went directly to the protest from the dentist, and then went to numerous other appointments, so today was a Resistbot day for me. I used the Twitter version of Resistbot (something good has to come out of Twitter, amiright?) to tell Schumer, Gillibrand, and my congressperson, Carolyn Maloney, that I wanted to see them out there speaking out against child abuse while wrapped in silver Mylar “blankets” like the protestors. It makes a strong visual statement. 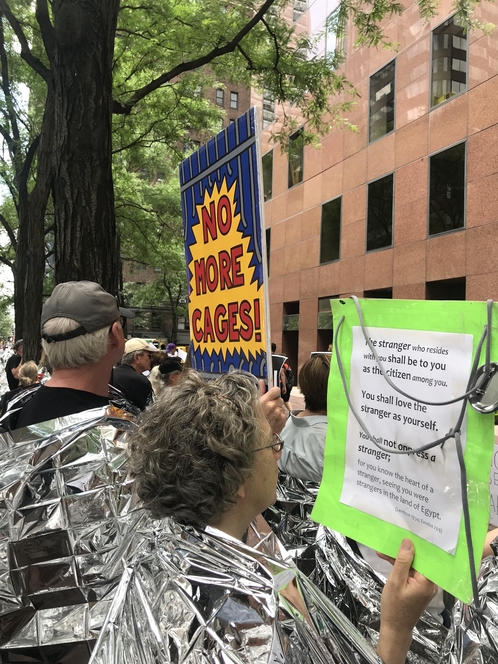 I don’t know if these things keep anyone warm but they sure are fucking noisy.

If you’re in New York City, there’s another protest this Wednesday, at noon, in Foley Square near City Hall.

Trump has terrorized us for too long! Enough is enough! NY’s ready to kick @ICEgov out!
Join us in this fight!
#ProtectEachOther #ICERaid#ICERaidNYC#HandsOffOurFamilies#DontOpenTheDoor#NeverAgain#NewSanctuaryCity pic.twitter.com/u7mGw3nuBV

I’ll be there — how about you?

If you’re not in New York City, here are some organizations that might enlighten you as to what is going on in your area.

There’s also this amazing online tool known around here as Poodle. USE IT.

Separately, getting back to my New Yorkers, Tuesday, June 25, is Election Day. I’ve said before that primaries and local elections are where your vote means the most. Don’t miss them and cry to me later that you don’t like the national candidates. Where do you think most national candidates come from? Local politics.

However, not every district has a contested election. Check your poll site here to see if you need to vote. Then go here to learn who and what is on your ballot. The most important vote that I know of is happening in Queens, where 31-year-old Tiffany Cabán — a public defender who identifies as Latinx and queer — is running for district attorney on a criminal-justice platform.

Tiffany’s (Democratic) opponent is taking big bucks from real-estate developers. And you know where real-estate developers get us. Tiffany has taken no corporate money. Small donations only. No matter where you live in the U.S., consider donating a dollar or five to her — campaigns are expensive and there are still last-minute ads to run, canvassers to support, and then bills to pay after the election. This is a huge job. Queens is the biggest borough in New York City with 2.3 million residents. Compare that to South Bend, Ind., with a population of 100,000 people, yet Mayor Pete feels empowered to run for president.

Ready to activate? I’m going to assume the answer is yes.