I’ve had an eagle eye on the attendees of tonight’s Costume Institute Gala at the Metropolitan Museum of Art.

As I wrote earlier, I wasn’t convinced that the celebrity guests were going to live up to the theme of the exhibition the Met Gala is promoting, which is “Camp: Notes on Fashion.” I’ve been pleasantly surprised — almost spoiled for choice regarding my Best Dressed/Wear What You Want award winner — considering camp can be a difficult concept to pin down, as writer/activist Susan Sontag acknowledged in her famous 1964 essay, “Notes on Camp.” She wrote, “To talk about Camp is therefore to betray it,” yet here we are with an entire museum exhibit that centers her essay. On the other hand, Sontag wrote, “Camp taste has an affinity for certain arts rather than others. Clothes, furniture, all the elements of visual décor, for instance, make up a large part of Camp,” later adding, “Camp is a woman walking around in a dress made of three million feathers.” And if you’re looking for a dress made of three million feathers, the Met Gala is a good place to find one no matter what the year’s Gala theme is.

Here are a few other statements from Sontag that I kept in mind while selecting my Best Dressed/Wear What You Want winner:

The winner of my 2019 Met Gala Best Dressed/Wear What You Want combo award nods to all of the above statements; appeals to my own predilection for trompe l’oiel and the “over-the-top“; and references Surrealism, which often reads camp to me despite Sontag’s dismissal of “the sleek fantasies of Dali” as being on the “barren edge of camp.” My honoree is constantly on my best-dressed lists because — let’s face it — what other people call “camp” is my everyday taste and I don’t need a museum gala to adore someone who has been known to wear googly eyes in her hair. Congratulations to my winner, musician/actor Janelle Monae, as well as her designer, Christian Siriano!

This Picasso-meets-Dali face dress and its accessories are perfection. The eye that forms half a bra top with feathered lashes! The clutch purse turned into a second eye! HER HAT IS WEARING OTHER HATS!

Here are two more sentences from Sontag’s “Notes on Camp”:

I think those are relevant to Monae’s artistic work, not just her special-occasion fashion sensibilities. Last year, she came out as pansexual and put out an album called Dirty Computer, of which Rolling Stone said, “The lyrics are flesh-and-blood confessions of both physical and emotional insecurity, punctuated with sexual liberation” as opposed to the extraterrestrial persona she had maintained since her first studio album, appropriately called The ArchAndroid, came out in 2010. A big step in her personal evolution, and how did she express it visually? Check out the vagina pants she wore in her “PYNK” video.

By the way, those pants are even more spectacular in person. I’ve seen Janelle live a couple of times since 2010, most recently at Coachella last month, and “PYNK” on stage was MAJOR. I didn’t get a photo of the vagina pants, though. I was too in the moment! 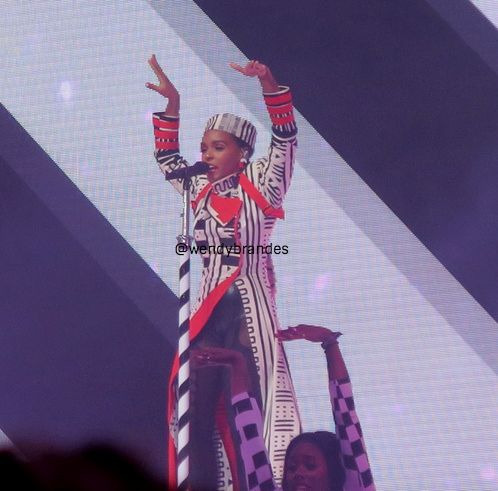 Truly, Janelle is a stellar singer/musician/dancer and if you have the chance to go to one of her shows, do not hesitate! Tell her I sent you. I mean that figuratively, by the way, because she doesn’t know who the fuck I am! Hey, maybe you can introduce us?

If you’re relatively new around here, come back tomorrow for my runners-up in the Met Gala outfit sweepstakes. If you’ve been reading my blog since 2007, I’m sure you’ve already guessed them. Just go ahead and list them in the comments, Sheila from Ephemera!

You might also like
What Wendy Wore: Amazing Belzer
What Wendy Wore: Giambattista Valli Puffy Jacket
RIP, China Machado and Franca Sozzani
Previous Post: « Met Gala 2019: Preview From Bitter, Party of One
Next Post: 2019 Met Gala: Best of the Rest »