I was on the plane on the way back from Coachella today when I glimpsed a news report on the in-flight television about the tremendous fire that broke out on the roof of Notre Dame, the Gothic cathedral that is the literal center of Paris.  I tried to convince myself that the scene wasn’t as bad as it looked, but when I got home, I saw the footage of the spire collapsing in flames and lost all hope.

However, hours later — with the fire still burning in some places but declared under control — authorities said that the main structure with its two landmark towers had been spared. France’s president, Emmanuel Macron, said the cathedral would be rebuilt, and French billionaire Francois-Henri Pinault — the head of the company that owns Gucci, Saint Laurent, and auction house Christie’s — has seized the opportunity to buy his way into heaven by pledging $100 million Euros to the cause. Reportedly, one firefighter was seriously injured, but there were no other casualties.

This better-than-expected news lifted my spirits, while reminding me of the embarrassing experience I had when I first visited Paris and Notre Dame in 1989. 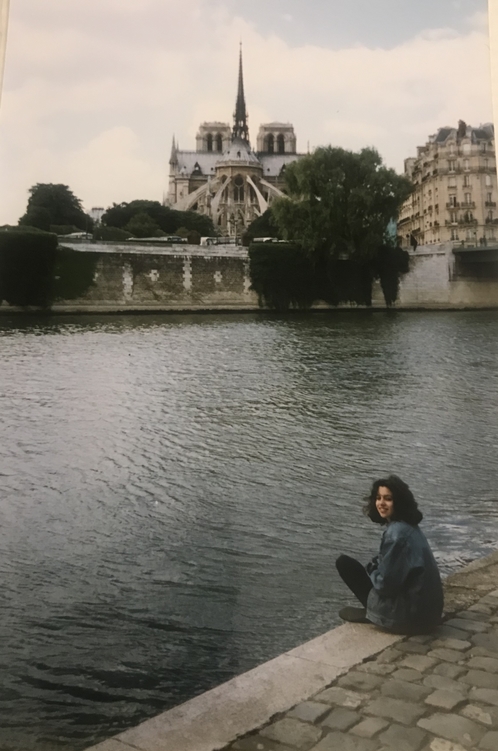 Sitting by the Seine, with Notre Dame in the background, in 1989.

I had just graduated from college and — being young, though not athletic — I climbed all the major monuments I encountered in Europe that summer, including Notre Dame’s bell tower, famous for its view of the city. 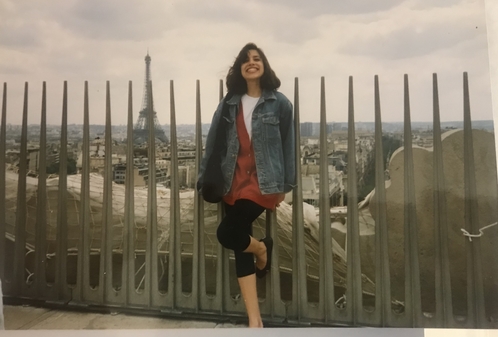 At the top of the tower. Click for more photos of me wearing this outfit.

I can’t remember the specifics of the tower tour group we were with. Did my friend and I latch onto a French-speaking tour guide because that was the only way to get access to the tower? All I know is that a large group gathered at a giant bell, and I listened to the guide give an explanation that was completely incomprehensible to me except for the final word: “Quasimodo.” With that name lingering in the air, he plucked me from the crowd, handed me a small metal rod, and said who-knows-what. Everyone else had a good laugh, while I stood there confused, until the guide took me by the wrist and helped me strike the bell with the metal rod. The sound that resulted from that little tap was LOUD AS FUCK so at least all the laughing French people were forced to run away with hands over their ears, and I was free to confide my embarrassment to an impassive gargoyle.

Nôtre Dame’s two towers have survived! And the relatively good news reminded me of an awkward experience there in 1989. It’s on the blog. #linkinbio #notredamefire #paris #gargoyle #notredame

Unfortunately, this wasn’t the first or the last time that I became a target of mischievous tour guides and/or museum guards. If you ever happen to travel with me, consider yourself warned: Second-hand mortification is a real risk.

UPDATED APRIL 17, 2019, TO ADD: It’s the battle of the beneficient billionaires! Bernard Arnault — the head of Louis Vuitton’s owner, LVMH, and Francois-Henri Pinault’s arch-rival — has pledged 200 million Euros for the restoration of Notre Dame. I’m convinced Arnault deliberately waited for Pinault to announce his pledge so that he could double it. But hold up! The race to Heaven hasn’t been won yet because the Bettencourt Meyers family, which controls L’Oreal, matched Arnault’s pledge. Pinault better up the ante or he’ll be (a) exposed as not as rich as the other billionaires and (b) forced to see all the angels wearing Louis Vuitton halos in the afterlife. Merde!

Now that the 1% of France are battling it out to see who can be the savior of Notre Dame, regular folks who want to contribute to a rebuilding effort can do a good deed elsewhere. I recommend participating in this fundraiser for three historically black churches in one Louisiana parish that “coincidentally” all burned down in a two-week period.