I normally wouldn’t describe a 5 a.m. to 10 p.m. workday as a fabulous experience, but my first time working at my local poll site on Election Day qualified. Voter turnout was the highest any of the experienced Election Day workers had seen outside of a presidential election.

It was hot and crowded and a lot of our scanners went down, but people were patient. Quite a few folks told me they were voting for the first time in decades. Some of those wound up submitting the kind of affidavit ballots I spoke about in yesterday’s post. The large number of affidavit ballots I saw inspired me to ask one of the poll-site veterans how many of those she typically handled. “Zero,” she said.

We ran out of “I Voted” stickers long before the evening rush. Earlier, I’d gone home during my break and photographed the pets with my sticker … 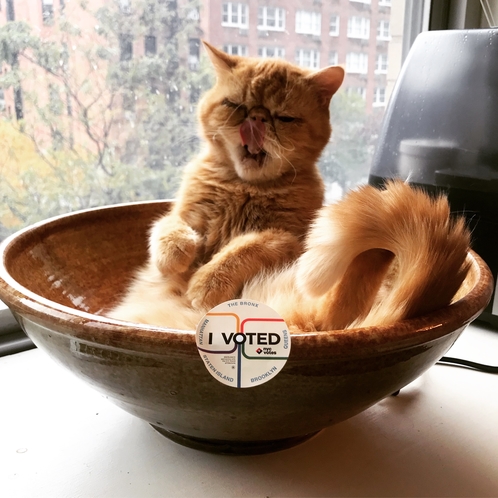 FitzRoy the cat, his bowl, and the sticker.

… so when a woman came through in the evening with a cute four-month-old baby strapped to her, I gave my own sticker to one of our youngest “voters” of the day so his mom could take a picture of his early civic involvement for posterity.

I wish I could hang out with the other poll-site workers all the time. I assisted 86-year-old Lorraine (“Lorraine” as in “sweet,” she said), who — between checking voters in — talked about being a Freedom Rider in 1961 and had me all choked up when she told me how she felt about seeing a president encourage white supremacists and Nazis.  Meanwhile, 80-year-old Rita STOOD the entire day at the scanners, helping voters submit their unwieldy, two-page paper ballots. At the end of the night, everyone asked if I would be back or if I was scared off, and I said I’d definitely be back.

Of course, I’m excited that Democrats flipped the House AND the New York State senate. The latter was especially on my mind because New York desperately needs voting reform, including early voting, no-excuse absentee voting, and automatic registration, but the Republicans in the Senate have been rejecting that kind of legislation for years. Now we can get it! I was also happy with results for the local Congressional candidates that my Indivisible chapter campaigned for.

New York Magazine has a good list of important victories here, as well as an article on the seven new Democratic governors here.

How was your voting experience? Tell me in the comments.

You might also like
eBay Pick of the Day: Ossie Clark Sweater
Stylish Hillary Clinton, Moving at the Speed of Light
What Is "Stochastic Terrorism"?
Previous Post: « Election-Day Video, Links, and Liuba
Next Post: The Week in Review, Plus NYC Jewelry Week »