The failed businessman currently occupying the White House is back to attacking women this week. In a move worthy of a George Orwell novel, he announced an abortion-related gag rule for health clinics that he says isn’t really a gag rule because he says it’s not a gag rule.

The rule applies to clinics that receive grants under Title X, the 1970 federal statute that provides affordable birth control and reproductive health care to people with low incomes. It says (see page 119): 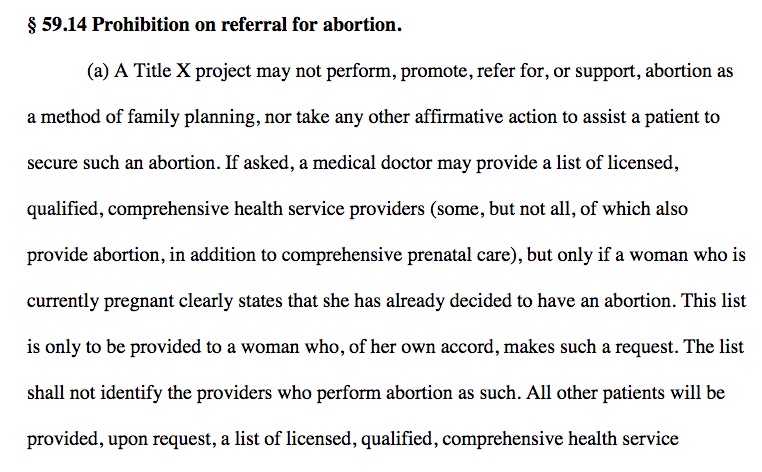 Let’s review! According to this rule, doctors at Title X clinics not only cannot perform abortions themselves, but they cannot even refer a woman elsewhere unless the woman demands such a referral. Then, they can give the woman a list of possible providers — except the list includes some places that do abortions and some that don’t and the patient has to figure out for herself which is which. That’s not as easy as you might think, considering that there are politically motivated clinics masquerading as regular medical centers. Imagine if a cardiologist wasn’t allowed to mention bypass surgery (or stents or baby aspirin or whatever) unless the patient said, “I have decided I want surgery”? And then the guessing game begins!

Now that I think of it, Trump is right for once: This isn’t a gag rule. It’s beyond that. It’s a blatant attempt to control women’s lives by interfering with the private communications taking place in a confidential doctor-patient relationship. This is why we have to get out there and RESIST for our lives, like the people who rallied outside New York City’s City Hall today.

This shit should get you fired up. I’m not here for the sulkers who complain that any rally smaller than the 2017 Women’s March isn’t worth going to. News flash: They’re all going to be smaller because the Women’s March was probably the single largest one-day demonstration in U.S. history! Get off your couch and you’ll see how many allies there are. Bring a friend, or a family member, or a neighbor, or your mayor … and the crowd will be that much bigger.

As historian Timothy Snyder writes in his book, On Tyranny: Twenty Lessons from the Twentieth Century, “Anticipatory obedience is a political tragedy,” so don’t give up without a fight. Instead, he says, “Practice corporeal politics. Power wants your body softening in your chair and your emotions dissipating on the screen. Get outside. Put your body in unfamiliar places with unfamiliar people. Make new friends and march with them.”

Not sure what to do? You can start by texting “STAND” to 22422 to join the Planned Parenthood Action Fund mobile list and get updates on how you can join the fight to protect our health, our rights, and our communities. You should also make it a point to text your senators, congresspeople, and governors regularly via one of my favorite tools, Resistbot. Just text “RESIST” to 50409 and the bot walks you through the rest. It takes about two minutes or even less, and you can yell at your senator after a night of drinking like I do.

If you live or work in New York City, go to the website of my neighborhood Indivisible chapter’s website and sign up as a member — even if you’re not on the Upper East Side — because I send out a weekly newsletter of actions to take. Today’s Planned Parenthood rally was listed there, for instance, and that was downtown.

Not in New York? Indivisible is a grass-roots progressive movement with thousands of chapters across the nation. I think there’s over 600 chapters in New York State alone. Find a local group here. Oh yeah — and every time you do one of these things, get a friend to do it too. A big part of being effective is communicating the possibilities. You won’t know who has or hasn’t heard of Resistbot or Indivisible until you ask! Buy an extra copy of On Tyranny and give it away! Share the passages about patriotism versus nationalism, including:

“The president is a nationalist, which is not at all the same thing as a patriot. A nationalist encourages us to be our worst, and then tells us that we are the best. … A patriot, by contrast, wants the nation to live up to its ideals, which means asking us to be our best selves. … A nationalist will say that ‘it can’t happen here,’ which is the first step toward disaster. A patriot says that it could happen here, but that we will stop it.”

UPDATED MAY 25, 2018, TO ADD: This article includes quotes from the speakers at the rally yesterday.

You might also like
#CloseTheCamps: Take to the Streets on July 2
Protestors Turned Up, Chuck Schumer Did Not
Three Easy Ways to Take Action on Gun Control
Previous Post: « Wednesday’s Video: Hatshepsut Locket in Action
Next Post: What Wendy Wore: Abigail & Max Got Married »