To celebrate tonight’s Academy Awards — and console myself for not being there this year — I’m reminiscing about my personal Oscar fashion archive. Picking up where I left off in Part I, Part II begins in 2006. Beauty-wise, I skipped the faux-ny tail again and, thankfully, opted for straight hair. 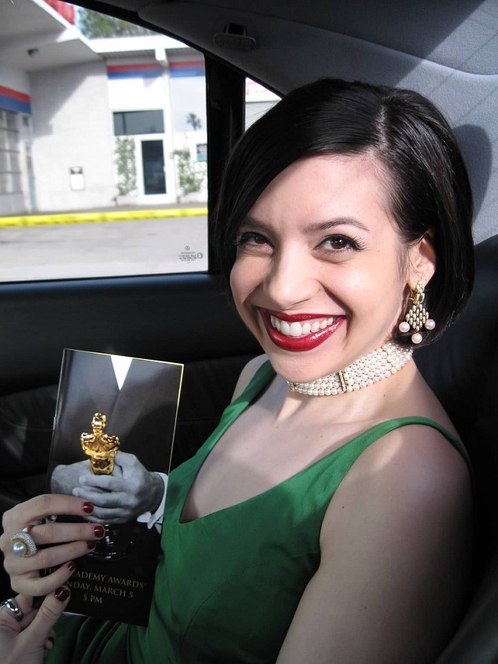 I had enough going on with my beaded, peacock feather fan! 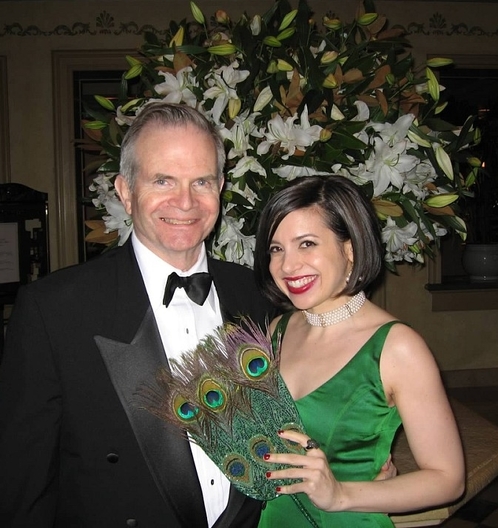 I had admired an emerald-green gown by designer Zang Toi that was created for the runway with a extravagant train adorned with peacock feathers and a beaded peacock pattern. I knew I couldn’t manage that in real life, so Zang made me the green gown without the wild train, and transferred the train’s theme to the fan.

This was one of my favorite Oscar looks … 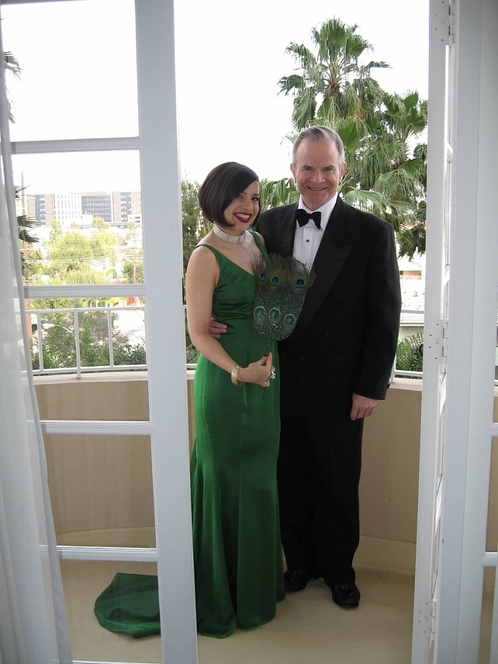 … even before the bright green helped me spot myself in the background of George Clooney’s red-carpet photos! You can see I was trying to hide my roving eyes behind that fan, but not succeeding too well. 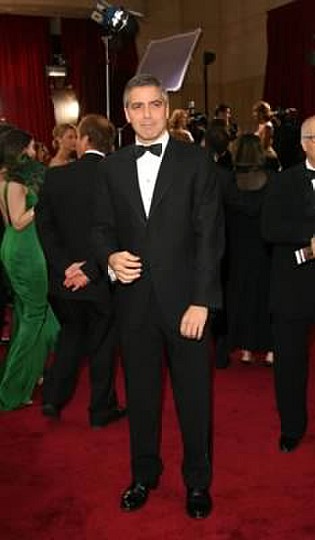 Hey, at least I didn’t act like this guy to the right of George.

The 2007 Oscars were also great for me style-wise. The faux-ny tail was back, along with the pearl earrings you can see me wearing year after year. 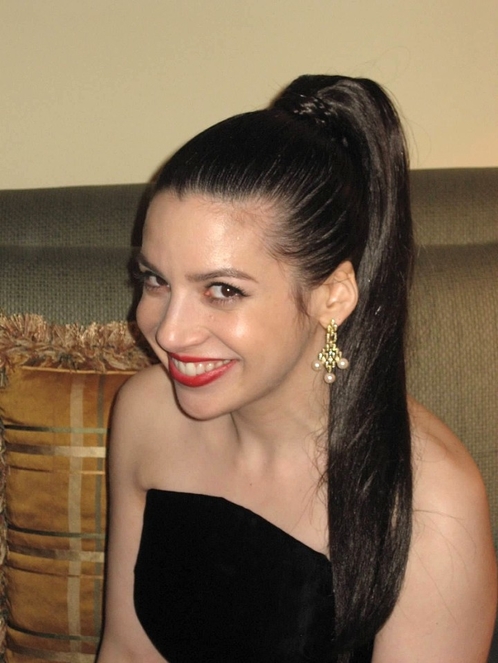 I loved my Guy Laroche dress from the vintage store Decades in Los Angeles, even though it wasn’t my first choice for the evening. 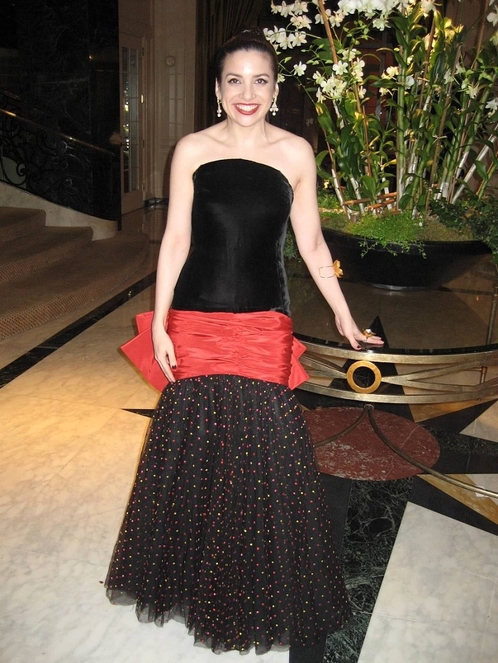 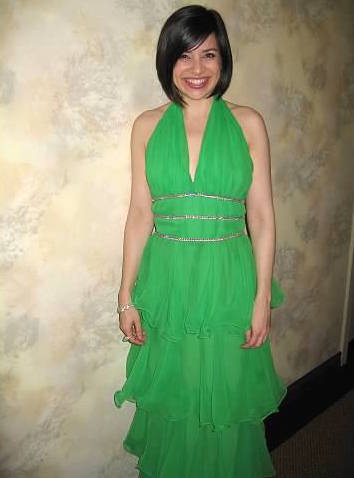 … only to discover that gorgeous actress Gina Gershon had borrowed the dress and worn it to an event in 2005.

You do not want to get in a “Who Wore It Best” contest with Gina Gershon on a big night — or probably any night — so I went with the Laroche instead. It all worked out well because I started my blog in the summer of 2007, and, thanks to the Laroche, if I ever ran out of blogging ideas, I could always fall back on butt bows. 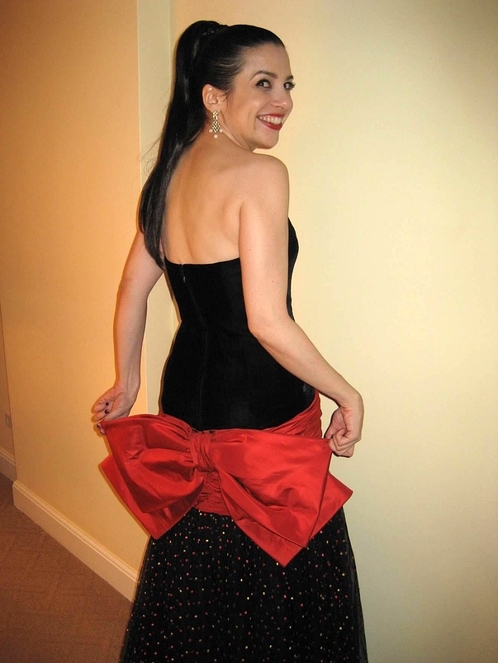 As a bonus, I bumped into Gina Gershon at some point and told her that we shared a dress, and we had a brief but fun chat about that. Like I said in yesterday’s post in reference to Renee Zellweger, all of the actresses MrB and I have met at parties — minus one — have been very sweet to us, unlike their male counterparts. I’ve always thought that’s because women are raised to be people-pleasers, plus, if a woman dares to be generally unapproachable, she’s likely to be labeled a bitch. That said, I still appreciate the little friendly moments.

I was surprised to find no Oscar photos from 2008. Based on that fact and this 2008 Oscar post, it looks like that was one of the years our invitation got lost in the mail. What is more disturbing is that I have relatively few photos from any point in 2008. What’s that about? Are they lost somewhere? Did I download them? Or did I really not take very many in this apparently pre-smartphone year? I have to investigate this further.

I was back at the Vanity Fair Oscar party in a big way in 2009. You can see from this photo how thrilled I am with my “ass flowers” dress by Zang Toi. The only way to top a butt bow is with ass flowers! 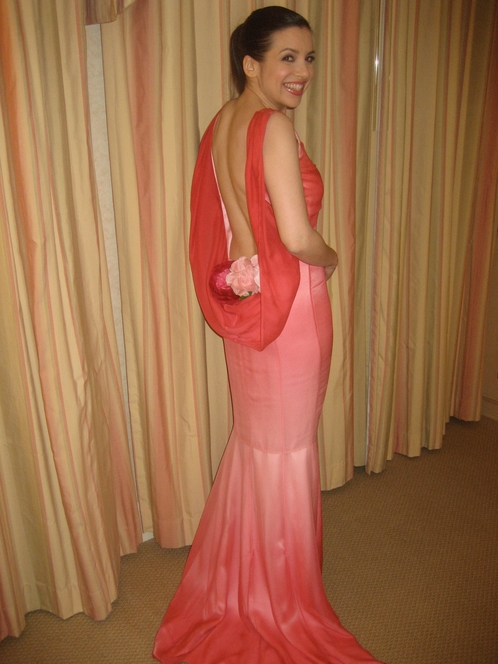 I do love an extremely backless dress. And a faux-ny tail. 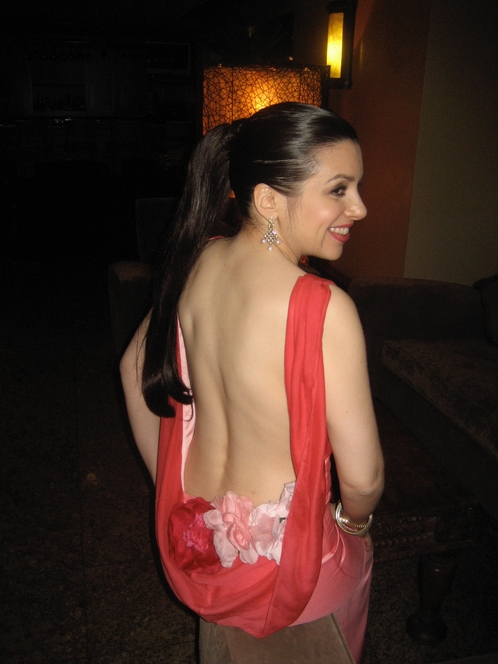 This was the first Oscars for which I made a big effort to keep track of which celebrities we’d seen for the sake of the blog. Unfortunately those included the now-disgraced Harvey Weinstein and Russell Simmons. It occurs to me that this must have been the night that MrB started hating Simmons after the latter nearly knocked him over when MrB offered a polite handshake. Like I’ve been saying, I’ve found quite a number of famous men to be rude in person. Little did we know then how much worse Russell’s private behavior was. That makes me wonder about the personal actions of some of the other nasty male celebrities we’ve met. Hmmm. We have met a few good men from the celeb world. One of the nicest was … Mick Jagger. A guy who is more famous than most of these other douchebags put together was happy to have a little chat about designer Ossie Clark. Go figure.

Stay tuned for Part III of my personal Oscar fashion archives! Of course, I’ll also be live-tweeting the Academy Awards tonight and choosing the winner of my Best Dressed/Wear What You Want award.