As I mentioned in this post, I spent New Year’s in Reykjavik, Iceland, with friends. I normally celebrate my birthday with family on the actual day (December 23) and then have a combined New Year’s Eve/birthday celebration with friends. However, this year — as you may recall — was a big birthday.

I started contemplating a destination celebration a year ago. I’ve wanted to go to Iceland for a long time, and the idea of going in the winter intrigued me. Ten years ago I was in Scandinavia in the summer so I’ve experienced the midnight sun; since then, I’ve been wondering how it would feel if there were barely any sun at all. I decided to find out and I convinced MrB; three of my New Year’s Eve regulars; and friends from Greece to join me. (I invited the the rest of my usual New Year’s Eve crowd out dancing on December 23.)

Here’s the Iceland group with our fantastic tour guide, Svavar, from Arctic Adventures. 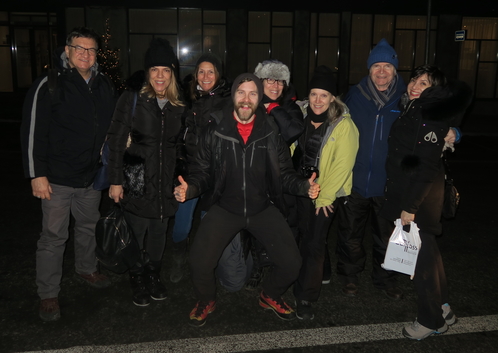 From left: Petros and Anastasia (all the way from Greece!); Alyssa; Svavar; Stacy; Tina; MrB and me.

We didn’t get to see the Northern Lights due to weather and a crazy-bright moon, but I still enjoyed the 10:30 a.m. sunrise and 4:30 p.m. sunset. Bustling around for hours before the sun came made me feel like I’d gotten up exceptionally early. I felt so industrious, and on vacation no less!

Some people who saw my bundled-up photos on Instagram exclaimed over how cold Iceland looked.

Most of the time it was in the 20s Fahrenheit, the same as New York City, but on New Year’s Eve, New York was colder than Reykjavik! That said, in New York, I wouldn’t be walking around for hours in 20-degree weather, so I was like …

This outfit took me from a windy, black-sand beach to a hike on a glacier. 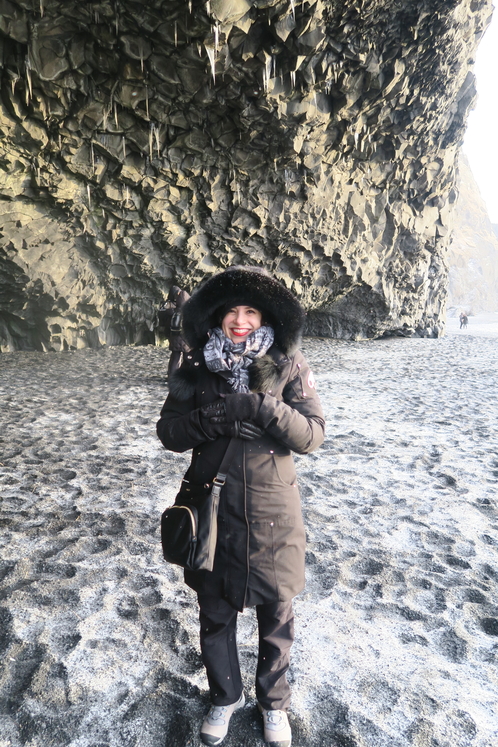 You might also like
WendyB Called; She Wants Her Look Back
Year in Review: What Wendy Wore in 2019
What Wendy Wore: End of Summer Dressing
Previous Post: « Wednesday’s Video: ANZA PURE x Wendy Brandes
Next Post: My Best Dressed at the 2018 Golden Globes Is … »