Amazon Studios announced its acquisition about a biopic about comedy icon Lucille Ball, and the news could hardly have come at a more appropriate time, considering yesterday marked the 106th anniversary of the I Love Lucy star’s birth.

Maybe the timing was coincidence, or maybe it had something to do with the fact that Lucie Arnaz and Desi Arnaz Jr. — Lucy’s children with her husband/co-star Desi Arnaz — are involved in the production. It would be a nice touch to share this step forward on Mom’s birthday, especially because the project was first announced two years ago. The script is by Aaron Sorkin, and it will be interesting to see how Cate Blanchett plays Lucy. (I know, it’s hard to believe Debra Messing didn’t get the job.)

Lucy was already on my mind because her name was trending on Twitter yesterday in honor of her birthday. I was glad to have an excuse to re-watch I Love Lucy gems. There are whole episodes on YouTube, which I got sucked into a few months ago. Or, if you didn’t grow up watching I Love Lucy reruns every day like I did, you can dip a toe in by checking out a few of the most highlarious scenes, including the chocolate factory conveyor belt; the Italian wine-making grape fight; Vitameatavegamin; Lucy’s mirror routine with Harpo Marx; and the time she and her BFF Ethel (Vivian Vance) added too much yeast to the bread Lucy was baking. And speaking of kitchen mishaps, the chocolate-factory episode also has husbands Ricky (Desi) and Fred (William Frawley) trying — and failing — to tackle domestic chores.

Then there was the time Lucy dressed as a wicked city woman and “vamped” Tennessee Ernie Ford. 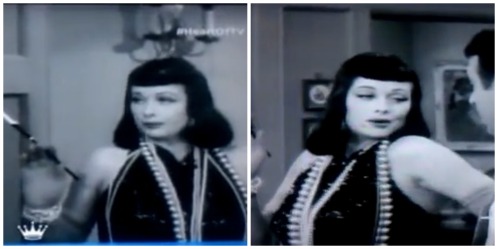 The “burlap couture” story set in Paris is a spot-on illustration of my “Never Is the Next New Thing™” observation about fashion trends. Stick with the clip till the end.

My sister’s favorite scene was from the “Lucy Raises Chickens” episode, when Lucy imitated a hen in order to round up the 500 baby chicks that were loose in her country house after an egg-selling business scheme went awry. 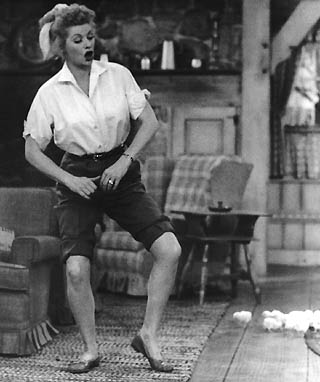 That episode originally aired in 1957, during I Love Lucy‘s final season. The show was only on the air about 5 1/2 years in all, but 20 years after the final episode, we kids were watching it so regularly and Lucy had such a hold on us that I have more vivid childhood memories of I Love Lucy than I do of many of the first-run shows of the time.

Back then, I had no idea what a badass Lucy was in real life. She didn’t become a showbiz success until she was 40, making her a very late bloomer for Hollywood. (Desi was nearly six years younger than her. Her second husband was 13 years younger than her.) After Lucy finally hit the big time, she kept control of her career by becoming the first woman to head a production company — Desilu. In that role, in the 1960s, she insisted on financing another show over the objections of her board of directors. That show was Star Trek. 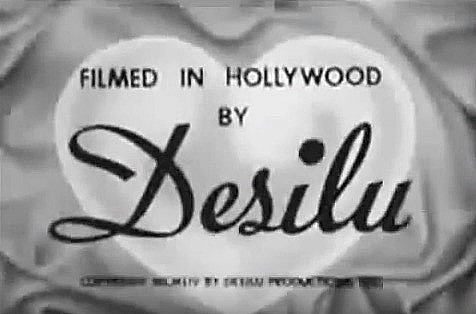 For her own show, she had enough star power to produce a seven-episode story line that incorporated her real-life pregnancy, even though the word “pregnancy” was taboo on television. (She was “expecting” or “enceinte.”) The episode where she gave birth was watched by 44 million people, according to Biography.

Despite that, the characters of “Lucy” and “Ricky” never did escape the twin beds of their on-set bedroom. Supposedly, the beds were at least pushed together until the pregnancy, but afterwards the beds were separated because the presence of a baby would be making viewers too aware of sex already. Even as a child, I knew that was silly!

Lucille Ball died aged 77 in 1989 of an abdominal aortic aneurysm, but she lives on in classic television episodes … and in a recently improved bronze statue on display in the Lucille Ball Memorial Park in Celoron, N.Y. (Seriously, you’ve got to see the original statue.)

Check out my posts about two other groundbreaking, funny ladies, both of whom were influenced, inspired and advised by Lucille Ball: