I’m so excited to share this news! The two-finger ring I did as a collaboration with ANZA Gems won first place in the colored-stone category in the InDesign Awards. 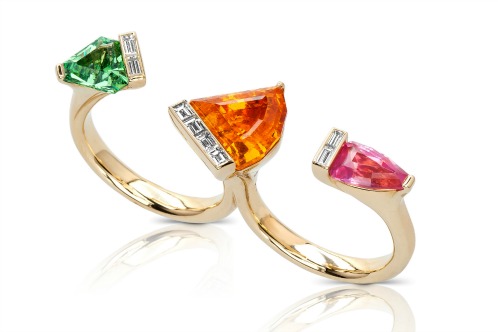 The winners were informed of the results a couple of weeks ago, but we had to keep it on the down-low until the official announcement was made.  Luckily, designing engagement rings for unsuspecting wimmins has made me good at keeping secrets.

It was a special pleasure to find out that the news had gone live from this lovely post by jewelry expert Peggy Jo Donahue.

In the category of "it couldn't have happened to a nicer (or more talented) group of people," here are the winners of the INDESIGN Awards in the colored gemstone jewelry category. This is special on so many levels, not the least of which is because the late Cindy Edelstein helped INDESIGN build the competition. So remember this, gifted women, you have a guardian angel looking over your shoulder. Not that any of you needed it. These designs are sublime! 1ST PLACE – @wendybrandes One-of-a-kind, two-finger ring in 18K yellow gold with 1.55-carat mint-green grossular garnet from Tanzania, 5.50-carat spessartite garnet from Tanzania, 1.27-carat Mahenge spinel from Tanzania and eight diamond baguettes (0.47 TCW). The ring was produced in collaboration with @anzagems founded by Monica Stephenson of @idazzle who personally sourced the rough in Tanzania and Kenya then brought it back to the U.S. to be cut. Ten percent of the profits from sales of the finished jewel go back to schools in Africa. 2ND PLACE – @margeryhirschey 22K gold earrings with emerald (14.75 TCW) 3RD PLACE -Martha Seely of @mseelydesign Ceres Spiral earrings from the Inspiro collection featuring aquamarine "planets" surrounded with double rings of 14K yellow gold, each pavé set with 70 diamonds Click link in bio to see article at @instoremagazine

As Peggy mentions, ANZA Gems was founded by my jewelry blogger friend Monica Stephenson to ethically source colored gemstone rough from Kenya and Tanzania. I’ve written before about how the backstory of these gems inspired the ring design, but you can read a fresh version of that in my interview on the InDesign site. The feature includes comments on the design from the jewelry judges.

This has been a mind-blowing couple of days here. Yesterday, my right-hand woman Eryn and I were jumping up and down over the online version of a New York Times article that I was quoted in. We got excited all over again this morning when we picked up a print copy. (I’m totally in favor of online news, but there’s nothing like seeing your name in the print edition.) The article by Rachel Garrahan is in a special jewelry section published in the international edition of New York Times. 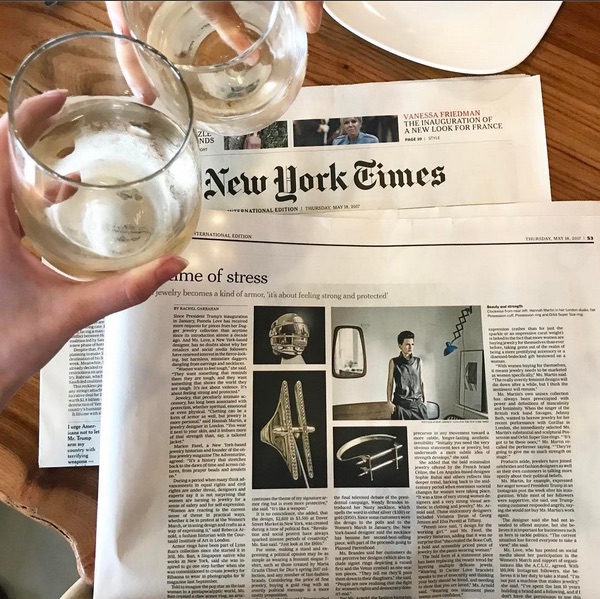 Eryn and I celebrated with lunchtime Pinot Grigio.

In addition to Rachel’s article about women wearing jewelry as psychological armor, I highly recommend Victoria Gomelsky’s story about fine jewelry on the red carpet. There have been other articles about how much big jewelry companies pay celebrities to wear their jewelry, but it’s worth reading this one because of the perspective of Gomelsky’s four interviewees, all red-carpet jewelry veterans: Greg Kwiat of Fred Leighton, Colby Shergalis of Forevermark, and designers Monique Péan and Martin Katz.

Katz, who has 25 years of experience dressing celebrities, wasn’t afraid to GO THERE. He criticized the aesthetics of the huge diamond earrings by Chopard that Charlize Theron wore to this years Oscars: “When some of these houses are all about the shock value of jewels so big, it’s really not that pretty.” Of paid appearances in general, he said: “It’s cold today. Most of the celebrities don’t even know who they’re wearing.”

When Gomelsky said she’d “read about payments that have reached $1 million,” it doesn’t appear that any of the four experts denied the possibility. I’m mentioning this because so many people ask me and Eryn: “Can’t you just get your jewelry on [INSERT NAME OF A+ CELEB].” It’s the word “just” that makes us laugh because it makes the process sound easy, like we “just” have to pick up the phone and call Charlize before the Oscars come around. Now Gomelsky has given me an idea for a good reply: “‘Just’ give us a check for a million dollars and we’ll buy our own celebrity!” Oh … who am I kidding? If anyone wants to hand over a million dollars, I’ll use it to create a whole new line and fund a couple of non-jewelry projects we’re working on. (“Just” holla at me if you need my PayPal address!). The celebs will have to stick to Chopard.

Seriously, though, thanks again to the InDesign judges; InStore Magazine, which is the sponsor of the InDesign Awards; and Rachel, for the recognition. I’m truly honored. And I’ve said this before, but I’ll say it again: Thanks to Monica for letting me take her three most outstanding gems from ANZA and put them all in one ring. That was a leap of faith!

You might also like
Shontelle Shows Two Clemence Rings Are Even Better Than One
I'm Uberchic!
Wednesday's Video: Wendy Brandes Platinum
Previous Post: « Wendy Brandes Jewelry in the New York Times
Next Post: What Wendy Wore: Prada Lip Dress From 2012 »