If you’ve been following me for a while, this necklace should be no surprise. 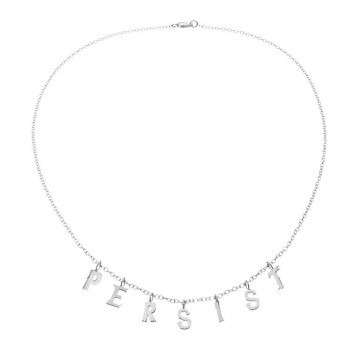 “She was warned. She was given an explanation. Nevertheless, she persisted.”

I instantly knew “PERSIST” needed to be a necklace. It fits in with my BOSSY, BOSS, PUSHY, and NASTY necklaces — all inspired by words that have been used to try to silence women and that women have reclaimed with pride.

In case you weren’t following yesterday’s developments, they came straight out of Catch-22. As the New York Times reported:

“As Mr. McConnell explained it, Ms. Warren had run afoul of Rule XIX, which forbids demeaning another senator, as she began reading a 1986 letter from Coretta Scott King on the day before the vote on Mr. Sessions’s nomination. The King letter criticized the civil rights record of Mr. Sessions, Republican of Alabama, when he was up for a federal judgeship.”

So … basically anyone who is already a senator can’t be properly vetted because any criticism is considered demeaning? WTF.

The PERSIST necklaces will ship in two to four weeks, but you can order yours now. Thirty-five dollars of the purchase price will be donated to the National Women’s Law Center in your name.