As I was writing about Mary Tyler Moore last night, I kept thinking, “Hers wasn’t the only important show about a single working woman living alone in a big city.”  But there was so much to say about Moore that I decided I’d write about Marlo Thomas another day. Procrastination in moderation once again worked out fantastically for me, because I got the New York Times today and there was Thomas herself on the front page of the Thursday Styles section. 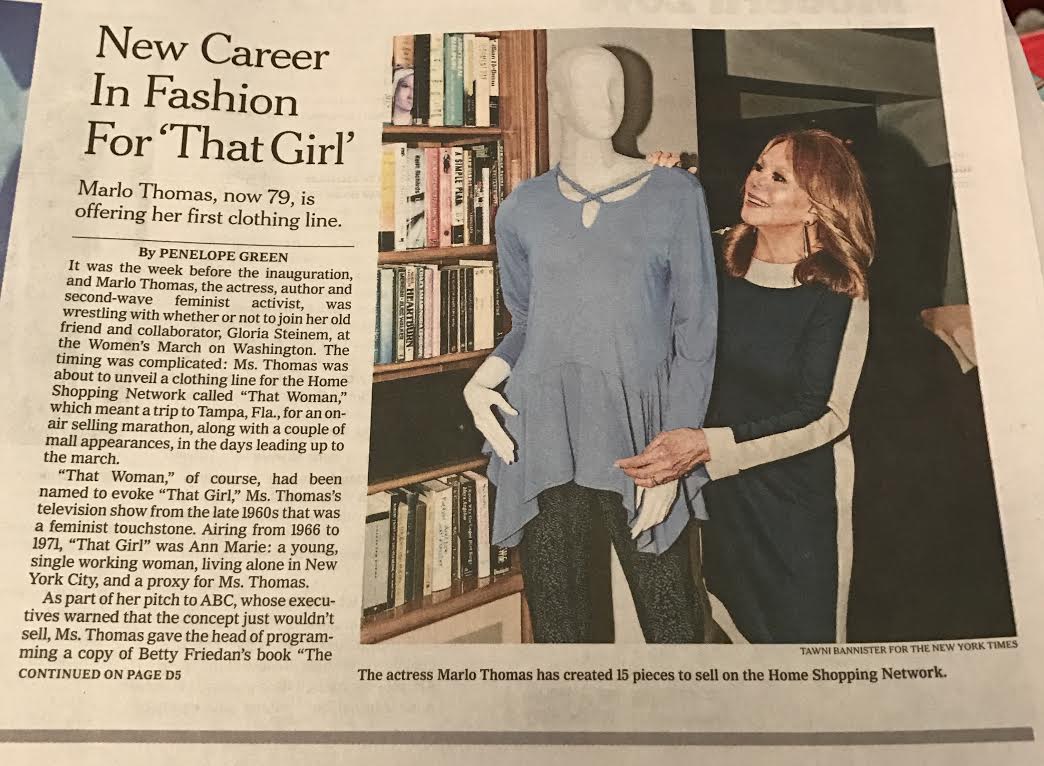 The story by Penelope Green is pegged to the debut of Thomas’s first clothing line, called “That Woman” — a riff on the name of Thomas’s career-making, slyly feminist sitcom, That Girl. (The clothes will be sold on the Home Shopping Network.) That Girl aired from 1966 to 1971 — starting the year The Dick Van Dyke Show ended and overlapping The Mary Tyler Moore Show by one year. Reruns aired all through the ’70s, so I became familiar with mod designers such as Mary Quant and Andre Courreges, despite my relative lack of interest in fashion at that time. Like Mary Tyler Moore on The Dick Van Dyke show, Thomas refused to be clad in in traditional “housewife” looks.

In fact, I watched that show so often that I could sing you the theme song from memory. I don’t have to though, because Family Guy did it better.

The Times’s account of Thomas’s pitch for That Girl reminded me of the issues faced by Mary Tyler Moore when she pitched her own show:

“As part of her pitch to ABC, whose executives warned that the concept just wouldn’t sell, Ms. Thomas gave the head of programming a copy of Betty Friedan’s book The Feminine Mystique. When those same network executives pushed for the series to conclude with Ann and her boyfriend, Donald, a magazine writer played by Ted Bessell, getting married, Ms. Thomas pushed back. Their engagement during the fifth and final season was the compromise, though the last episode found them stuck on an elevator, arguing about who had the most power in the relationship.”

To understand the culture that That Girl aired in, the Times points out that when the show premiered, only married couples legally had the right to use the birth control pill. In 26 states, single women weren’t permitted to use it. A year after the series concluded, court finally legalized birth control for all, regardless of marital status.

I recommend reading the whole New York Times article for background on Thomas’s long history of activism. Younger people might be most familiar with Thomas for her promotion of the St. Jude Children’s Research Hospital, the free pediatric cancer research and treatment center founded by Thomas’s father, the comedian Danny Thomas. But Thomas has done so much more. For instance, in 1973, along with Gloria Steinem, Letty Cottin Pogrebin, and Patricia Carbine, Thomas was a co-founder of the nonprofit Ms. Foundation for Women. (As the foundation website says, “The mission of the Ms. Foundation for Women is to build women’s collective power to realize a nation of justice for all.”)

In addition, Thomas conceived, created, and executive-produced the 1972 children’s album Free to Be … You and Me, which was a massive hit with its songs and stories encouraging individuality and acceptance. Proceeds went to the Ms. Foundation. 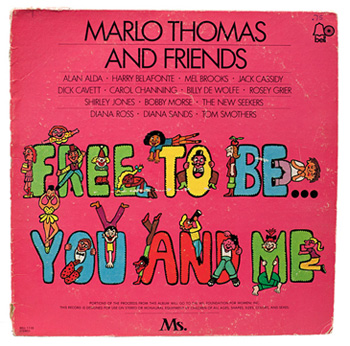 A book and a TV special followed.

For the project’s 40th anniversary in 2012, Dan Kois wrote for Slate about how the album “aimed to teach kids that boys and girls aren’t different at all: that every child, no matter which gender, can wear whatever, like whatever, behave however it wants.” He said:

Hmmm. These days I would say that even a prissy princess deserves to live her best life, but overall the message was radical and important and encouraging. We could use a lot more of this for kids (and adults) now. As for people who complain that celebrities shouldn’t speak about social or political causes, this is a reminder that such behavior nothing new. If a fascist reality-television star can become president, being another kind of entertainer shouldn’t preclude anyone from speaking his or her mind about said fascist.

Anyway, as for why Thomas, now 79, is launching her first commercial project at this time, her answer can be summed up as … why not? “But my way,” she said, “so I’m in control of everything.”

Cute aside: Thomas has been married to talk-show host Phil Donahue for 36 years. They fell for each other on the air in 1977 when she was a guest on his show. Thanks to the Times for linking to Thomas’s short, adorable clip from that day, though I would have loved to see the whole conversation.