The Unicode Consortium — aka Emoji Headquarters — is killing it lately! The consortium used to approve new emojis at such a glacial pace that I started designing my own emoji-like jewelry right along with pieces representing actual emoji. For instance, I created an emoji-like middle-finger earring in 2013. 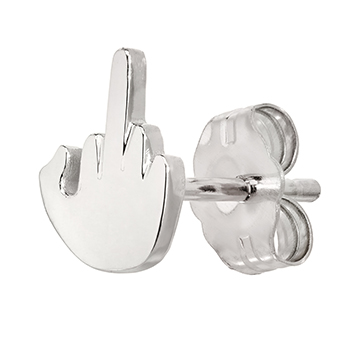 Two years later, Unicode announced a middle finger emoji and other frequently requested symbols, such as a taco. (Note: After Unicode approves new emojis, it still takes the phone manufacturers some time to update their operating systems with them.)

Happily, we didn’t need to wait another two years for additional updates: Unicode announced 72 new emojis this summer. And this Monday, Apple released its version of the new emojis in its developer preview of iOS 10.2. That’s pretty speedy! I’ve already pointed out that we’re finally going to get crossed fingers on our phones …

… though my customers have had that on their earlobes already. 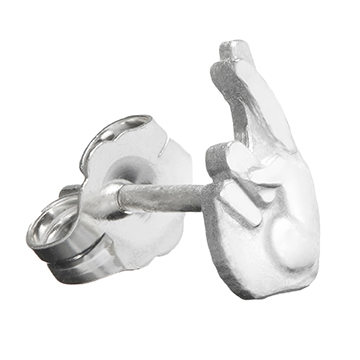 What’s causing a hubbub this week is Apple’s redesign of existing emojis to look more realistic. The new peach style is getting a bad review. People have been using the peach emoji to symbolize an ass, making it useful for sexting (along with the eggplant emoji for … you know), but Apple’s new peach doesn’t look quite as ass-like to some folks.

Y'all done misused the peach emoji so often apply had to change it. Just watch, they bout to delete the eggplant in the next update. pic.twitter.com/R3cbBaODbI

Now that I study it more, I think the peach still looks like a booty, but the old angle made the resemblance much more obvious. Alas! In order to get useful things like a shrug and a face palm, apparently we have to accept a less-perfect peach.

I haven’t yet chosen any emojis from the update to immortalize as earrings (hmmm … should I do the old peach?), but November’s Jewels of the Month include an old favorite: the cheerful alien. 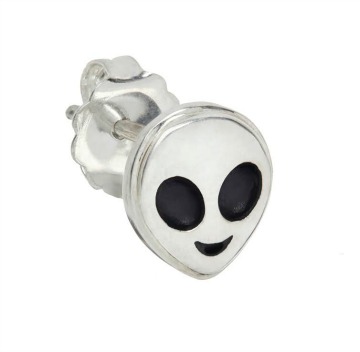 There’s also a new emoji of my own invention: the foam finger that fans wave at sporting events. I previewed that design earlier this year, but now it’s on my website, available for purchase. Get it for your big game! 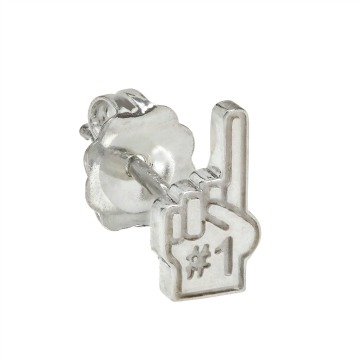 Because I’ve never felt that my emojis have to exactly match the real emojis, I’m still pondering an emoji change that Apple made in August. That’s when the company replaced its black pistol emoji with a green water-pistol emoji.

I introduced my little gun emoji earring in 2013, after some hesitation. I’ve been in favor of stricter gun control since the morning of Dec. 9, 1980 — when I learned that John Lennon was murdered the day before outside his New York apartment building. (In case you missed it, the Washington Post recently reported only 22% of Americans are gun owners. And 3% of Americans — the super-owners, with an average of 17 guns each — account for half the guns in America.) Despite that, I thought the gun emoji was adorable. I finally made a decision with the help of my friend Jay. As I wrote at the time:

“When I told my friend Jay that I couldn’t decide if I should do the earring, he wrote back, ‘I think that unless you try to make (functioning) .22 caliber earrings, you’ll probably be good.’ That helped me make up my mind. I swore I would never, ever make a tiny earring gun that shoots actual tiny earring bullets. This earring is 100% harmless, unless it kills you with its cuteness.”

I do believe that emojis make a bigger social statement than you might think. It was important that racially diverse emoji people were introduced last year. This year, we finally got gender-diverse people emojis, showing female characters doing more than getting massages and haircuts.

That said, I have a longstanding love of punk fashion and the little gun earring reminds me of Nancy Spungen’s famous gun necklace. I also have other, far more murderous designs. Hello, poison rings! Moreover, children see and use emojis online, but my jewelry isn’t for kids. I don’t expect one of my witty, grown-up customers to buy my Matilda sword necklace, buy a real sword, and slash at people like she’s Zorro. So that should be the end of it, right? Here’s the problem. 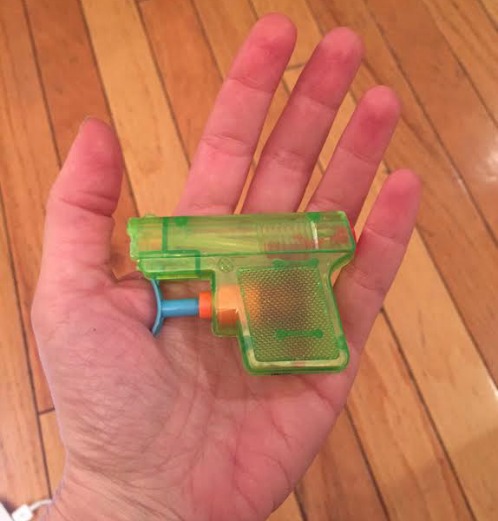 I found this small green water pistol on the sidewalk the very day that the water-pistol emoji was announced. I’m not kidding! That’s why I can’t stop thinking about it. I swear, the universe only communicates with me about trivial things. Like the time I was walking down the street wondering, “Do these jeans still suit me?” and a guy across the street yelled, “Hey! Those jeans really suit you.” Now I have had this small green water pistol deposited at my feet. What to do … what to do.

UPDATED TO ADD: A big thank you to Jennifer Heebner of JCK for including my new alien earring on her list of Halloween-themed jewels. The timing was perfect: I saw so many people doing “E.T. in the bike basket” looks this Halloween.