Green Party presidential candidate Jill Stein has (finally) done something useful. She is raising money to initiate the recounts of votes in the three key swing states of Wisconsin, Michigan, and Pennsylvania.

State recounts must be requested by a candidate — in some states, any candidate on the ballot can do it. Stein isn’t expecting to go from fourth place to victor. As the Guardian reports, “Stein and her campaign made clear they were acting because they wanted to ensure the election results were authentic, rather than because they thought she had actually won any of the contests.” In other words, she’s doing a big favor for those of us who are questioning the vote tallies for Trump and Clinton.

The Guardian notes the looming deadlines for recount requests:

“This Friday is the deadline for requesting a recount in Wisconsin, where Trump’s winning margin stands at 0.7%. In Pennsylvania, where his margin is 1.2%, the deadline falls on Monday. In Michigan, where the Trump lead is currently just 0.3%, the deadline is Wednesday 30 November.”

Recounts cost money. The combined cost for recounts in all three states is expected to be over $2 million. Stein’s fundraising goal is $2.5 million, and $1.5 million has already been raised. Let’s make sure she gets the additional $1 million.

Donate $5 if that’s all you can do. Never think your participation doesn’t matter. It does!

UPDATED TO ADD:  Please note that the original goal for the recount only covered the filing fees for the recounts. If you read Stein’s full page, you’ll see that there are many associated expenses. 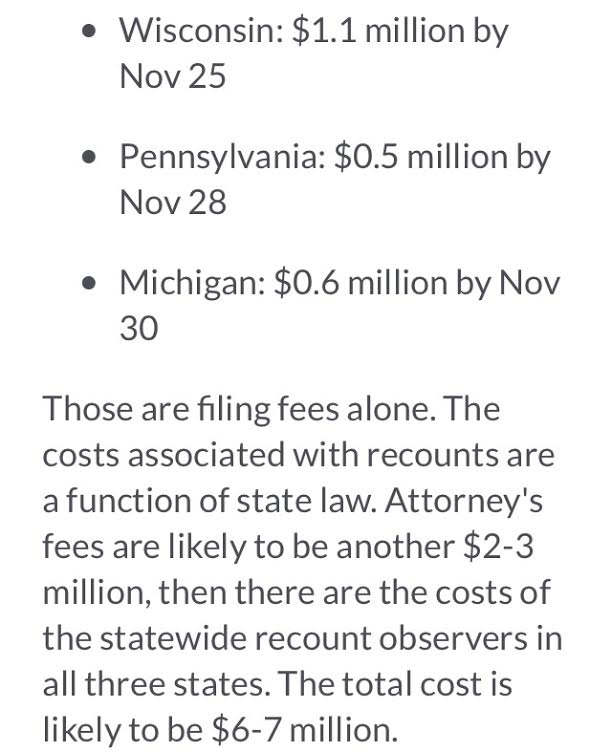 Some people have been very suspicious of this but it doesn’t bother me. It’s typical of a fundraiser (or petition) to set an initial goal that’s within reach, in order to give contributors a feeling of achievement. As for those who are accusing Stein of planning to steal all this money — Ha!  I’ve always disliked Stein for reasons not limited to her confusing comments about mandatory vaccination, but she would have to be a shameless sociopath to run off with money she’s raised so publicly. In other words, she’d have to be Donald Trump. She’s not.

Here are some other words for Stein skeptics from Amy Siskind.

To members of the media and prognosticators looking down their noses at the Jill Stein #Recount2016 efforts, here's what I say to you. pic.twitter.com/xo8TXka7cH

My more serious concern right now is whether a “recount” accomplishes the same thing as an “audit.” Some argue that they are two separate things, and that an audit is more important. I’m still trying to figure it out! Feel free to leave any pertinent information in the comments.

You might also like
ProPublica Wins a Fourth Pulitzer Prize
Vote and Get It Over With Already!
Abolition Now
Previous Post: « Audit the Vote: Make Your Voice Heard
Next Post: A Black Friday Sale Is Better When It’s Black and Gold »