I don’t think I’ve ever read a book review quite like Michiko Kakutani’s take on Volker Ullrich’s Hitler: Ascent, 1889-1939 for the New York Times. The review generated headlines of its own. The Huffington Post said, “New York Times Brutally Subtweets Trump With Hitler Biography Review.” The Washington Post’s take was, “This New York Times ‘Hitler’ book review sure reads like a thinly veiled Trump comparison.” 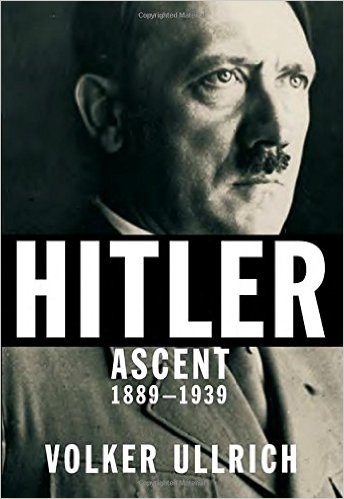 Click to buy on Amazon. (FYI: I do not make any money from shopping links to anything except my own jewelry designs.)

Kakutani — who has won a Pulitzer Prize for her criticism — says nothing about Donald Trump or present-day politics in her review. She doesn’t have to. Here are a few highlights from the review, which is titled, “In ‘Hitler,’ an Ascent From ‘Dunderhead’ to Demagogue.” Kakutani begins by asking:

“How did Adolf Hitler — described by one eminent magazine editor in 1930 as a ‘half-insane rascal,’ a ‘pathetic dunderhead,’ a ‘nowhere fool,’ a ‘big mouth’ — rise to power in the land of Goethe and Beethoven? What persuaded millions of ordinary Germans to embrace him and his doctrine of hatred? How did this ‘most unlikely pretender to high state office’ achieve absolute power in a once democratic country and set it on a course of monstrous horror?”

One of the answers comes in a paragraph in which Kakutani notes that Hitler was perceived as a narcissist whose “… manic speeches and penchant for taking all-or-nothing risks raised questions about his capacity for self-control, even his sanity.” But, she says, Ullrich points out Hitler’s compensating “keen eye for the strengths and weaknesses of other people” and his ability to “instantaneously analyze and exploit situations.”

In the next paragraph, Kakutani writes:

“Hitler was known, among colleagues, for a ‘bottomless mendacity’ that would later be magnified by a slick propaganda machine that used the latest technology (radio, gramophone records, film) to spread his message. A former finance minister wrote that Hitler ‘was so thoroughly untruthful that he could no longer recognize the difference between lies and truth’ …”

I’m going to order the book right now. You can’t dawdle after a New York Times review! I learned that when I procrastinated about going to Señor Frog’s in Times Square after Times food critic Pete Wells published one of the best restaurant reviews of ALL TIME last December.

The restaurant closed this August before I got to have a single Frogasm. SO SAD!

You might also like
I'm Not Here, I'm There
We Coulda Had a Bad Bitch, Presidential!
Musical Interlude: My Almost-Husband, Paul McCartney
Previous Post: « Jewelry for the Warrior Woman
Next Post: Two Fashion Favorites, Two Big Magazines »