I was planning to write about the fashion at last night’s Billboard Music Awards, but Game of Thrones is the only thing I can think about. 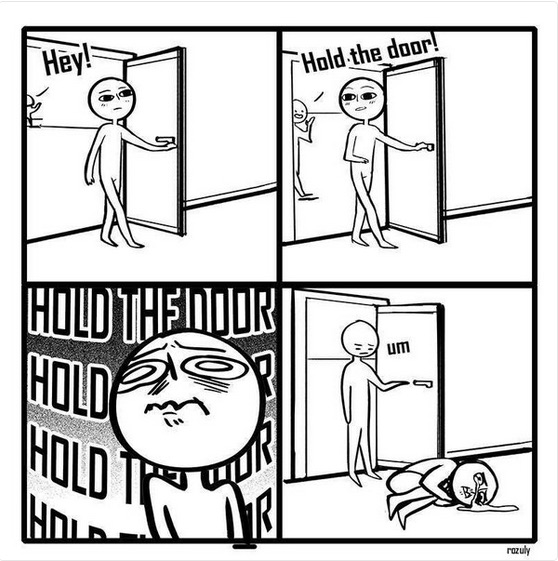 If anyone can find social-media accounts of the person who created this, I’d like to give credit!

My designing friend Stacy Lomman, who watched the show with me, was doubly traumatized. Not only did we learn that poor Hodor had been unable to voice anything but his slurred version of “Hold the door!” for most of his life, but then I insisted on talking at her for an hour about whether or not Bran Stark’s time-travel abilities make him the accidental supervillain of the show.

As an Apple ad warned us recently, time travel is dangerous …

… especially if you get caught in a causal loop. It’s like that episode of Family Guy where baby Stewie’s time machine accidentally sends him (and Brian the dog) out of the space-time continuum. While trying to get back into the continuum, Stewie creates the Big Bang, which in turn creates the universe … which ultimately leads to the creation of Stewie Griffin … who then causes the Big Bang … which creates the universe … Ugh! It’s best to stay away from time travel entirely. At least Stewie creates a whole universe! Bran Stark’s irresponsible time traveling made poor Wylis the stable boy lose his mind and wind up repeating “Hodor” for decades until he finally gets to the moment in his life in which he has to “hold the door” … to save Bran from the zombie attack precipitated by Bran. Thanks for both everything and nothing, Bran!

There are so many good recaps of this episode online but Slate’s is my favorite.

Speaking of time travel, I felt like I had stepped back into the 1980s when I saw Rihanna on Billboard’s pink carpet. At first glance, her dress reminded me of the Parachute vest I wore in ’85 and ’86.

This might be the sole surviving glimpse of that Parachute vest.

I think Rihanna looks better in that oversize style now than any of us did back in the day. Further proof that she can wear absolutely anything. I do wish I kept that vest from Parachute though. If only I’d had my “homegrown vintage” epiphany sooner!

You might also like
Pharrell Does It Again
Jewels of the Month: Vamping It Up for True Blood
What Wendy Wore: Musical Patrick Kelly
Previous Post: « The Week in Review
Next Post: Wendy Brandes Jewelry at JCK LUXURY »