I’ve still got David Bowie on the brain! My prestigious Best Dressed/Wear What You Want combo award for the 2016 Oscars goes to Carol and Cinderella costume designer Sandy Powell and her Bowie tribute look.

To be eligible for my Best Dressed/Wear What You Want honor, you can’t merely look beautiful. That’s too easy! You must dare to be different, and Sandy definitely did that. I was especially appreciative because Lady Gaga hit the Grammys red carpet with a fabulous orange-haired Bowie look, but then changed to much less successful costume for her onstage Bowie tribute performance. Sandy kept her look all night. As I mentioned in this post, I saw her at the Vanity Fair party, where I told her that E! television commentators had misidentified her as actress Tilda Swinton. She’d heard that something amusing had gone down but didn’t know the details. 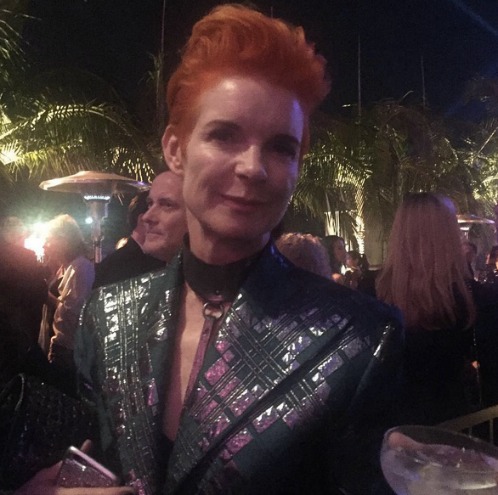 When I first found out — thanks to Twitter — that “Tilda” the actress was really Sandy the costume designer, I mentally misidentified her myself, thinking excitedly, “Wait, is that the American Express costume designer?!” Nope! The woman who wore a dress made out of 254 gold American Express cards in 1995 was costume designer Lizzy Gardiner, who won for The Adventures of Priscilla, Queen of the Desert. Gardiner had wanted to use the idea in the movie, but American Express wouldn’t go along with it. When she was nominated for an Academy Award, she said, she went through her list of past ideas. AmEx agreed to provide her with cards printed with her name — all one number short so that they were invalid — when she said the dress was for personal use.

Can you believe that as recently as 2011, Time Magazine put this dress on its list of worst-ever Oscar dresses? Seriously, check out that list. Nearly all the “best” dresses are completely unmemorable, while the “worst” ones are iconic. SMH.

Powell wasn’t the only costume designer making a big “Wear What You Want” statement. Jenny Beavan, who won for Mad Max: Fury Road this year, wore a fake leather jacket with black pants and striped scarf.

Check out the bedazzled skull on the back of the jacket!

I will admit that when I first saw Beavan, I had a moment of “Huh?” before I segued to “Bravo!” It is a shock to see anyone go this casual at the Academy Awards, but I love that she’s so true to herself. Two weeks before the Oscars, Beavan won at the BAFTAs while wearing a similar look. (BAFTAs presenter, comedian Stephen Fry, got slammed for joking that Beavan was dressed like a bag lady. Beavan said she and Fry are friends and that she wasn’t upset.) And in 1987, when she won her first Oscar for A Room With a View, Beavan accepted while wearing a jacket, big shirt, bow tie and scarf. Beavan called this year’s outfit an homage to Mad Max, saying, “I don’t do frocks and absolutely don’t do heels, I have a bad back. I look ridiculous in a beautiful gown.” How can you be a costume designer if you don’t like dressing up? Easily. Salon says Beavan has explained herself this way:

“I have no interest in my own clothes or in clothes in general. My love is creating character through clothes.”

Beavan and Mad Max richly deserved this year’s costume-design award. Check out the New York Times and Vanity Fair stories on how those costumes got made.

Come back tomorrow for all my Best Dressed/Wear What You Want runners-up! Oscar fashion was a lot more interesting to me this year than it has been recently, so I’ve got to shout out all the good looks.

You might also like
What Wendy Wore: AGTA Spectrum Awards in Tucson
Oscar Fashion Flashback: Jennifer Hudson in 2007
Lady Gaga at the Grammys
Previous Post: « The Best Jewelry and Dress Combos at the Oscars
Next Post: Oscars 2016: My Best Dressed Runners-Up »