Another Hollywood awards show has come and gone without a good candidate for my coveted Best Dressed/Wear What You Want combo award. Like the Critics’ Choice Awards earlier in the month, Saturday’s Screen Actors Guild Awards had a lot of attractive red-carpet looks, but none that gave me that special “so wrong it’s right” feeling.

I did pause for a moment over January Jones, who should have known her voluminous Schiaparelli dress would ruffle fashion police feathers. I always appreciate an act of defiance.

Plus, I do love bustles almost as much as I love butt bows.

But that dress was a strange kind of mullet — Sister Wife in the front, party in the back –, so I’m splitting my awards between two other women. Best Dressed goes to Alicia Vikander, who won Best Supporting Actor for The Danish Girl, while wearing sequined-and-slit Louis Vuitton.

The Fug Girls noted that this graphic look would fit in nicely with Don Draper’s decor in Mad Men, which makes me sorry that Jones — who played Betty Draper to John Hamm’s Don on Mad Men — wasn’t the one wearing it.

The Wear What You Want winner is 82-year-old comedy icon Carol Burnett, who received SAG’s Lifetime Achievement Award. She showed up wearing fleecy Ugg slippers, which she posed in before switching to black pumps. 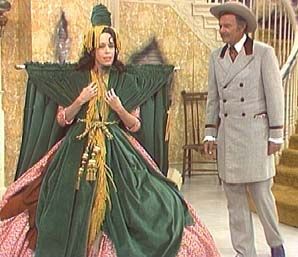 Carol Burnett wearing the draperies in her “Went With the Wind” sketch.

… but at least they couldn’t actually catch someone in the eye. Safety first! Besides, Carol deserves all the awards, doesn’t she?

Plus, this creates the perfect opportunity to share this Carol Burnett show “Family” sketch, in which Carol, Vicki Lawrence and Dick Van Dyke lose their composure as Tim Conway slowly unravels a story about circus elephants. Stay with it until Lawrence wins the sketch with one line that has Conway literally rolling on the floor laughing.

Every so often, I think of Conway’s line, “I was at this freak show one time and I saw these Siamese elephants,” and laugh out loud regardless of where I am.