I can still barely believe it, but we all know it’s true. David Bowie died of cancer yesterday, two days after his 69th birthday and the release of his 25th studio album, Blackstar. His producer called Blackstar a “parting gift” for Bowie’s fans.

I haven’t been able to think of anything besides Bowie today, but the song that’s been playing in my head isn’t his iconic “Space Oddity” or even “Ashes to Ashes,” which I listen to almost daily. Instead, I’m stuck on a song he once laughed off as “… a piece of sexist rock ‘n roll. It’s about picking up birds. It’s not very cerebral, that piece.” But in my high school years, when I was glued to the music videos on MTV, I was always excited to see the video for “Blue Jean” — especially if I was by myself and could dance and snap along to it without being embarrassed in front of the family. Before I looked it up today, I bet myself that “Blue Jean” would be from 1983, because a lot of stellar music came out that year. But it’s from 1984. Close enough. A lot of stellar music came out that year too. I don’t remember if I ever saw the original 20-minute version called “Jazzin’ for Blue Jean,” directed by Julien Temple, who started out working with the Sex Pistols. The edited-for-length version is the one I knew and loved. In it, David Bowie plays a dorky guy trying to impress a girl at a club by saying he knows the singer … who is, of course, non-dorky David Bowie. It’s like those DirectTV commercials running these days: DirectTV Bowie vs cable Bowie.

The girl that dorky, cable Bowie is trying to woo is dressed in the height of’80s chic. Piled-up hair, button earrings and are those dolman sleeves? I think they’re dolman sleeves. Naturally, such a vision of female perfection only has eyes for sexy, DirectTV Bowie — the one who dramatically unwinds his turban on a runway-like stage. Yep, cool Bowie kicks his own dorky ass in this video.

Bowie left the turban behind for his performance (in a pre-recorded clip) of “Blue Jean” on the first MTV Video Music Awards, which aired Sept. 14, 1984, two weeks after Bowie’s Tonight album came out.

That was the same VMA show that featured Madonna singing “Like a Virgin” while rolling around in a wedding dress. Not a bad start for the VMAs.

Another Bowie song that always brings a smile to my face is the cover of “Dancing in the Street” he did with Mick Jagger, though it’s not exactly the song itself that makes me giddy. There’s an episode of Family Guy in which raving idiot Peter Griffin is attempting to homeschool his children. As part of a history lesson, he announces, “… 1985 brought us the gayest music video of all time.” The first time I saw this, I thought, “Oh my God!” about Family Guy‘s pointedly un-PC joking. We don’t say things like “gayest” now! Especially about a video I happily watched about a thousand times back in the day. Then the video played. The entire video.

Anyway, Bowie was never shy about defying gender stereotypes, a trait that was brilliantly documented in the “David Bowie Is” exhibit I saw at London’s Victoria and Albert Museum in 2013. (I’ve been wondering why that exhibit hasn’t traveled to the Metropolitan Museum of Art in New York; it was a sell-out in London.) 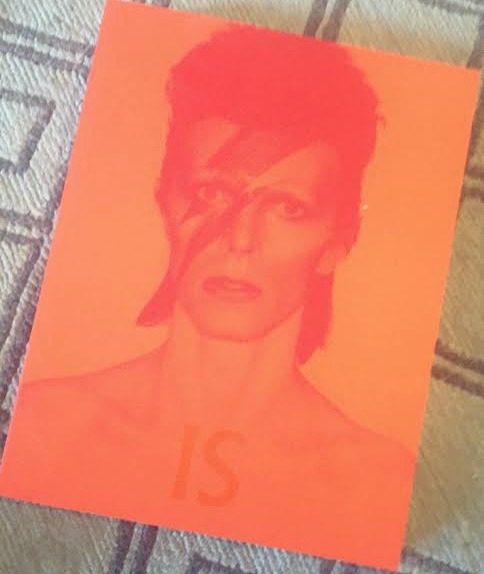 As I wrote at the time, I usually breeze through museum exhibitions because I’m a speed reader of wall captions. I wind up wandering around the gift shop while MrB carefully absorbs all the information. This time, MrB searched for me in the gift shop for 45 minutes, not realizing I was still in the exhibit, dancing to concert clips while surrounded by Bowie’s iconic costumes. When I finally emerged, MrB had to wait another 45 minutes in the gift shop while I examined every single souvenir possibility. The catalog was a necessity for the photos of the amazing costumes, including many by Kansai Yamamoto. 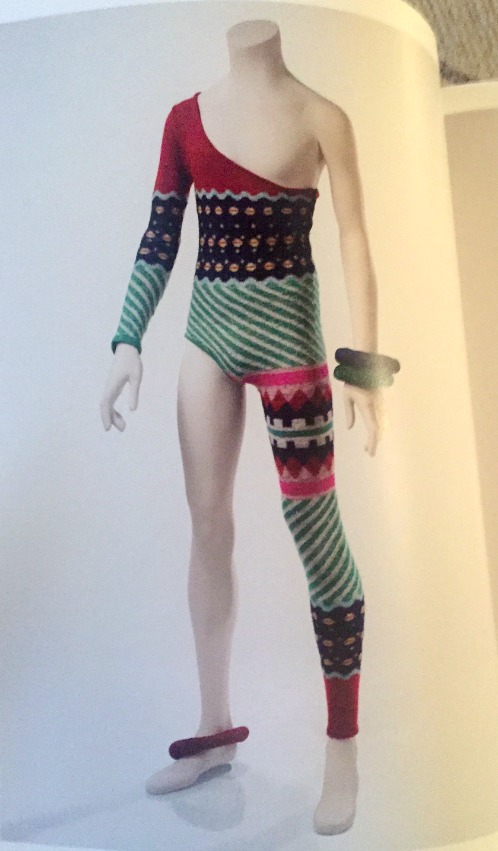 Designed by Kansai Yamamoto for the Aladdin Sane tour.

Even when Bowie wore a double-breasted suit, he accessorized fabulously. 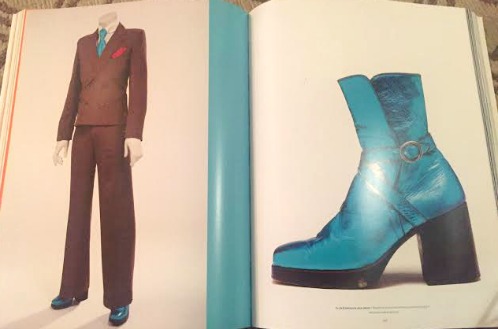 I would HAPPILY wear these turquoise boots. 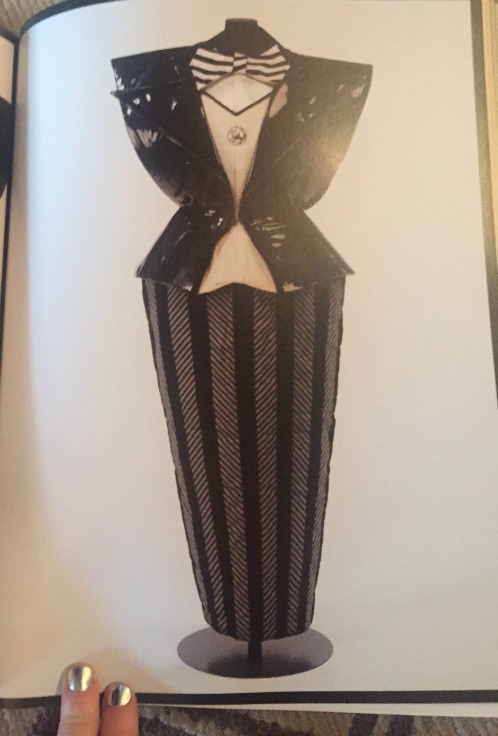 This was designed by Mark Ravitz and David Bowie, and inspired by Sonia Delaunay’s designs for Tristan Tzara’s 1920s play “Le Coeur a Gaz.”

That was the costume Bowie wore on Saturday Night Live in 1979. I was watching the videos from that performance this New Year’s Eve, while I wrote a post about one of his backup singers, opera singer and performance artist Klaus Nomi. The other backup was cabaret singer and performance artist Joey Arias. At the beginning of “The Man Who Sold the World,” Bowie stands stiff as a mannequin in that exaggerated, tux-like costume. Klaus and Joey pick him up and carry him to the front of the stage. It’s a must-see. Unfortunately, the full performance keeps being yanked from YouTube but you can see that one moment here.

Entertainment Weekly has put together a list of 20 other essential David Bowie videos that is worth a long look. The list includes another jaw-dropping clip from the 1979 SNL appearance: The song is “Boys Keep Swinging” and Bowie sings it while looking like a NSFW marionette. There’s also the full performance and (sniffly) interview he did in 1974 on the Dick Cavett Show, while in the midst of his cocaine addiction.

Here are some other links worth checking out. They’re in no particular order.

– 20 great photos from NME.
– 20 deep-dive songs from Rolling Stone.
– A plan announced — prior to his death — to honor Bowie at Carnegie Hall in March. Hopefully, it will stay on the schedule as a tribute.
– A lengthy 1996 interview with Mick Brown for the Telegraph Magazine, in which Bowie remembers John Lennon and says, “I’m a real hoarder.” I so appreciated his hoarding habits when I went to that V&A exhibition! Everything was from his own archives.
– Alfred Soto’s thoughts on Bowie’s conflicting comments about his sexuality, from Spin.
– Bowie’s just-released video, “Lazarus.”
– The story of Blackstar.
– A recorded 1988 interview that has been charmingly animated.
– Bowie’s 1983 thoughts about the dearth of black artists on MTV.
– Kurt Loder’s 1987 interview of Bowie for Rolling Stone.
– William Burroughs meets Bowie in 1974.
– My almost-husband Paul McCartney paid tribute to Bowie last night, sharing a 1985 photo taken by Paul’s late wife, Linda.
– Madonna’s first concert was Bowie and she says it was life-changing. She also shared a photo of him.
– As Jareth, the Goblin King, in the movie Labyrinth. (Thanks to gorgeous reader Catherine for sending this to me.)
– Bowie in 1964, aged 17, talking about long hair.
– Very fun interview from August 2002 for the magazine Blender. Bowie is in great spirits and answers questions about Nirvana, Mick Jagger, and Andy Warhol.
– Bowie performing “Heroes” at The Concert for New York City in October 2001. It was a post-9/11 benefit show. I was there and it was the only time I saw Bowie live. 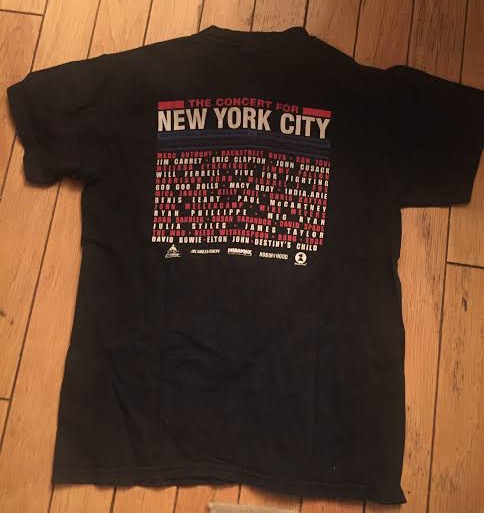 The back of the concert t-shirt.

I may add some more links to that list as inspiration strikes. Right now, however, I’m re-watching the scene 1997’s Men in Black where Agent K (Tommy Lee Jones) pops in an 8-track cassette of Elvis Presley’s Promised Land and turns the volume up. Agent J (Will Smith) — aggravated from being bounced around inside K’s speeding, upside-down car — says, “You do know Elvis is dead, right?”

K cheerfully replies, “No, Elvis is not dead. He just went home.”

I’m pretty sure that David Bowie just went home too.

You might also like
My Best Dressed at the SAG Awards Is ...
Today's eBay Picks Continue the Pink Theme
Wednesday's Video: 1989 Dress and Slow Fashion
Previous Post: « RIP, David Bowie.
Next Post: David Bowie’s 1976 Playboy Interview and Other Links »