Pablo Picasso is often quoted as saying, “Good artists copy, great artists steal.” If he really did say that, he wasn’t the first.  Quote Investigator, which hasn’t confirmed the Picasso attribution, reports that T. S. Eliot expressed a similar sentiment regarding poets in 1920. Eliot, in turn, may have been influenced by an 1892 line from W. H. Davenport Adams, though Eliot transposed the elements of Davenport Adams’s concept. What Davenport Adams wrote was, “That great poets imitate and improve, whereas small ones steal and spoil.” This actually makes much more sense to me than the Picasso version, which was given new life by Steve Jobs in 1996. Davenport Adams for the win!

I was thinking about the possible Picasso quote today because MrB and I are still in Madrid, where we visited “Guernica,” Picasso’s great anti-war painting, at the Museo Nacional Centro de Arte Reina Sofía in the afternoon. That, however, didn’t make me think of the quote. I had already been contemplating it after our morning visit to the Prado Museum, where we saw a painting by Rubens next to a painting by Titian. 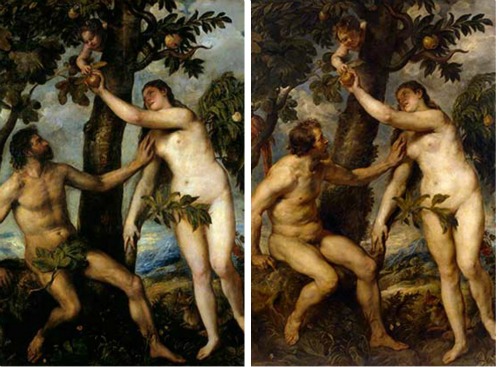 Titian on the left. Rubens on the right. Images courtesy the Prado Museum, via Studio Rousar.

Our tour guide explained that in the 17th century, the Spanish king, Philip IV, allowed Rubens to copy — at full scale — many of the Titians in the royal collection. I neglected to ask why Rubens would want to do this, and pondered it off and on during the rest of the day, until I could consult with Poodle. According to this paper by Jeremy Wood, the Rubens copies were never intended for sale. They were for the artist’s own collection. D’oh! I can’t believe I didn’t realize that on my own. It’s not like Rubens could take an iPhone photo of the paintings he enjoyed, or buy a postcard of them from the museum gift shop, or beg the king for the original. If he wanted to have his favorite Titians, he had to paint them himself. As you can see, there are still differences between the paintings. I’d call the Rubens work a good example of Davenport Adams’s “great poets imitate and improve” concept. If you’re ever in Madrid, be sure to see this (and many other great works at the Prado), because you need to see the pair of paintings life-size to appreciate them.

While I’m on the topic of art, I was recently reminded of a great 2014 quote from New York Times columnist Maureen Dowd, who, inspired by the sociopathic female character at the center of the book/movie Gone Girl, wrote:

“Art is meant to explore all the unattractive inner realities as well as to recommend glittering ideals. It is not meant to provide uplift or confirm people’s prior ideological assumptions. Art says ‘Think,’ not ‘You’re right.'”

I do recall reading that column at the time, but the line came to my attention again this month when RuPaul tweeted it. RuPaul, by the way, didn’t copy or steal the quote, try to improve upon it or wind up spoiling it. He correctly attributed it to Dowd.  But, he is a participant in the artist copying/stealing concept in another way.  In 2014, I placed RuPaul in the middle of a chain of imitation/improvement/whatever when I realized that Nicki Minaj kind of looked like RuPaul who kind of looked like Faye Dunaway playing Joan Crawford, who — of course — looked like the real Joan Crawford, who might have looked like someone else I haven’t found yet.  It’s “Bitch stole my look” across decades!

You might also like
Throwback Thursday: Madonna and Her Keith Haring Denim Jacket
Meet Photographers Louviere + Vanessa
Up Against My Wall, Sarah Ashley Longshore!
Previous Post: « Throwback Thursday: Juana la Loca in Spain
Next Post: The Week in Review »