Today I found out that fitting oh-so-perfectly into a New York Times consumer-trend story can make a person feel really … basic.

The story, called (in the print edition) “Earlobes Are a Canvas for Women Over 30,” reports:

“…many women in their 30s and 40s are doing something they had not considered for maybe a couple of decades: They are adding second and third piercings to their ears, either in newly created holes or in long derelict ones. Typically opting to fill them with an array of tiny jewelry in precious materials, they tend to aim for an understated curation rather than, as in a prior era, edgy defiance.”

Could I BE more typical?

Just like the article said, after living for a “couple of decades” with three ear piercings, I added three more in the past year and a half. I started in May 2014 by getting a second lobe piercing in my right ear, a couple of months before the Times ran a precursor to today’s story. That one was called “Piercing Adopts a Delicate Balance,” and focused on piercer J. Colby Smith of New York Adorned, who specializes in “subtle and sophisticated” piercings for celebrities and 20-something fashion-industry types. 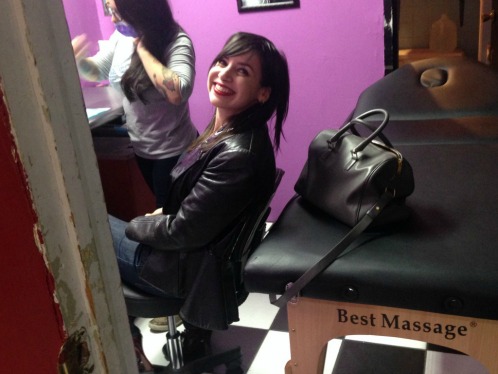 I’d forgotten about last year’s story, only rediscovering it when I searched for my piercing parlor photo. For a moment, I thought, “Did they just rerun last year’s story today?” because I was looking at two stories about multiple, delicate piercings, both of which mentioned New York Adorned. But today’s piece has the age spin, so that’s an updated element.

Obviously, I have a better-than-basic reason to want more piercings: I need to show off my own stud earring designs! I got really excited to keep going after seeing this fabulous gif made by Nylon Magazine with four of my emoji earrings last July.

It took me a while to get to the next piercing, but I got my left tragus done in late August at — guess where? — New York Adorned. I went to Adorned’s Cassi Lopez instead of Smith.

I thought that the last bit of unpierced lobe in the photo above looked too naked, so I went back to Cassi just a couple of weeks later for a third lobe earring on the left side.

The continued growth of the piercing/tiny stud trend amuses me. Even last year, the style had already been around long enough to fall into the phenomenon I wrote about in a Huffington Post story called, “Not So Fast There! The Surprisingly Long Life of Fashion Trends.” In that piece, I pointed out that fashion trends don’t come and go as quickly as we think they do: they can take seasons — or even years — to develop, and then linger for as long as a decade.

I’m slightly less amused by a memory revived by the first paragraph of today’s Times story:

“Over the last few years, the trend of wearing mismatched stud earrings, frequently in multiples, has continued to grow.”

It’s in the wake of that trend that we mature wimmins are piling into the high-end piercing parlors, says the Times. Sigh. When I first introduced my emoji-inspired, mix-and-match single stud earrings in April 2013, my publicist pitched the concept to media and stores. I don’t recall ever getting a bite. When I did get (much appreciated) coverage of the earrings, it was for emoji trend pieces and once for a Breaking Bad finale item, but not for the single-earring concept. I just looked through my old correspondence with my publicist, and we had even changed the pitch to “I know you’re not doing a single-earring story now but when you DO do one, which you will, remember us.” No one remembered!

People simply weren’t that interested in the single-stud concept in 2013. In fact, one of the many reasons I pulled my jewelry from Amazon after giving it a try that year was because I was mostly selling my single earrings there, and a lot of customers didn’t understand that that’s what they were purchasing. I had to check with every buyer to see if s/he noticed that the listing mentioned “single earring” three or four times and then cancel the sale for everyone who thought they were buying a pair. Now, two years later, the media keeps returning to the idea of multiple piercings for all ages, and linking it to the popularity of … single stud earrings. As I’ve said before, being too early can be as bad or worse than being late in fashion. It’s like a train station. It doesn’t matter if you’re two hours early or five minutes late — either way, you can’t board the train!