Check me out talking about the fashion and jewelry industries on American Fashion Podcast!

AFP hosts Seth Friederman, Charles Beckwith and Lisa-Maria Radano invited me and menswear designer/ fellow Fashion Group International Rising Star awardee Loris Diran to dish the dirt. We had so much to say that the podcast had to be run in two parts.

After the taping, Loris modeled my barbed wire designs for me.

They look good on men too, don’t they?

Lisa-Maria had to leave right away, but after playing with the jewelry, I managed to take a picture with all the fashion-biz fellas. 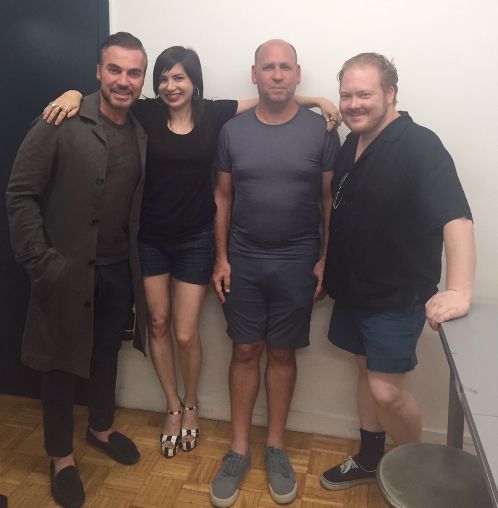 From left: Loris, me, Seth and Charles.

The experience was tons of fun, and I hope to do it again. Maybe next time, Loris will name names … though he came pretty damn close anyway.

Here are the links once again.

UPDATED SEPT. 2, 2015, TO ADD: A few days ago, Esquire ran an article on Simon Spurr. Simon won the Fashion Group International Rising Star award for menswear in 2012 — the same year I won for fine jewelry. I’ve been wondering about Simon, who left his self-named company due to a falling-out with his investor that came, sadly, after the FGI win as well as a nomination for a Council of Fashion Designers of America award. I knew he lost the rights to his own name. I’ve written about this kind of thing before. In business generally — but maybe in the fashion industry in particular — it’s important to look a gift horse in the mouth when it comes to potential investors. There are many examples of designers losing their names after a dispute with their backers. Now Esquire has all the details here.

This brings me back to an issue I’ve written about on the blog and brought up again during the podcast: Fame does NOT equal fortune. In fashion, a designer can have the important department-store accounts, celebrity customers and glowing reviews, and it can all be falling apart behind the scenes. If you’re struggling to make it in a creative industry, don’t get intimidated by a peer’s “success.” Trust me: You do not know the other person’s business reality. Focus on your own business (and learn from other people’s mistakes).

You might also like
What Wendy Wore: That 4th of July Outfit Again
Musical Interlude: Madonna at Madison Square Garden
In the News/On the Blogs
Previous Post: « My Best Dressed at the 2015 MTV VMAs Is …
Next Post: Recommended Reading: The Children of Strangers »