I can’t believe that I wrote about Ariana Grande’s signature cat-ear headbands AND her breakup with rapper boyfriend Big Sean yesterday without mentioning Sean’s song “Stay Down.” I was so engrossed in using my stud letter earrings to spell the abbreviation for “I Don’t Fuck With You” — Sean’s hostile ode to a previous ex — that I neglected to point out the way “Stay Down” sings Ariana’s praises:

He’s talking about the way she dresses like a kitten all the time, right? RIGHT??!?! Okay, he’s not, but at least a billion dollars is a respectable sum. Ariana and Sean avoided an awkward Dr. Evil underpayment moment there.

Speaking of pussycats and money, my new favorite commercial is the Geico ad where a guy sinking in quicksand begs a cat to fetch help, to no avail.

It looks to me like the cat in question is an Exotic Shorthair like FitzRoy and Purrkoy. Why didn’t one of my kittehs get the call for that job? I don’t need a billion-dollar pussy; I would settle for one worth a hundred grand or something.

If you’d like a $3,800 pussy, check out the 18K-gold FitzRoy earring-jacket-and-stud combo that just went up on my website. 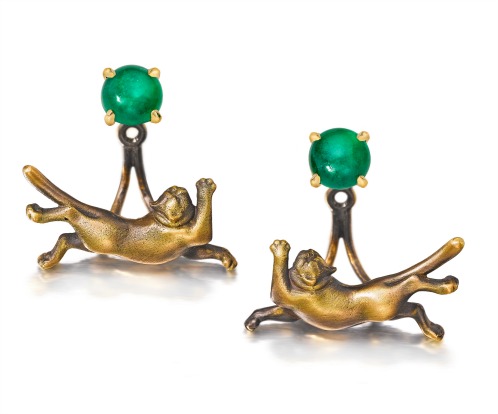 This time, the jackets are shown with emerald cabochon studs, which total two carats. Emerald is May’s birthstone so act fast: I only have one pair in stock!

You might also like
Wednesday's Video: Poison Rings in Action
What Won't Be in My Next Collection: Family Guy Jewelry
At Least There Were No Cement Shoes
Previous Post: « Musical Interlude: Ariana Grande and Her Cat Ears
Next Post: What Wendy Wore: Roland Mouret and Prada »