When I first heard about the concert, I entertained the notion of going. I’ve never seen Jersey boy Bruce Springsteen live, even though I was growing up in New Jersey when his career was white-hot. I liked hearing the name Wendy in “Born to Run” but other than that, I avoided his music like the plague. I was already depressed and living in New Jersey — I didn’t need to hear any depressing songs about living in New Jersey! A lot of people want to hear their lives represented in music or seen in other art, but that seemed pretty redundant to me. In the ’80s I was obsessed with music from England in part BECAUSE IT WASN’T ABOUT NEW JERSEY. Being depressed in London sounded much more glamorous to me. Other than London, I was interested in the New York scene, including punk, New Wave, and a young Michigan transplant/dancer/occasional nude model named Madonna. 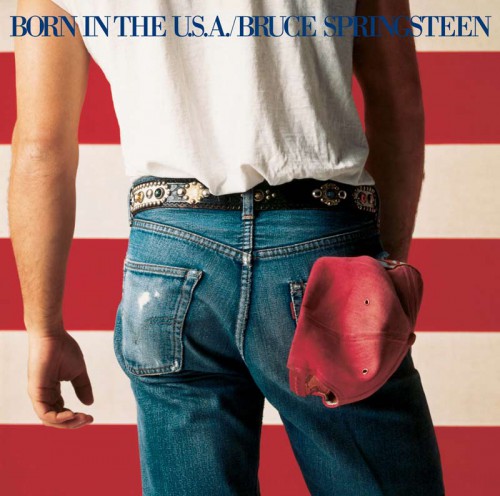 Springsteen’s Born in the U.S.A. — which dealt with America’s treatment of veterans, among other topics — was a huge hit in 1984. I didn’t buy it.

That said, I know Bruce puts on a stellar live show, and in recent years, I’ve thought, “He’s a classic; I need to see him once.” After all, I did use Bruce’s cover of Tom Waits’s “Jersey Girl” as the first-dance song at my wedding. I was disappointed a couple of years ago when I left Paris a day or two before Bruce played there; it would have amused me to see him in the City of Light rather than the State of Teenage Misery. So, yeah, I would have liked to go to tonight’s concert. However, I’ve gotten picky about my general-admission concert experiences, and if there’s a front row, I want to get to it. That was challenging enough at the 60,000-person Global Citizen show I went to this September and the similarly sized Eminem performance I saw at Lollapalooza in 2011. Tonight’s concert is expected to attract 850,000 people! I wonder if people have been camping out for a week to secure the best spots. I think I’ve got to work up to something like that.

Maybe gorgeous singer Jade Novah will report back on what it’s like to stand on the stage and see that many people. Jade performed at Eminem and Rihanna’s Monster Tour this summer and she’ll singing her heart out at tonight’s concert too. Doesn’t Jade look adorable in the custom necklace I made her? 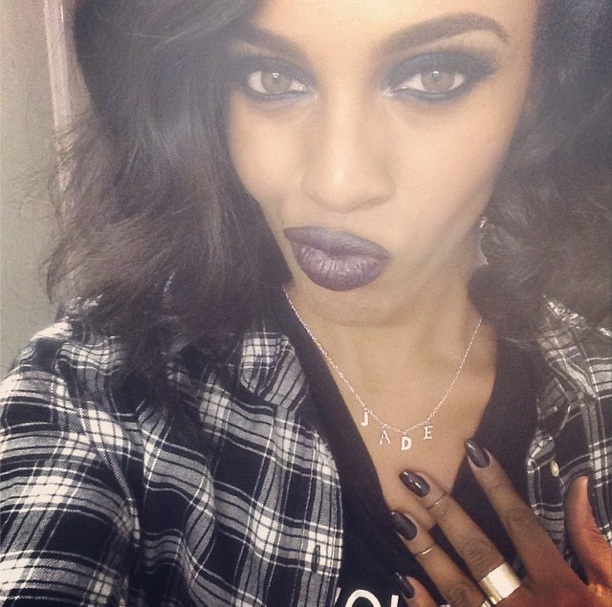 You can hear Jade’s incredible voice on YouTube thanks to the cover of Rihanna’s “Diamonds” that she did in 2012.

More of Jade’s music is available on SoundCloud and iTunes.

Because I wasn’t trying to set up a tent near the Mall in D.C. this Saturday, I was free to line up with my concert-going friend Jessie at New York City’s Terminal 5 to see the hot English (I still like the English!) singer FKA twigs. I got there around 3 p.m., Jessie arrived a little later, and FKA twigs went on at 10:30 p.m. It was totally worth the wait to be in the first row. Twigs has an ethereal Kate Bush vibe, and I love me some Kate Bush. FKA twigs made her U.S. television debut on the Tonight Show with Jimmy Fallon with her song “Two Weeks” four days before the Terminal 5 concert.

My best photos of FKA twigs are on Flickr. Click the photo below to see them. If you’re a fashion/shoe fanatic, you’re going to want to see her gladiator-style hip-high boot (she was only wearing one), trust me. This gal has great style. 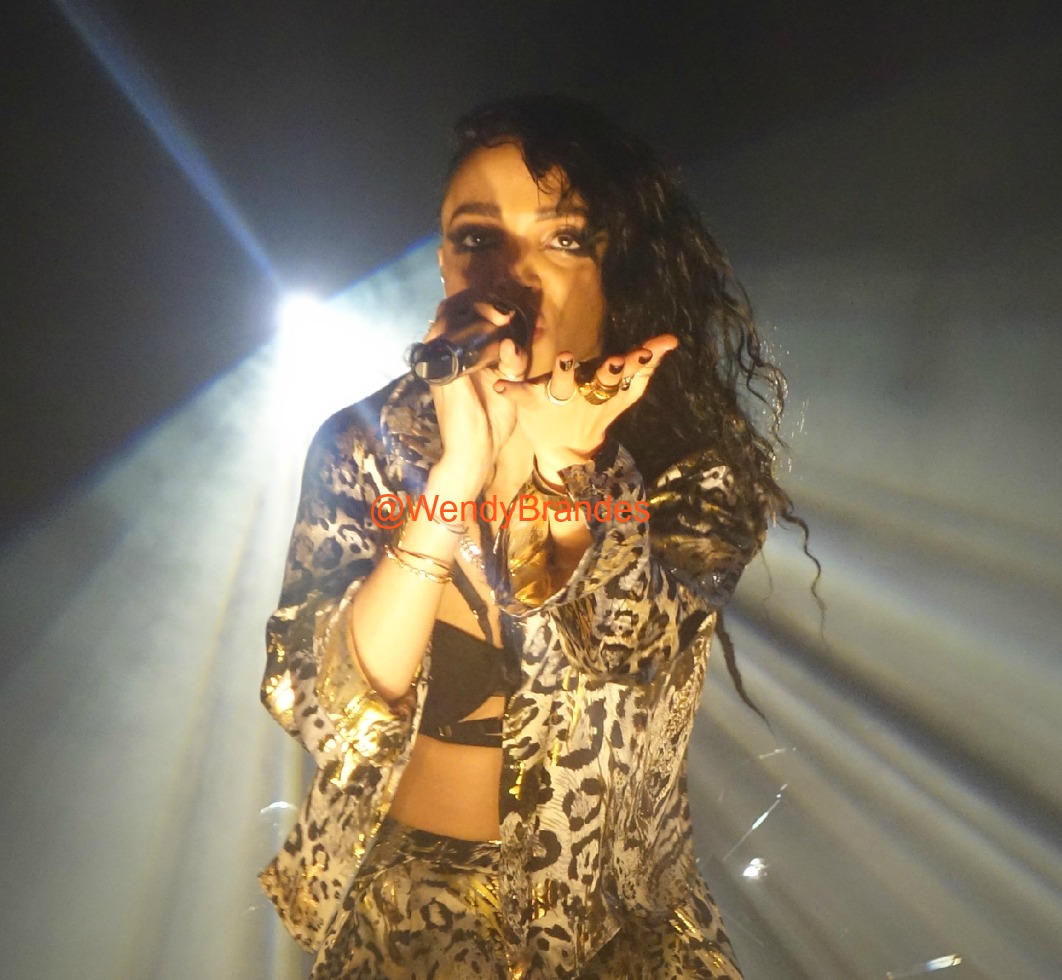 She also has a great body, as you can see from my video of the song “Numbers,” which is from her debut album, LP1. Twigs had taken off her open animal-print top already but I’m not sure she wanted to take off the matching side-split pants as well. She seemed to struggle with them for a bit, then went to the back of the stage and took them off for this song, after which she thanked her mother for making sure she wore sizable knickers. Then she put the pants back on for the rest of the show. I’m not sure why, because if I had that body, I would never wear more than a bra, panties and one gladiator boot for the rest of my life.

Recently, FKA twigs has been in the news for something other than her music. Thanks to her relationship with Twilight star Robert Pattinson, she’s gotten a lot of racist hate online from Twilight fans who are still obsessed with Pattinson’s previous off-screen relationship with his on-screen leading lady, Kristen Stewart. That relationship fractured in 2012 when Stewart was caught with married film director Rupert Sanders. It ended in 2013, with Pattinson recently saying to Esquire UK, “Shit happens, you know? It’s just young people … it’s normal! And honestly, who gives a shit?” Apparently, a bunch of racists do. SMH.

Anyway, another stylish performer I enjoy is rapper Hi-Rez. I haven’t seen him live yet, but I did make him some jewelry. I was psyched when he announced some new merch recently and I saw the chain I made him featured on some of the t-shirts.

And yet another one of my musician customers, gorgeous Skylar Grey, had a big moment yesterday while performing the hook for Nicki Minaj’s new song, “Bed of Lies” at the MTV Europe Music Awards. A segment of “Bed of Lies” begins with Skylar at the piano at the 1:38 mark in this video.

Finally, jewelry-loving rapper and my personal friend Gangsta Boo had a stellar October. Her mixtape with Beatking called Underground Cassette Tape Music was named Mixtape of the Week by Stereogum (you can download the mixtape here). Plus, she made an appearance on the album Run the Jewels 2, which is getting rave reviews. Spin picked it as Album of the Week and called “Love Again,” the track that Boo is on, “the standout cut.” That track starts out with rappers El-P and Killer Mike — who, as a duo, call themselves Run the Jewels (a name I really like) — doing the usual male rapper sexual boasting. Like Spin said, the song “sounds inauspicious at first, as the duo takes turns bragging about a new conquest with ‘dick in her mouth all day’…” As I was listening to that, I KNEW what Boo was going to bring to the mix. I’ll let Spin describe it: 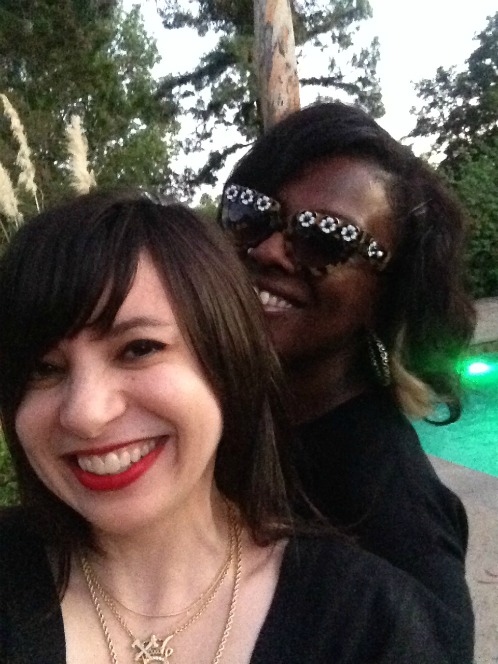 Me and Boo in September. She’s always wearing my damn sunglasses!

Boo also did an interesting interview with i-D this summer. Read what she has to say about working in a man’s world for 20 years here.

UPDATED TO ADD: Jade Novah is also backing Jessie J and Jennifer Hudson tonight! A busy day for her. Don’t forget to watch the Concert for Valor at 7 p.m. ET.

UPDATED AGAIN TO ADD: For the people hitting my blog while searching for the reason that Bruce Springsteen was booed at the concert … he wasn’t! It’s traditional for his audiences to chant “Bruuuuuuuuuuce” at him. Even I know that because it’s been a thing for so long, but it can sound like a boo if you don’t know what to expect.