It’s good to know that People Magazine is capable of recognizing when it’s done something wrong.  Last night, during Scandal‘s premiere, the magazine tweeted (and quickly deleted):

As the blog Jezebel later asked, “Because you can’t mean serious business with natural hair?”

People didn’t acknowledge the deletion at the time, but simply went from live-tweeting Scandal to live-tweeting actress Viola Davis’s new show, How to Get Away With Murder. That’s when it fumbled again. 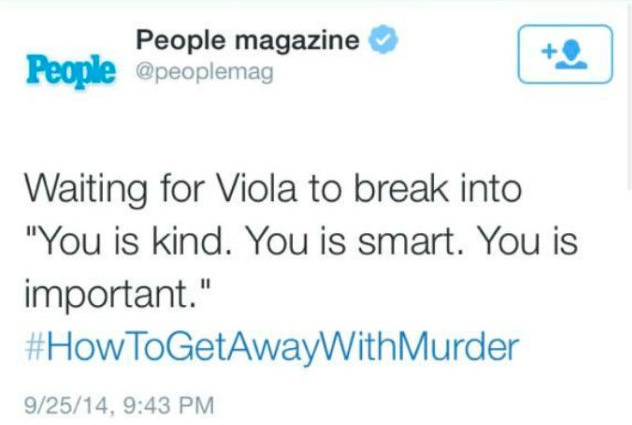 The quote is from Davis’s Oscar-nominated role as a maid named Aibileen Clark in The Help. Viola Davis is playing a law professor on HTGAWM, so a number of people were annoyed that, in this context, the magazine chose to refer to a line from a more stereotypical role for a black woman.

This time, People took note of the complaints and apologized.

Too bad I never got an apology for the sneering, sexist Scoop item in the print magazine that I wrote about over two weeks ago.

That’s the one where the magazine blamed female celebrities for the theft of their photos and mocked model Kate Upton for “taking almost-naked pictures for magazine covers” — covers that include, most famously, Sports Illustrated, which is owned by Time Inc., just like People Magazine.  After getting no response from People on Twitter, I contacted their public-relations office, where I reached an intern. Finally, 12 days after I first started asking People about the item, I got a message from a People spokesperson: “We received your messages.  PEOPLE declines to comment.”

People did run one letter of complaint from a reader in a subsequent print issue, so perhaps People editor Jess Cagle feels that was enough of an acknowledgement.

It was my friend Stef who pointed out last night’s tweets for me, in an email that added, “What is going on at People?? Are they TRYING to piss off their women readers?” (I know Stef because I hired her when I was managing editor of People’s website in 1999. When I left, she succeeded me as managing editor.) That would be a bad thing to try, considering People is a billion-dollar magazine, and the vast majority of its readers are women. You’d think that that bottom line would earn females covered by People a little more respect, eh? Guess not.