In honor of tonight’s MTV Video Music Awards, the always-highlarious Michael K of the blog Dlisted shared a classic clip from the 1995 VMAs, when Courtney Love threw a MAC compact at Madonna before crashing the latter’s pre-show interview with Kurt Loder. “Courtney Love is in dire need of attention right now,” Madonna observed.

I remember that like it was yesterday! I also remember how much I loved Madonna’s look that night: Valley of the Dolls hair and a blue satin shirt by Tom Ford for Gucci.

How much did I love that look? So much that when Ann Taylor came out with its version of the satin shirt, I got three: red, blue and black. I wore at least one of those weekly with my black stretchy pants from the Gap for a couple of years. For proof, I present these photos of my favorite shirt — the blue one, of course, like Madonna! — which was taken in December 1996, over a year after Madonna’s VMAs appearance. 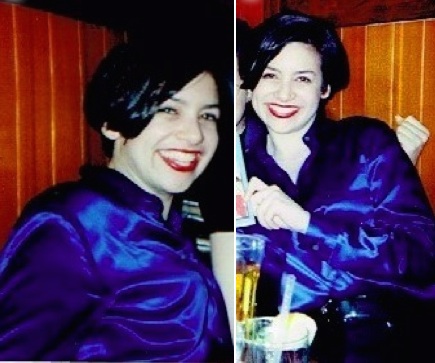 I still wear favorite tops obsessively. Check out how many times the Damien Hirst skull t-shirt I got in 2012 has appeared on the blog. And I’ve worn it many other times without taking a picture of it. I even got a sleeveless backup t-shirt, which is a good thing because the original t-shirt is starting to disintegrate.

Madonna would probably give me this look if she knew how repetitive I am.

The Madonna-Courtney moment was included by Rolling Stone in a compilation of 31 outrageous VMA clips here. I’m proud to say I was there in person for seven of them: anything that took place in 1999 through 2003.

For more VMA-related reading, I posted photos of my VMA attendance souvenirs last year. And Miley Cyrus’s notorious twerking performance last year inspired me to investigate the effect of time on our memories of outrage for the Huffington Post. While I was doing that, I found some good information on the initial reaction to Madonna’s 1984 VMAs performance.

You might also like
Balmain Vs Nasty Gal; Billboard Music Awards
Back to the '80s With Jessie's Girl
Throwback Thursday: My Oldest Friend & Outfit Inspiration
Previous Post: « The Week in Review, Featuring Rihanna and Eminem
Next Post: My Best Dressed at the Emmys: Woody and Matthew »