According to the zodiac calendar, Taurus birthdays begin on April 20, making this the perfect month for the official blog debut of my Bull and Bullfighter Maneater ring. 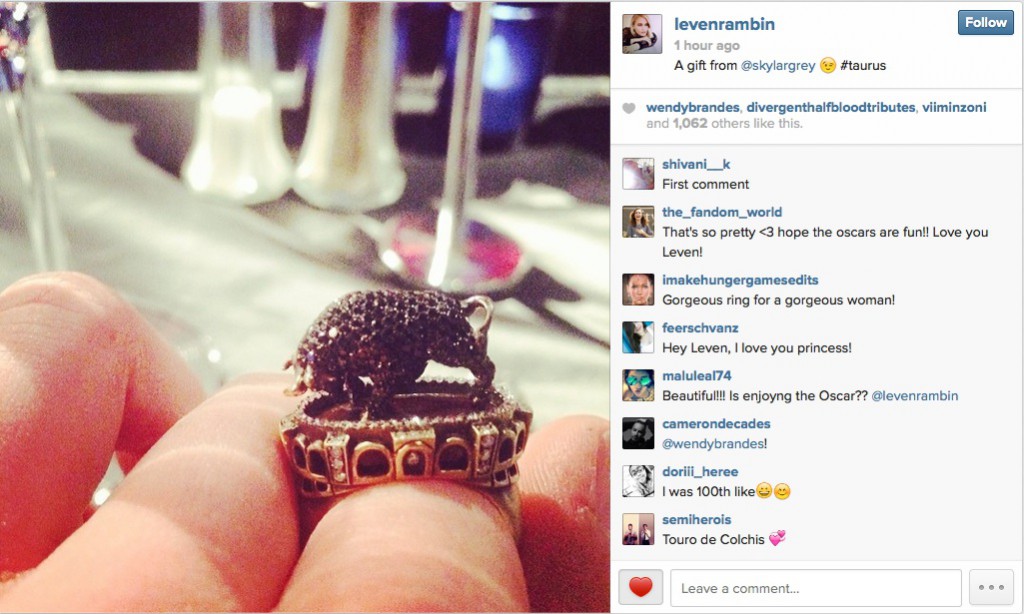 Leven had borrowed it from gorgeous singer/songwriter Skylar Grey, who was the official wearer of the ring that night. 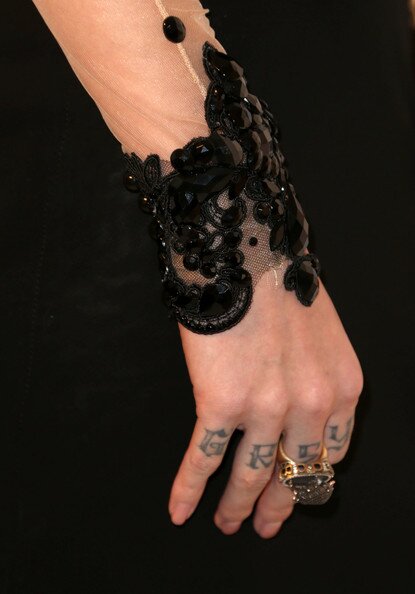 Skylar wore the ring with a Galia Lahav gown and earrings by Samantha Wills. 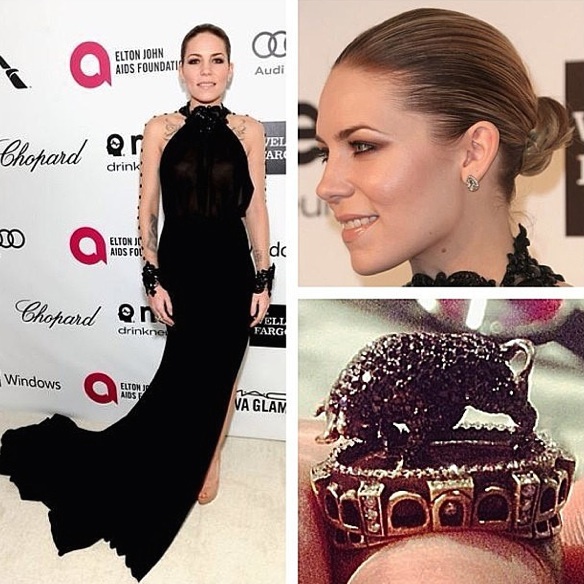 This is the fourth of eight rings I’m planning for my Maneater series. The rings are inspired by my lifelong interest in powerful women. My signature Wendy Brandes jewelry line started with pieces that were named after real-life bad-ass women, including the warrior queen Xenobia and the 12th-century Empress Matilda. A lot of these strong women have been called “dragon lady” or “man eater” in pejorative ways. A tough man is just a guy doing his job, but there always has to be some kind of mean-sounding name for a tough woman, right? I got to thinking that some of these wimmins might have relished being called these names. I’m sure 7th-century Empress Wu would have been like, “Ha ha ha! Dragon lady! YOU’RE RIGHT!” before she executed the guy who spoke those words.

Accordingly, each Maneater ring has a triumphant animal on top and a man tucked away inside the band. I loved the way Jennifer Heebner, senior editor of jewelry trade publication JCK Magazine, described this in a blog post last June:

“The hidden companions, meanwhile, are masterfully captured in diminutive forms, with no choice but to await viewing from wearers by way of their subservient posts … “

Jennifer was writing about my first three Maneater designs: the Frog and the Prince, the Lion and the Hunter and Jonah and the Whale. The  Bull and the Bullfighter was still a work in progress at that time. It started with a very rough sketch that focused on what I might be able to do with the ring’s band, which would represent the stadium. I wanted to show the seats and everything. My bull was just a tiny black blotch on the stadium floor. 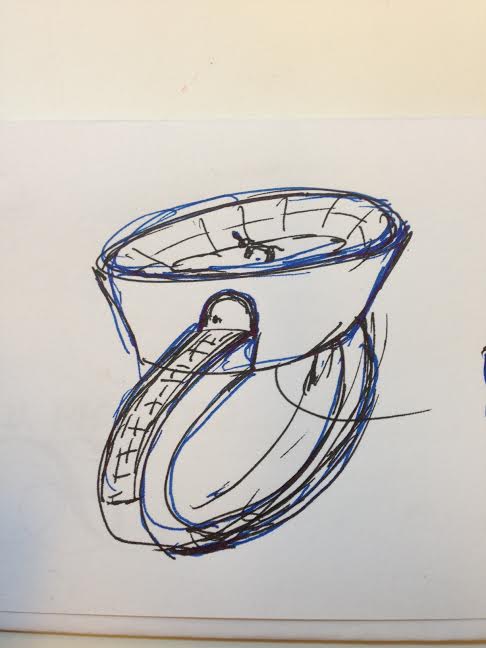 I quickly realized the bull needed to be central, as shown in this later sketch. 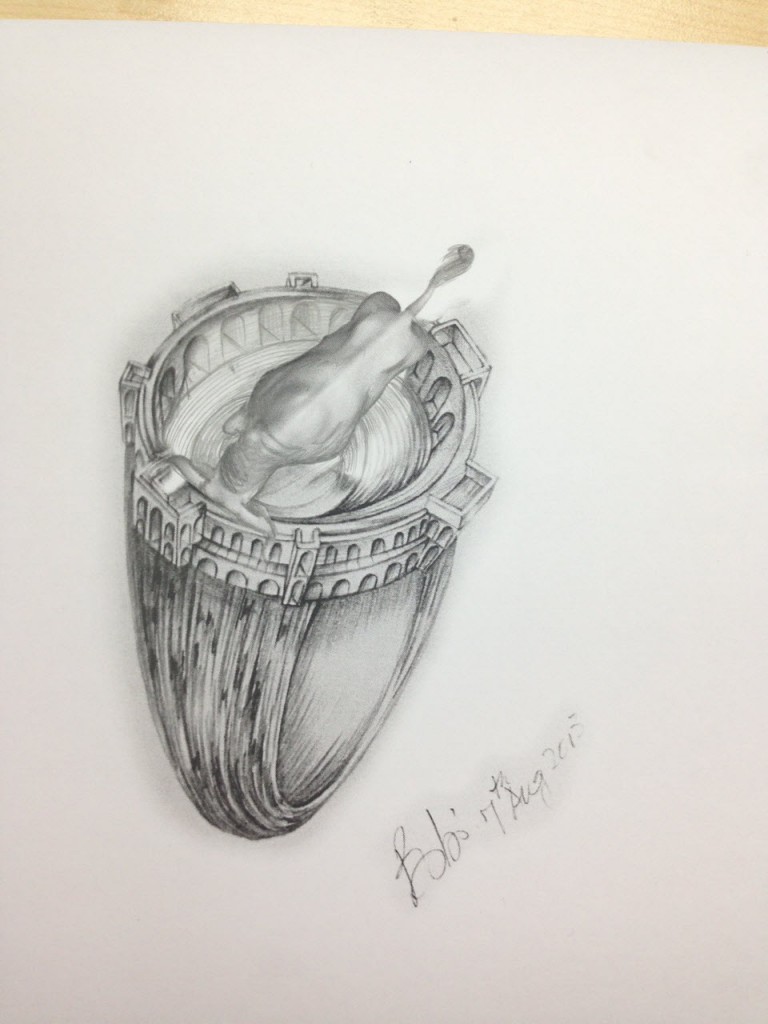 The matador was sketched separately. 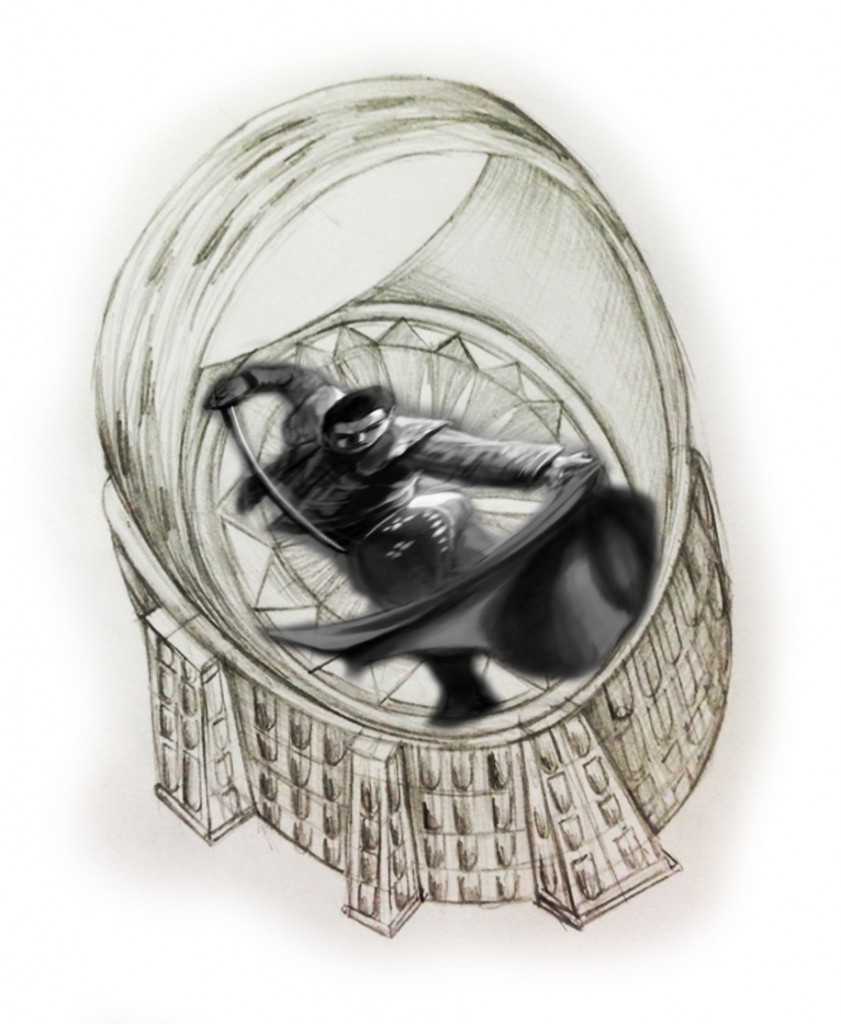 A sketch of the underside of the ring.

I gave these sketches to a model maker who hand-carved the bull, the stadium and the matador in hard wax. These wax models were later melted down to make molds in what’s called “lost-wax casting.” I previously explained that process here. 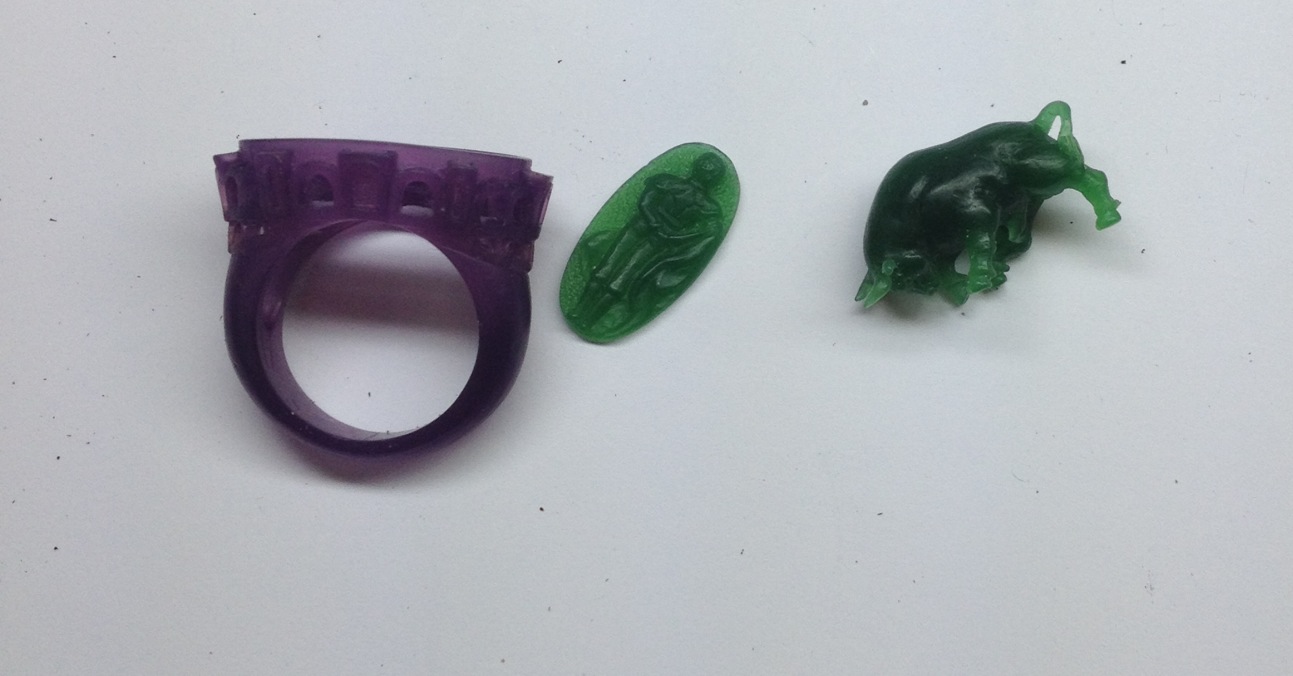 The wax models never come out exactly like the type of inspirational sketch shown here. You can draw absolutely anything on paper when you’re not taking into account the properties of the materials you’re going to use for the smaller, three-dimensional version of the design. When I want to have models match a sketch perfectly, I do a technical drawing, which would account for what is physically possible in both wax and metal. It would also have all the measurements, down to fractions of a millimeter. I’ve done technical drawings for designs, but usually I like to allow for a bit of spontaneity.  In this case, I went with a bullfighter who is standing with his back to the viewer, his cape swirling in front of him. It wasn’t realistic to get in all the facial detail from the original sketch and even if I could do it, it would be so small no one would be able to appreciate it. (You can read more about sketches and technical drawings here.)

I figured my time was better spent on more meaningful tasks, such as the setting of the 429 diamonds used in this piece. The bull, which is made of 18K rose gold, is adorned with 350 black diamonds. Before the setter started working on the real gold bull, he practiced the layout on a silver model that was created from that lost-wax casting mold. For complicated designs like this, I often do a silver model as an intermediate step between the wax and the gold in order to make refinements to the design that can’t be done in wax. Another benefit of a silver model is the opportunity to play around with the layout of the stones — marking the spaces with pen and then drilling. I always keep that model for future use. Once the places for gems are figured out, the gold piece can be drilled and the stones set. 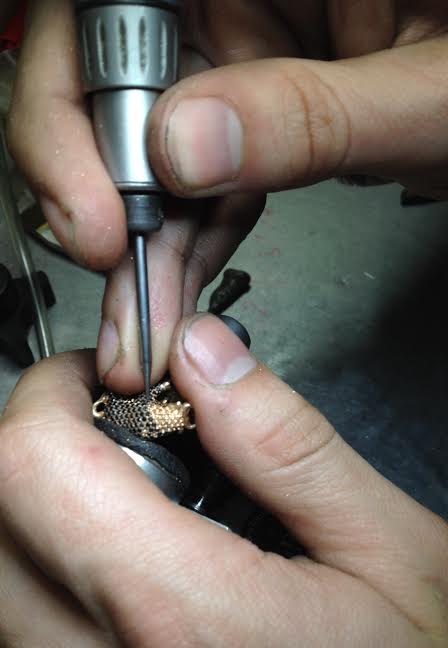 The setting work in progress.

The black diamonds I used are very tiny: 0.8 millimeters to 1.2 millimeters in diameter. I can’t say the gem setters enjoy this type of work! It’s quite tedious to set hundreds of miniscule stones. The setters have to use loupes and microscopes so they can see what they’re doing.

The 79 white diamonds set in the 18K yellow gold stadium/ring shank are the same size as the black diamonds. 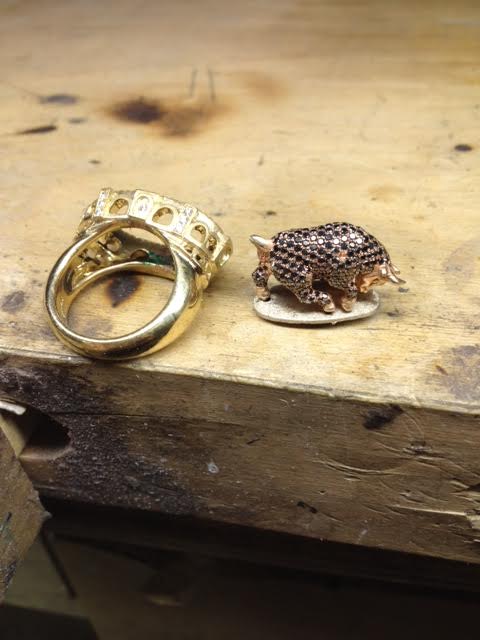 The bull is almost finished here.

The white diamonds at the top of the ring, surrounding the stadium, are set upside-down to give the building an intimidating, spiky look. Here is the top view of the finished ring. 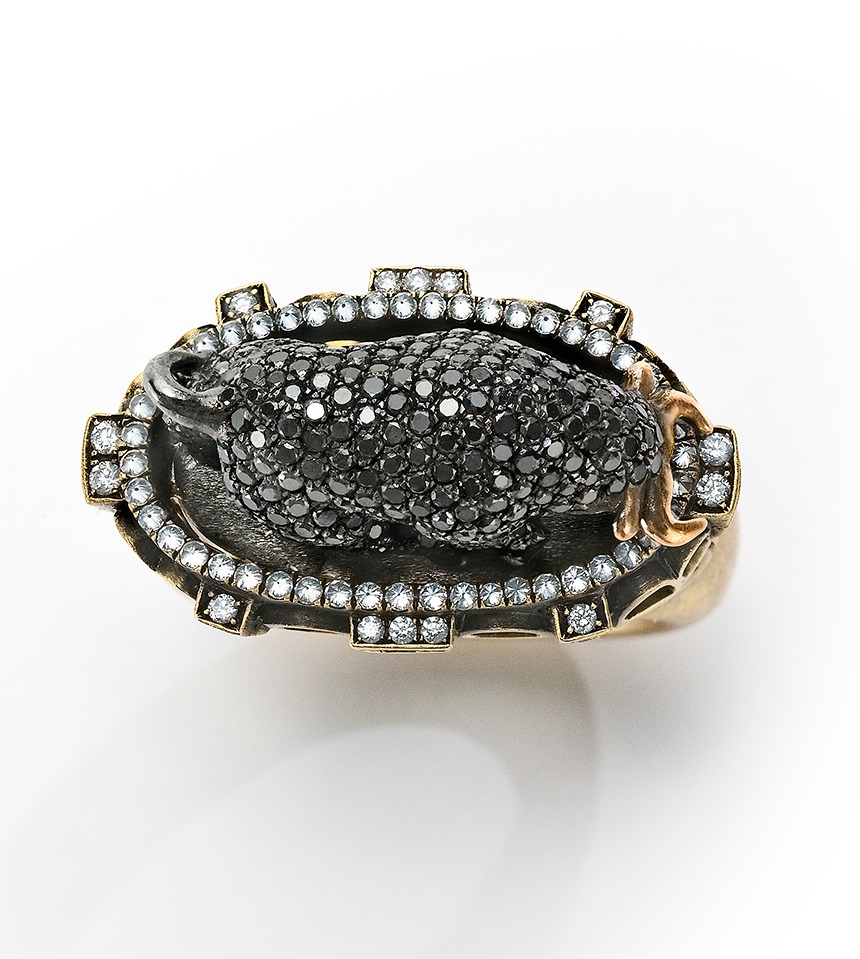 Here is the bullfighter, portrayed in 18K white gold. 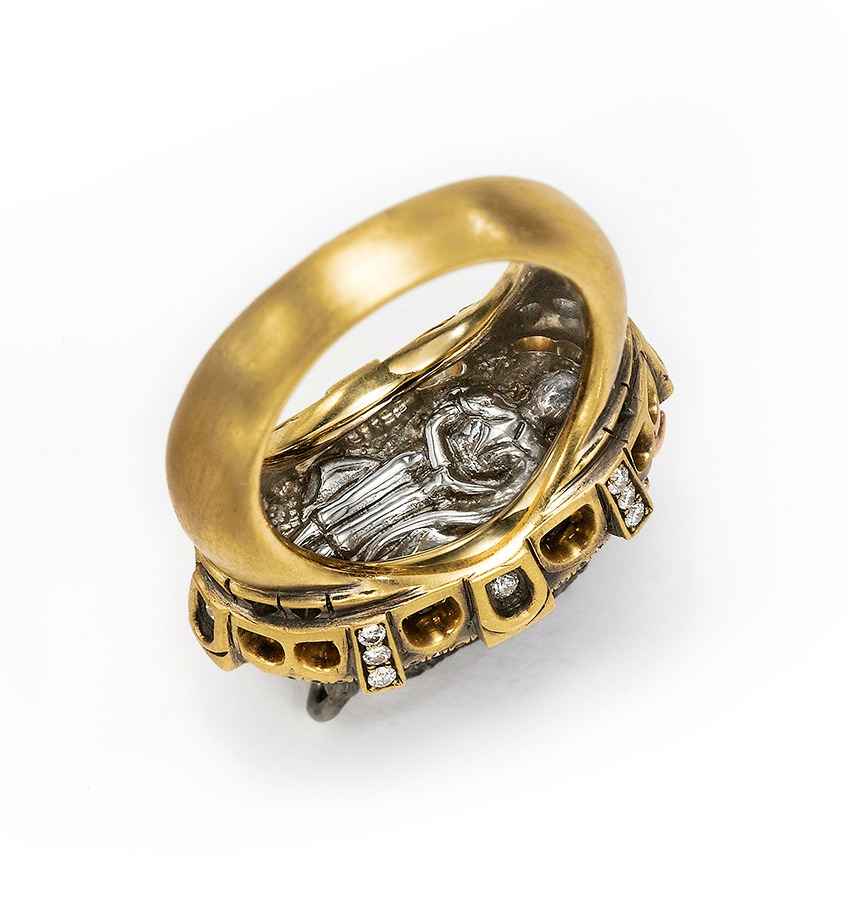 And here is the first side-view photo of my finished ring. Well, I thought it was finished. 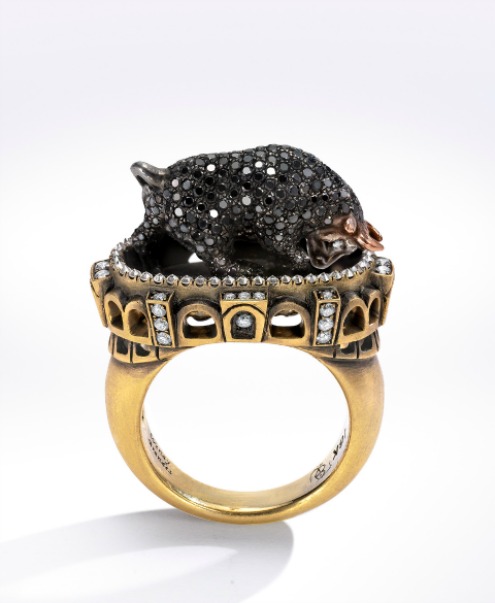 I had studied the ring intently before I sent it to the photographer. Then I studied the photo alongside the ring … for days. I had the urge to make a change, but one thing you don’t want to do with a time-consuming and expensive design is make any changes after completion. This ring was, indeed, very time-consuming and expensive to produce. The gold alone weighs a hefty 25 grams (there are 31.10 grams in an ounce of gold). I had multiple people working on the piece: a sketcher; a wax carver; a gem setter; and my main jeweler who supervised everyone else, assembled and finished the piece under my direction. I purchased a lot of diamonds, weighing 1.85 carats in all — 1.48 carats of black diamonds and 0.37 carats of white diamonds.  Setting work of this quality can cost $10 a stone or more in New York City, and, like I said, I used 429 stones. That’s a minimum of a $4,290 cost to me just for setting the stones in the metal. (The figure excludes the cost of the diamonds themselves and all other work. You can read more about gem-setting here.) Still, a certain dissatisfaction nagged at me. My very first sketch of the ring had been all about having the bull inside the stadium and the finished ring still reflected that. Now I felt that the design didn’t give the bull his due and that he should be astride the stadium. I finally broke the bad news to my jeweler: He was going to have to take apart the three main metal pieces — the bull, the bullfighter and the stadium — and reposition them. “I’m not sure how I’m going to do this,” he said. “You’ll figure it out,” I replied. He did and I’m glad I took that last, crazy step. To see the ring in all its glory, you definitely need to enlarge this photo by the wonderful Ed Parrinello of SquareMoose. 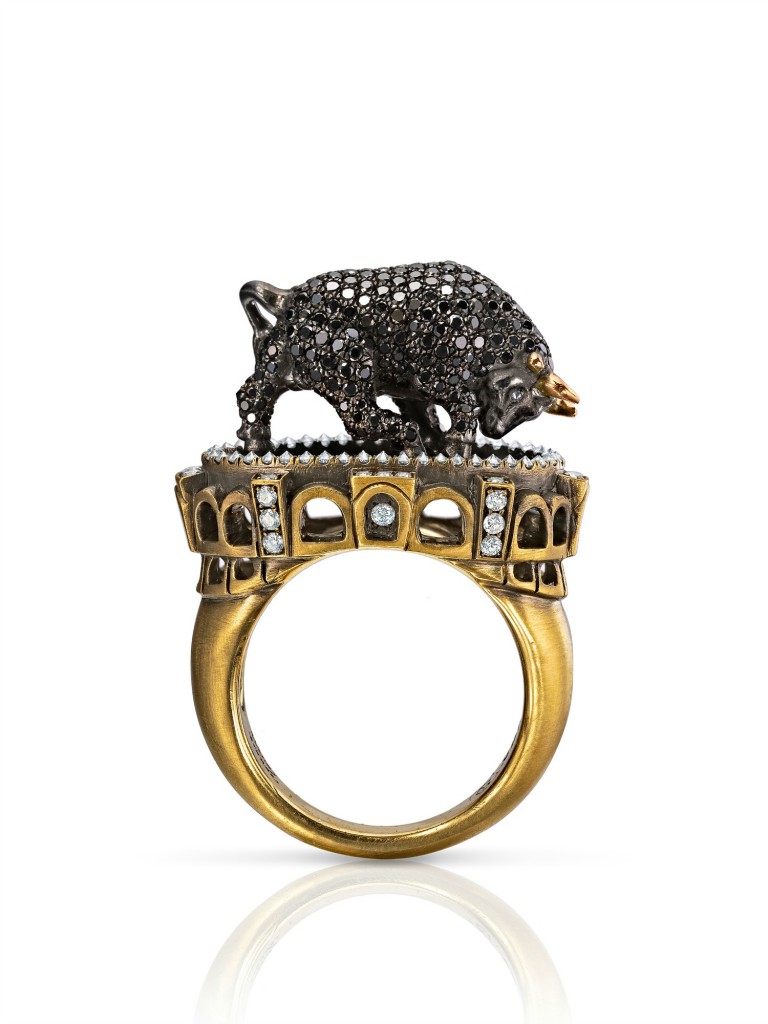 I’ve said before that I want to make designs that are museum-worthy and I feel that this is my best effort yet. The Bull and Bullfighter ring is for someone who wants wearable art, but it’s not only about personal adornment. To quote Paloma Picasso, “Jewelry must serve a purpose and I think that purpose is empowerment.” I’m confident this ring achieves that. This is a special piece and, as such, can’t be purchased directly from my website. If you’re seriously interested and have about $30,000 to spend, email me at wbjewelry at hotmail dot com.

The Bull and Bullfighter ring has already appeared in the March 2014 issue of JCK Magazine. Jennifer Heebner followed up her blog post on the first three Maneaters with a print story that focused on this particular piece. And guess what? I told her what the last four Maneater designs will be. Read her article to find out what those are.

CLICK HERE TO TO READ THE JCK MAGAZINE ARTICLE.

You might also like
Jewel of the Month: Freudian Links
A New Venture
Congratulations Are in Order
Previous Post: « No Fooling! I Have Emoji Rings Now.
Next Post: Throwback Thursday: Wearing Vintage in Dublin in 1997 »