With ’80s designer clothing on my mind after yesterday’s post, I figured this was a good day to share a photo from the July 4th holiday in 1986, during which the 100th anniversary of the Statue of Liberty was celebrated. As I recall, my family’s initial reaction to the plans for the huge celebration was the typical, “We must avoid the city. It will be overrun by tourists.” But then we got swept up in the excitement and went in and played tourist ourselves, right down to what the New York Times described as “those souvenir green foam-rubber hats that allowed each and every tourist to turn his head into liberty’s crown.” Unfortunately, my torch-shaped Liberty flashlight didn’t make it into this picture.

I think my t-shirt — which reads “Soho” — was from Foravi. More importantly, my linen vest was from Parachute (bought on sale). Parachute was a big deal then. How big a deal? Big enough for it to be worn on Miami Vice and for Bret Easton Ellis to namecheck it in his 1985 novel about Los Angeles rich-kid ennui, Less Than Zero:

“Rip’s wearing this thick, bulky white outfit he probably bought at Parachute, and an expensive black fedora, and Trent asks Rip, as he makes his way toward me, if he’s been going parachuting. ‘Going Parachuting? Get it?’ Trent says, giggling. Rip just stares at Trent until Trent stops giggling.”

Parachute opened its first store in 1980 in Soho. Four years later, the New York Times wrote about that location:

“It occupies a vast space that used to be a cardboard factory at 121 Wooster Street, between Prince Street and Spring Street. Clothes hang from pipe racks and a row of white pillars separates the men’s from the women’s clothes – a boundary that is frequently crossed.”

We were seriously into androgyny in the ’80s. Girls wearing boys’ clothes! Boys wearing girls’ clothes! Anarchy! Anyway, by 1984, when the Times wrote that story, Parachute had an uptown store on Columbus Avenue as well as stores in Chicago, Los Angeles, Toronto and Bal Harbour, Fla. (I would have gotten my vest from the Soho store though. Soho was special to me, as you can tell from my t-shirt.) The following year, the Los Angeles Times described Parachute as a “fashion empire with an annual retail volume of $27 million” — big money in 1985! I need to do some more research into what happened to the empire. There’s a website that announces that “the design team of Harry Parnass and Nicola Pelly is launching the respected PARACHUTE brand as a world-wide licensing and franchising enterprise.” And I see Parnass, who described the Parachute designs has “urban armor,” has done some consulting. Maybe the oversize look was too typically ’80s to survive the decade. Nicola Pelly described Parachute’s style to the Chicago Tribune this way:

“Our clothes are for people with a strong personality and who like challenges, not for wilting violets. We have big shoulders, narrow waists, long skirts or very short skirts — nothing in between. They’re for people who want to make a strong statement.”

Elle’s creative director, Joe Zee, is apparently still scarred by being mocked for wearing Parachute’s mustard-colored harem pants, but he should be proud! Several Parachute items are now in the collection of the Metropolitan Museum of Art. Admittedly, I’d pass on the baggy linen trousers, but I’d be happy to wear this bomber jacket now. 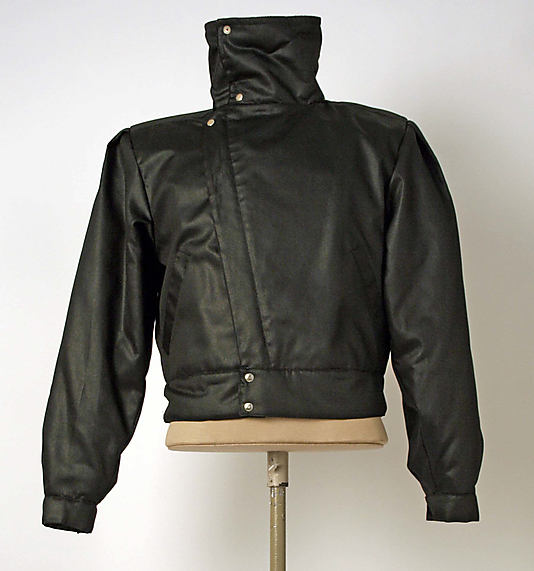 Parachute bomber jacket, circa 1981. Image from the Metropolitan Museum of Art. Click for more.

A blogger/fashion-business owner named Lynne Godfrey had an impressive collection of Parachute items back in the day. Check out her post for more looks. (I’m also thrilled to see her wearing one of my favorites, Stephen Sprouse, in these photos.)

The most exciting thing about my 1986 photo for me is the appearance of my black rubber Maripolitan earrings. I often wore just one, as in a picture in this post, but I went for the symmetrical look for Lady Liberty’s celebration. At that point, I’d already lost my 80 rubber Maripolitan bangles (the ones Madonna wore!) while moving my stuff back to New Jersey after my freshman year of college at Northwestern University in Evanston, Ill., so the earrings were what was left of my rubber jewelry collection. Now I no longer have the earrings … but I do have an enduring obsession with rubber jewelry.