MrB keeps asking me, “Who’s your hero?” So far, he’s refrained from answering his own question by indicating himself with both thumbs and saying, “This guy!” 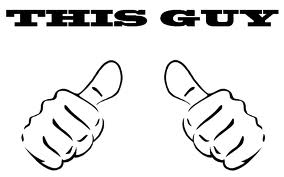 That shows how nice he is because he is entitled to do the thumb thing after getting us tickets to attend watch-company G-Shock’s 30th anniversary party in New York City last night– the “Shock the World” event featuring a performance by Eminem that I got to see from the front row. 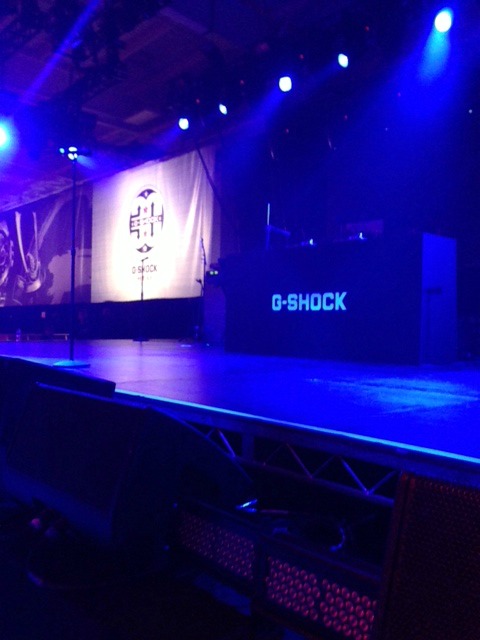 This photo taken before the concert shows where I was standing.

Opening for Eminem was my best friend, the rapper Yelawolf. Yelawolf and I haven’t ever exchanged a single word, but I feel like he’s my best friend because I fought my way through a nor’easter to see him perform in Brooklyn last November. I am normally too lazy to go to any location (besides easy-to-get-to Barclays Center) in Brooklyn on even the most pleasant days. However, I battled snow, wind and a broken-down subway system to see Yela. It seems like the kind of thing I’d only do for a very dear friend. Ergo, Yela and I must be BFFs.

Unfortunately, despite my excellent vantage point at the G-Shock event, I didn’t get good photos of BFF Yelawolf. Something about his stage lighting didn’t agree with either my iPhone camera or my regular camera. This is unfortunate because Yela was killing it from a fashion perspective. (He put on a great show as well; MrB was full of praise for him afterwards.) He’s got a new ‘do that’s kind of shaved but mullet-y. It’s a little bit People of Walmart and a little bit old-school punk … it’s country-punk! I like it. I also appreciated his “Gangster rap made me do it” t-shirt; American flag sunglasses; sneakers emblazoned with his Slumerican record label name; and belt stamped with the words “Holy Bible” (in other words, a true Bible Belt). I’m still looking through photos but I think this is the best I got of him. 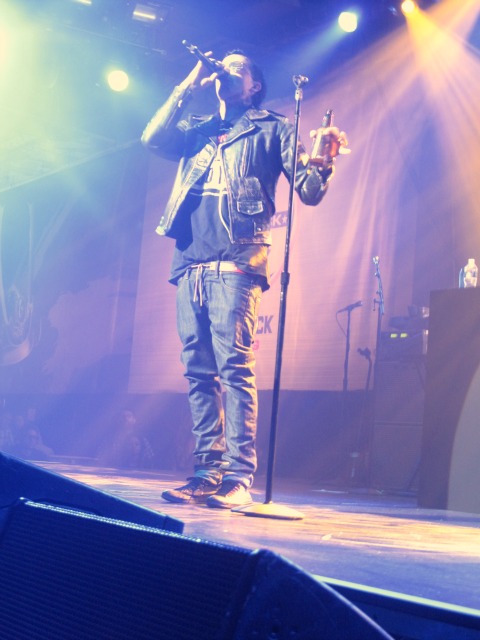 I could have used a sip of his beer right then. It was hot where I was standing.

The next time he and I hang out on a stormy evening in Brooklyn, I’ll ask him to pose for a better photo.

I had more luck photographing Eminem. A lot of people were hoping Eminem would introduce new music from the album that’s supposed to be coming out this year, but he stuck to his classics. New work would have been thrilling, but I was fine with the set that was performed, though it would have been nice if the vocals were more audible. So many of the shows I go to lately seem to have the vocals drowned out by the music … or I maybe I can’t hear the voices because I’m going deaf from listening to loud music on headphones, just like my parents said I would. (They warned me I would ruin my eyes by reading in the dark too. So far, I can still see.) Anyway, Em started off with “Won’t Back Down,” the same as he did when I saw him at Lollapalooza in 2011.

Even though I was up front at Lollapalooza, last night’s front row was much, much closer to the stage, so the view was incredible. I could see every expression on Eminem’s face and he seemed engaged and energetic.

These are my two favorite photos from the performance, taken as Eminem plucked at a guitar. I like the look on his face and guitarist Curt Chambers‘s face, as well as their body language. 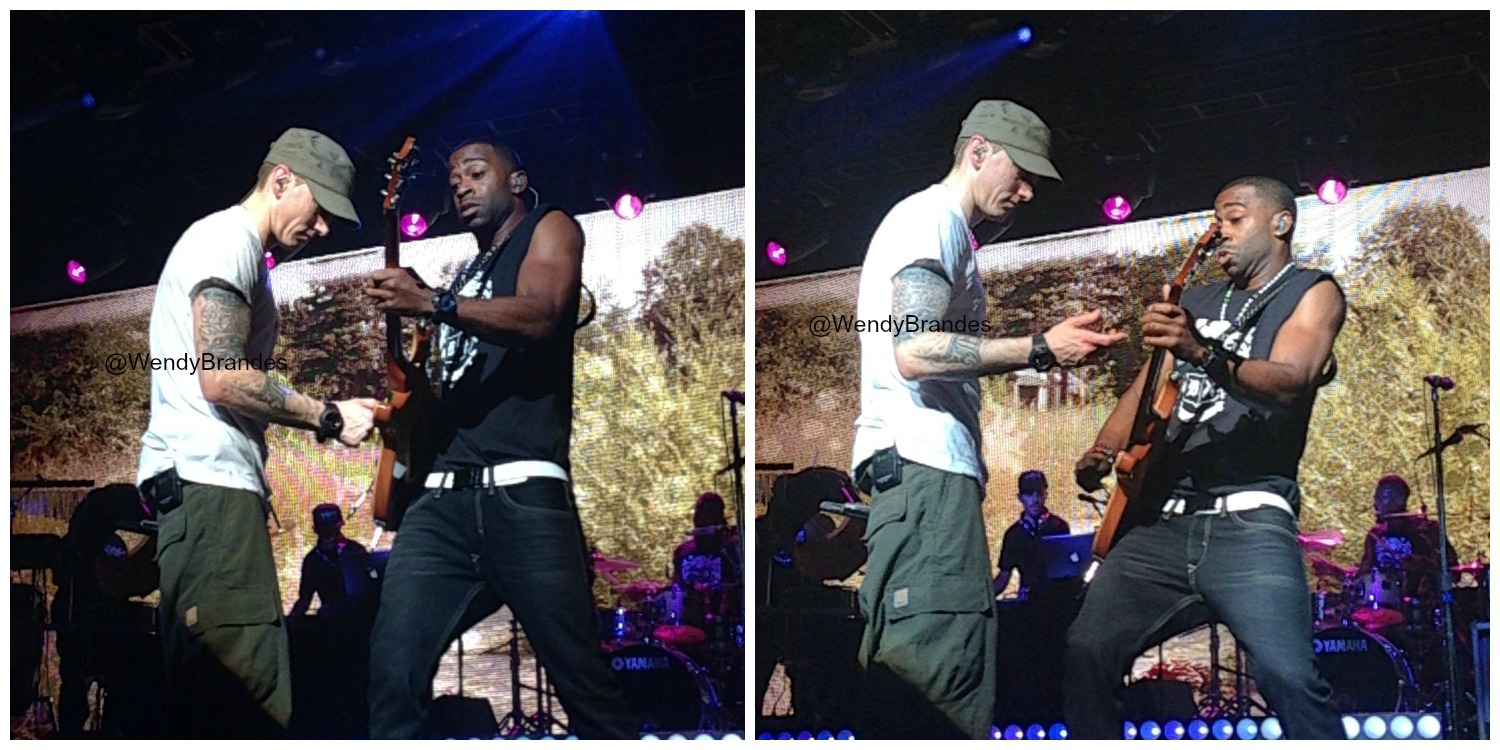 Here’s another photo that’s quite sharp. 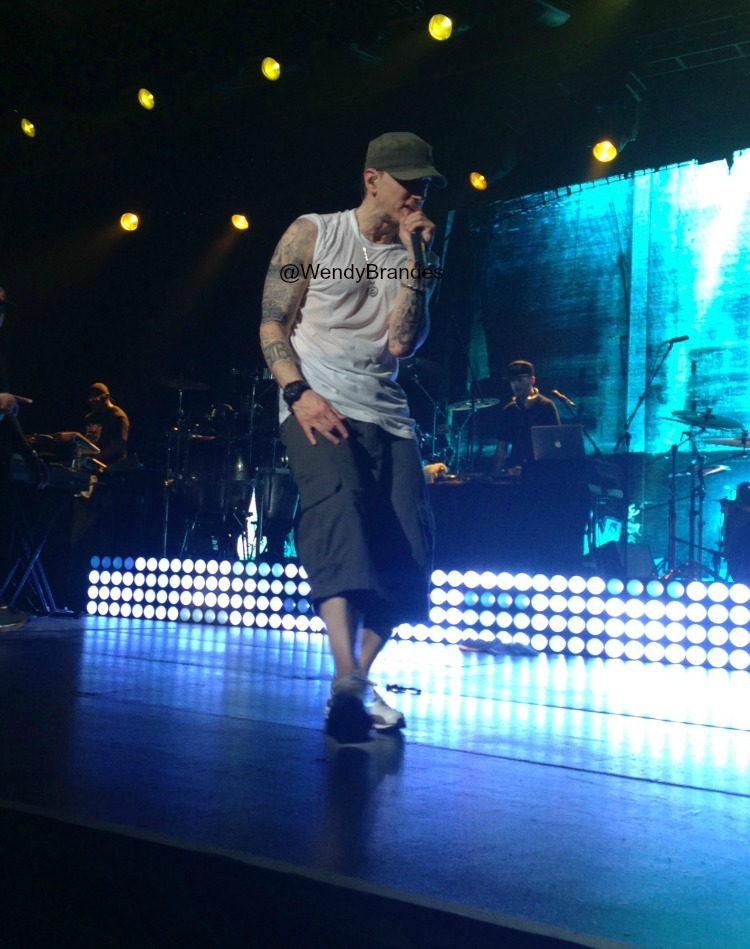 Between Yela and Em’s set, I flashed back to Lollapalooza in a non-musical but highlarious way. At Lolla, my sister, Terri Berry, and I overheard an annoying 14-year-old boy loudly proclaim that the “old people” would probably leave after Big Audio Dynamite performed and before Eminem came on. After a looong moment, we realized that we were the old people! DAFUQ?! I thought I was as young as the music I feel! (Especially when the rapper I’m there to see is much closer to my age than 14.) Well, you know that once you get old, you get ornery too, so that punk-ass little boy never achieved his dream of pushing us out of our spots. In fact, we shooed him away from our section entirely. Begone, varlet!

Last night’s special brat was the chick on my right who kept jostling for space with MrB. I heard her bray something about people bringing their moms and dads to the show. A while later, I heard her repeat her complaint and elaborate on it, making it clear that the mom in question was the one belonging to the girl to my left. After a looong moment, it dawned on me that the “dad” in question was MrB. With our 25-year age difference, MrB and I are used to and amused by such comments, so I turned to my right, smiled and said, “That’s my husband.” “That’s not your father?” she asked. “Nope, my husband,” I said. “So he just looks like your father,” she said, trying to be nasty. “Yep!” I answered cheerfully. I didn’t hear any shit from her the rest of the night, nor did she get any of MrB’s space. “I might be old,” he said to me, “but I’m still stronger than her!” Ha! 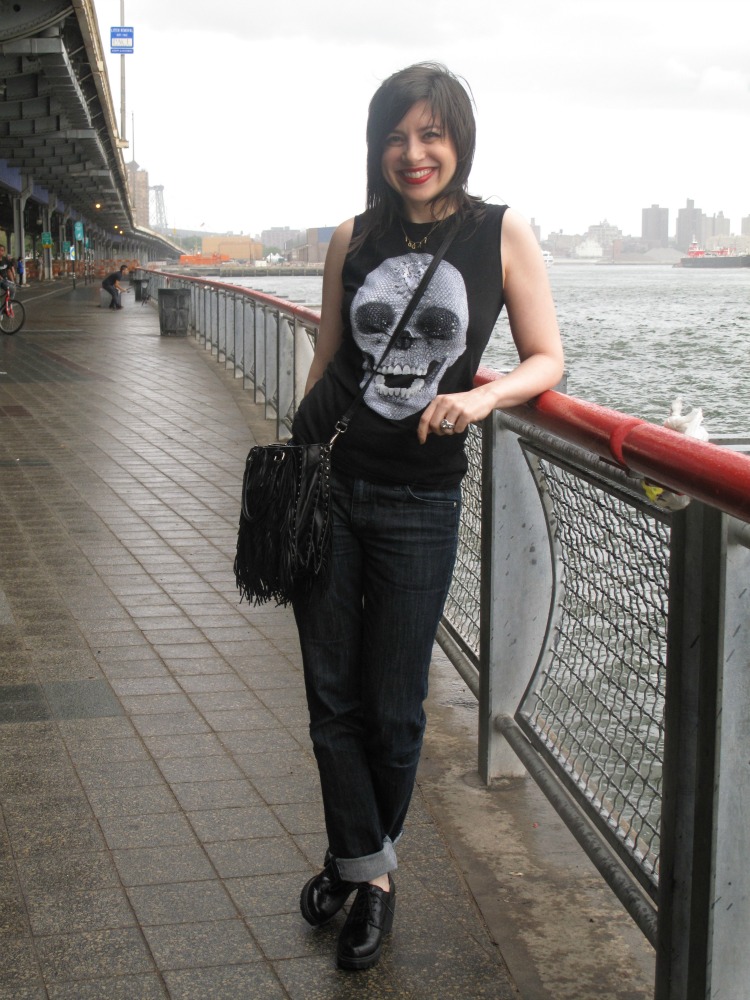 … and here’s how I looked in a much sweatier state after midnight. 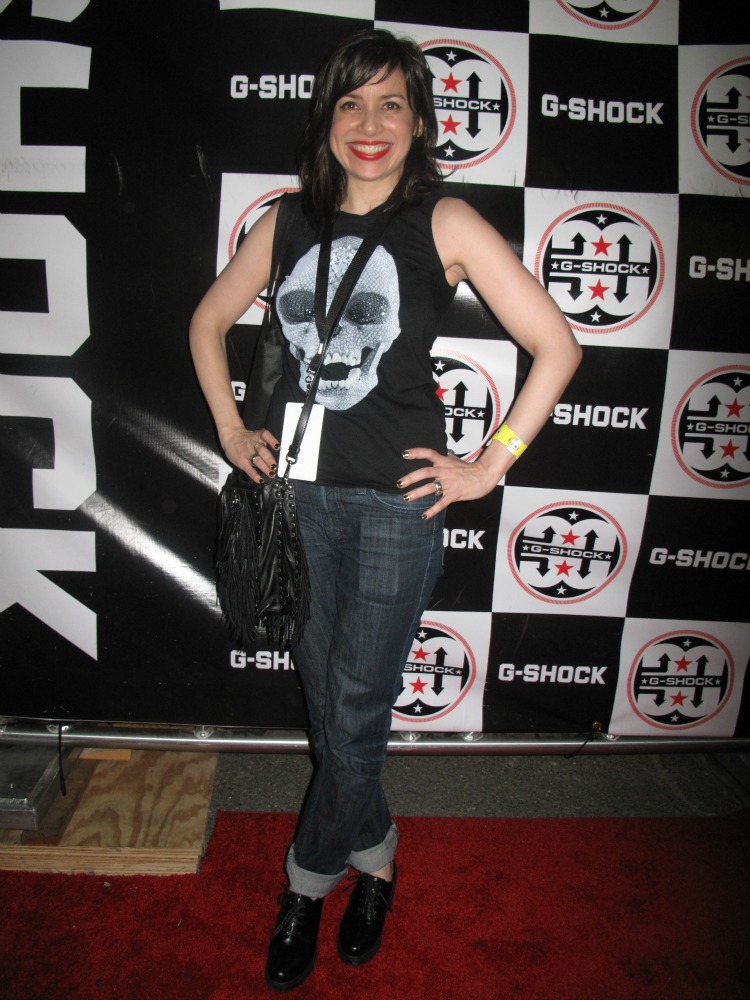 It was an amazing night. Thanks to MrB for (a) being my ticket hero and (b) not giving that girl any wiggle room, and to G-Shock for putting on a great event and giving us all watches. Shoutouts to Eminem’s gorgeous backup singer Sky Heavens, who you can follow on Twitter at @SkyHeavensXO; keyboard player Erskine Hawkins, who tweets as @ErskineHawkins aka the Key of E; and drummer Devin Webster, who very rarely tweets as @DWebstar86. Devin is also Skylar Grey’s drummer and Stacy Lomman and I chatted with him after Skylar’s show last month, so it was nice to say hello to him again!

UPDATED TO ADD: There are some video clips here with much better sound quality than mine.

UPDATED AGAIN TO ADD: Yelawolf is helping me out with my fashion coverage! He posted a photo of the Bible belt on his Instagram, saying he and Eminem had both signed it. Apparently he’s planning some kind of New York scavenger hunt for it. Click his photo below to read more. 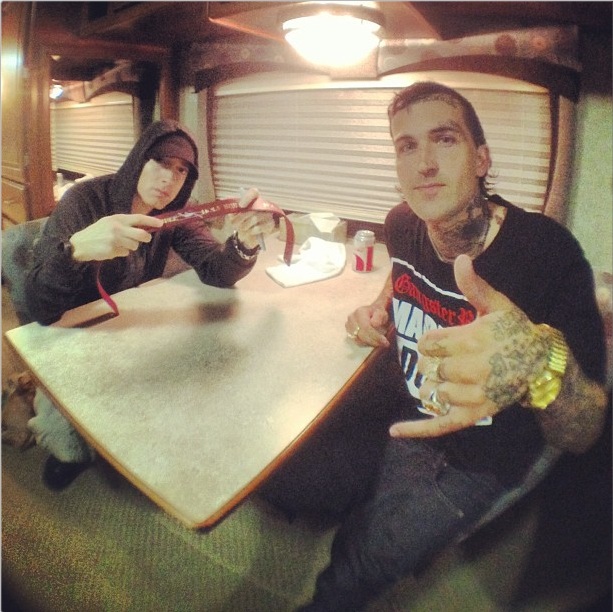 Speaking of fashion, Eminem wore his hat low over his eyes through nearly the entire performance. He pushed it back for a couple of moments and while I didn’t get a clear photo, someone else did. See it here.

UPDATED YET AGAIN TO ADD: Rolling Stone wrote about the show here. I particularly like (and agree with) this paragraph:

“Eminem’s had a lot of ups, a lot of downs and a bunch of drugs in between. The youthful exuberance of the TRL years has long disappeared behind his eyes. To watch him on TV is often to see a man who would rather not be on TV. But last night, he threw his body fully into the experience, practically choking on the microphone to give it more sound. His back muscles rippled his white tee and his neck bulged, always straining for more, more, more. It was a purely compulsive performance.”