I took a day off yesterday from reading about crazy New York City mayoral candidate Anthony Weiner and his wife Huma Abedin, but I was forced to acknowledge the freaky couple again this morning while I was reading the New York Times (in print, of course!). 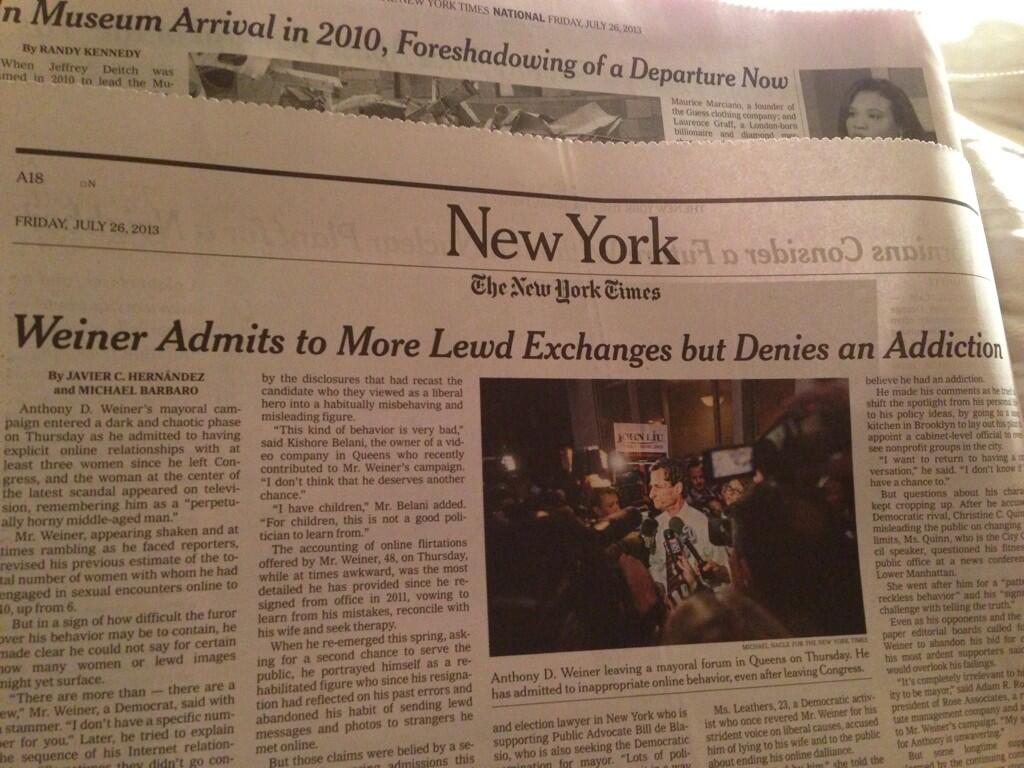 Oh! Instead of sexting with just one woman a year after he was forced to resign from Congress for the same behavior, (which he admitted in a press conference on Tuesday), he actually sexted with at least three.  And the first sexting partner — Sydney Elaine Leathers — was hearing from him daily after Weiner and Abedin sat for an interview with People magazine in which Abedin said, “Anthony has spent every day since [the scandal] trying to be the best dad and husband he can be.”

My skin is crawling because this scenario reminds me of a disturbed person I used to know who was so self-destructive that I could give a ridiculous, 25-step, Rube Goldberg-worthy warning  — “Whatever you do, don’t turn the hand-powered generator, allow the motor to lift the dog house, allow the dog to walk out, trigger the mousetrap, spin the gears, etc. … if you do those 25 things, I will never speak to you again” — and that’s exactly what this borderline personality would do, always within weeks of agreeing not to do it.  The “don’t do this” instruction was so specific and complex that a normal human could never do it accidentally. The normal human would need a checklist to make sure to hit every part of the process, but the borderline personality would breeze through it and then act like I was the crazy one for being upset.

Weiner didn’t have a 25-step process to avoid but it was still an extremely specific “don’t”:  “Don’t sext with young women online because you are guaranteed to be caught.”  And that’s what he did. Seriously, he couldn’t shake things up and go have a regular affair? He had to do EXACTLY what had brought him down already? That’s some weird compulsion shit.  I don’t know if Weiner is an addict or has a personality disorder or what, but my hunch is that he needs to spend 24 hours a day for the rest of his life trying to fix himself and that doesn’t leave much time for him to be mayor.

Meanwhile, everyone is analyzing his wife, Abedin, and talking about whether she should leave Weiner or stay with him, as well as her reasons for doing one or the other. I don’t care! If she wants to, she can spend the rest of her life with a guy who appears to have no redeeming qualities whatsoever. That’s her personal decision/problem. I just want him — and her — off my television and out of my newspaper and far, far away from the mayor’s office. They’re giving me post-traumatic stress and flashbacks to my own brush with insanity. Plus, in a city of over eight million, I know there are people with better leadership qualities than Weiner. Hell, there are cats with better leadership qualities than him, and cats generally suck at leading. Let Weiner and Abedin lead their lives of quiet desperation privately. Just go away, Anthony and Huma! As Blondie sang: “You spell, you read, D-O-O-R.”