It strikes with no warning. Every so often, I wake up with the jingle for the 1970s Tiffany Taylor doll stuck in my head. Tiffany’s gimmick was a rotating scalp with dual hair colors. White Tiffany could be changed from blonde to brunette; African-American Tiffany switched between auburn and black. 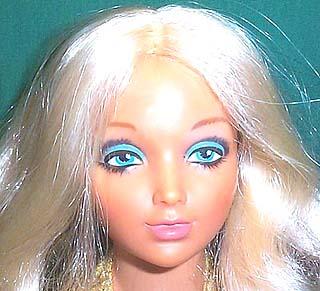 Tiffany on a blonde day. Click for photo source.

These dolls were produced by the Ideal Toy Company from 1974 to 1976. I have no idea why that theme song has stayed with me for nearly 40 years. Maybe it’s the wolf whistle. Go to :32 to hear it.

After you’re done with the Tiffany Taylor ad, go back to the beginning of the video to see the crazy ad for the anatomically correct Joey Stivic doll. The doll, also by Ideal, was based on the character Archie Bunker’s grandson on the television show All in the Family. I had no memory of this doll at all, but the show itself was a major part of my childhood. 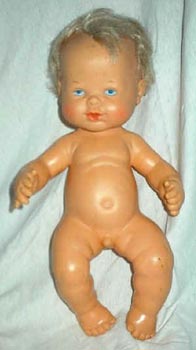 All in the Family is one of the greatest shows of all time (and if you disagree with me, STIFLE YOURSELF!). It was on from 1971 to 1979, as the nation debated the Equal Rights Amendment. The women’s lib movement hadn’t made much of an impact on my surroundings at that point. During my childhood, this riddle was popular.

“A father and his son were in a car accident. The father died. The son was taken to the hospital. The doctor came in and said: I can’t do surgery on him, because he’s my son. Who was the doctor?“

I remember being astounded that the answer was “his mother.” I didn’t know that women could be doctors; I thought they could only be nurses. All the sexist (and racist and other -ist) stuff that Archie said on All in the Family were things people said in real life, and that shit was scary. On the show, however, it was always clear that Archie’s bigotry was foolish. Even as malapropism-spewing Archie called his wife Edith a “dingbat” and told her to “stifle herself,” their liberated, smart and sex-ay daughter Gloria (“little girl,” as Archie often called her) was always standing up for herself and her mother and giving her father what for. I swear, All in the Family helped make me the feminist I am today. 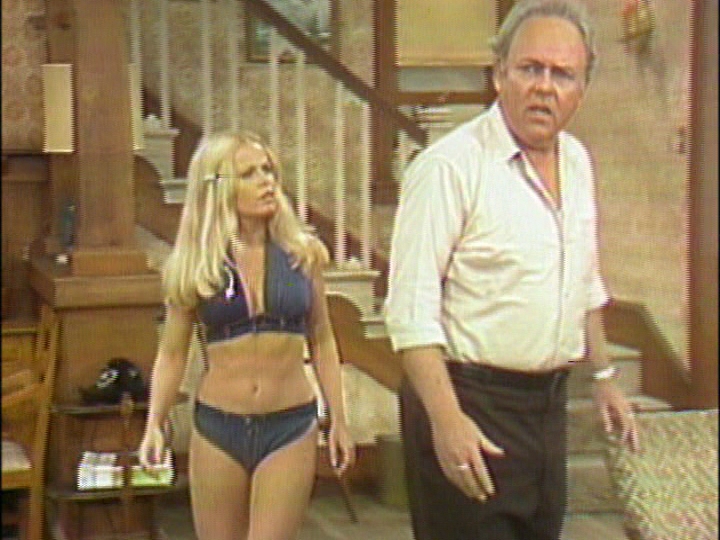 Considering how important the show was to me specifically and the culture at large — Archie’s chair is at the Smithsonian — it should be no surprise that the theme song, “Those Were the Days,” has stayed with me as long as the Tiffany Taylor song has. I have the lyrics memorized, including that tricky “Gee, our old LaSalle ran great” line.

The impact of All in the Family on me also explains my love for its cartoon reincarnation, Family Guy. Crazy, dumb, bigoted Peter Griffin is an over-the-top Archie, while Lois is Gloria 20 years down the road. And I am always amused by the All in the Family-inspired opening, with Peter and Lois sitting at a piano like Archie and Edith, singing about the simpler days of yore.

Gloria: Do you know that sixty percent of all deaths in America are caused by guns?
Archie Bunker: Would it make you feel any better, little girl, if they was pushed out of windows?

But Archie never got to say something like this.

I have to work “To the Hinden-Peter!” into conversation more often. I’ve already made “groinacologist” from All in the Family a normal part of my vocabulary.

You might also like
Just Dicking Around
Distressed About Leather, Plus the Week in Review
Kale Chip (Lightly Salted) and Quiet Sex
Previous Post: « Two Custom Necklaces in Sterling Silver
Next Post: What Wendy Wore: The Weinstein Company Pre-Oscar Party »