Here I am wearing a Versace top and skirt in 2004. 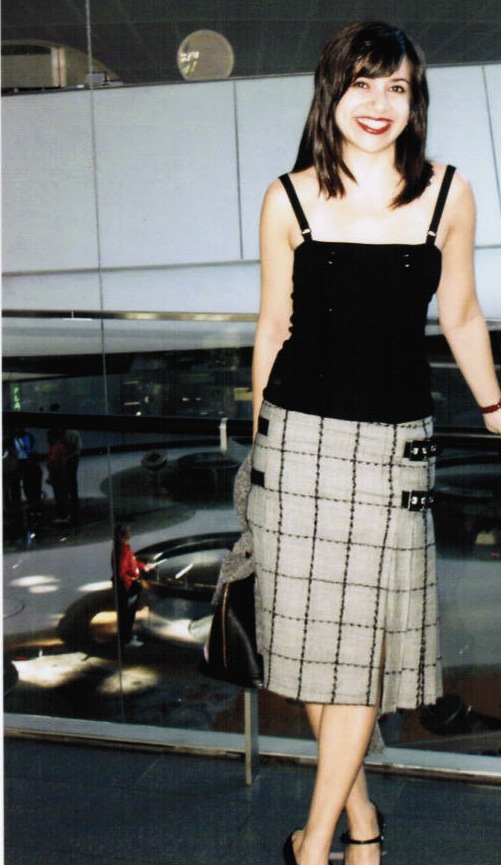 Here I am wearing the same top and skirt last week, while doing a modified Angelina Jolie leg-thrusting pose.

I’m carrying a Louis Vuitton bag from 2001 in both photos. In the earlier picture, I’m wearing patent Prada Mary Janes that I bought in 1994 or 1995.  (I got rid of those a few months ago; they were really decrepit after more than 15 years of frequent wear.) In the recent photo, I’m wearing Jil Sander boots that I bought in or before 2005. They’re still in good shape.

Clearly, my taste hasn’t changed much, but maybe I’ll buy a whole new wardrobe just for the hell of it when FitzRoy’s feline-supermodel career takes off.  One of his recent Tumblr photos has 1,700 notes as of this writing! (People don’t leave too many comments on Tumblr but the few that are left are hilarious, like “eyes as red as the devils dick!”) I’m looking forward to becoming a momager.

UPDATED TO ADD: I used to have a leopard-print toothbrush holder to match the leopard-print soap dish, but it broke a long time ago. FitzRoy wasn’t involved in that incident.

You might also like
What Wendy Wore: Stacy Lomman Jacket for Travel
Paris, Day 6: More Castelbajac
What Wendy Wore: Not Autumn Yet
Previous Post: « Torture by Vonage
Next Post: Distressed About Leather, Plus the Week in Review »