Friends who used to live in Hong Kong had their annual Chinese Mid-Autumn Festival party last Friday. The invitation encouraged Chinese attire. I don’t have anything authentically Chinese anymore (why on earth did I get rid of that padded silk jacket I got in Hong Kong in 1996?!) but I do have an Ossie Clark jacket with a Chinoiserie dragon print on it. As I dug the jacket out of my closet, I noticed a vintage jumpsuit that I bought from Shrimpton Couture several years ago. I had remembered it as having an abstract print, but upon examination, it turned out to have a Chinoiserie print as well! I figured I’d have to take the jacket off inside but I could wear the jumpsuit and stay on theme all night, so I opted for the jumpsuit.

I don’t think Cherie from Shrimpton Couture will mind if I say that the jumpsuit isn’t my most flattering outfit. She knows I got it because I was perversely attracted to the weirdness of its busy print, ’70s rec-room color palette and gaucho-style legs. On Friday, I wasn’t sure I was in the mood for “peculiar” rather than “pretty,” but then I remembered that gorgeous blogger Patti of Not Dead Yet Style would be hosting her “Visible Monday” link-sharing post. This jumpsuit is definitely visible, so this one’s for you, Patti. 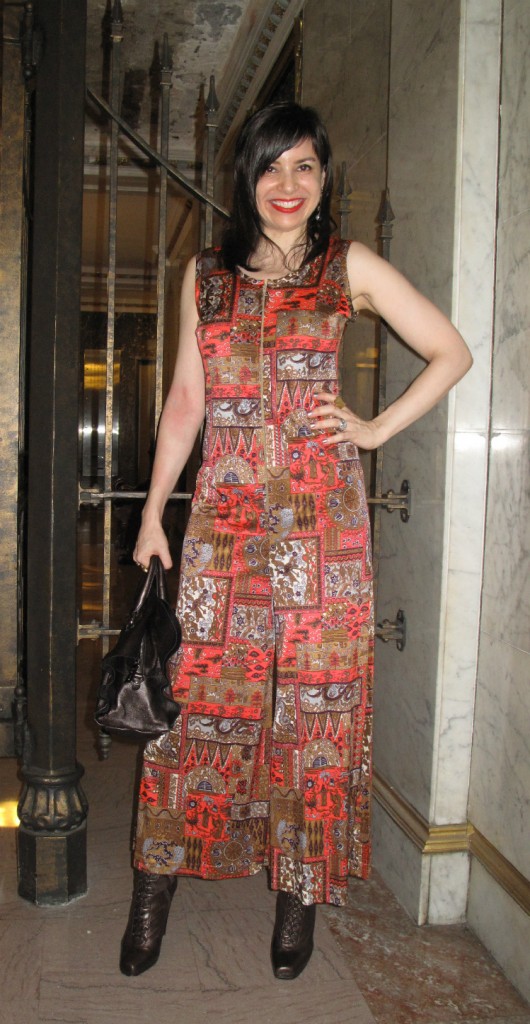 I am so ready for gauchos to come back! Look how they show off the boots. Love it. And don’t bother saying “never” to gauchos because Never Is the Next New Thing™.

I’ll take a picture of the Ossie Clark jacket next time I wear it. I didn’t get around to modeling it for the camera on Friday and today I get to be lazy because of Hurricane Sandy. Bad weather always justifies laziness.

You might also like
Throwback Thursday: Duran Duran, 1980s and Now
No Watanabe Jacket for Capricorns, Plus Simon Spurr News
10 Years Ago: Wearing Ossie Clark for Marc Jacobs
Previous Post: « Shontelle Is a Slayer
Next Post: Frankenstorm Sandy Status in the WendyB Household »