Topshop has announced a new designer collaboration. Not with me, sillies! Instead, the U.K.-based fast-fashion chain struck a deal with 27-year-old British designer J.W. Anderson. Apparently, he’s an up-and-comer, but he’s certainly not a Margiela, Lagerfeld or Versace as far as name recognition goes. The latter three designers/design houses have all worked with H&M, a fast-fashion retailer that favors the mind-blowingly famous. Topshop seems more willing to work with emerging designers such as Anderson, Mary Katranzou and Louise Gray. This interests me because I had been wondering if I was too obscure for Topshop and if that’s why the company knocked off my swear-ring design instead of asking me to collaborate. But Fashion Group International named me a “rising star” this year, so I think I would have fit right in.

If you’re new to my Topshop saga, here’s what’s happened so far. I introduced my “swear rings” in 2008. 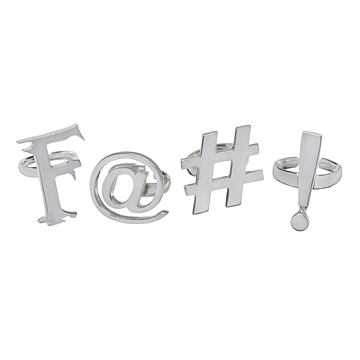 At the end of April, the lovely Sarah Graham pointed out that Topshop was selling this “Punctuation Ring Pack.” 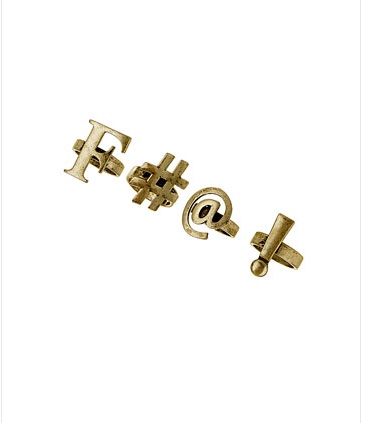 All my social–media friends got angry! Topshop apologized and said it would stop selling the rings.

Unfortunately, a month later, my spies in Russia and Australia spotted the rings in their local stores. 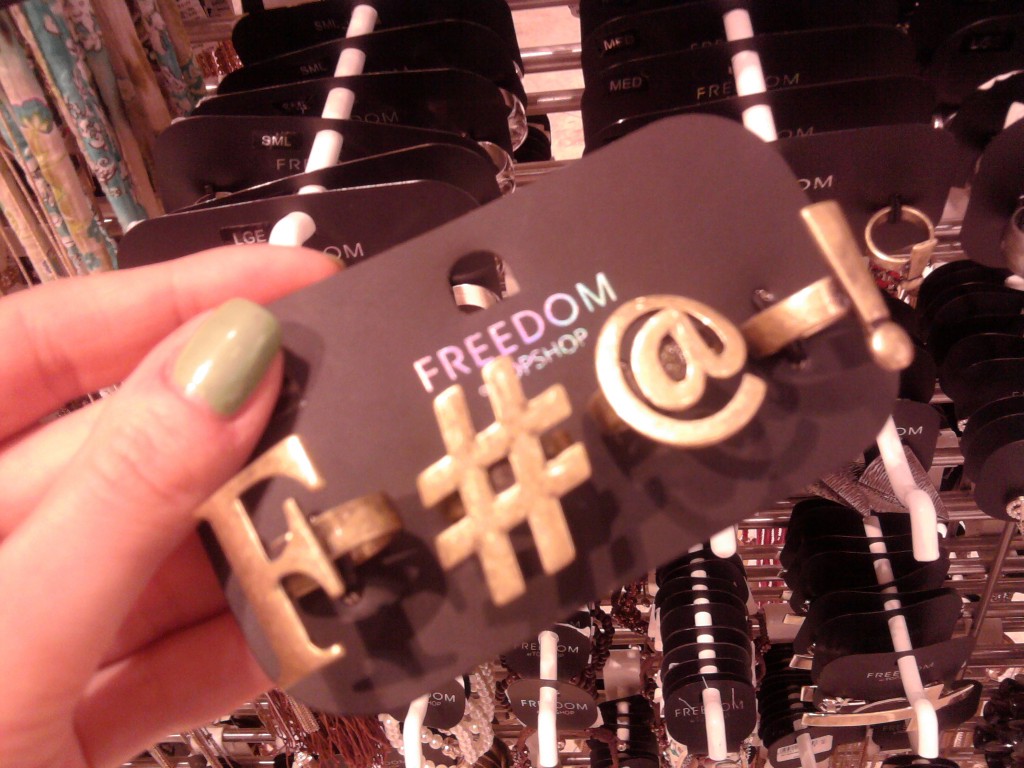 That happened last week, when I was in London on vacation. I had hoped to meet with Topshop during my visit. But the two people who deal with jewelry design were out of town, so I sent one of them an email about the Russian and Australian rings and then went to Topshop’s flagship Oxford Circus store to look around. I didn’t see my ring design, though there were tons of other four-ring sets including words like “Love” and “Kiss.” I was intrigued by that because when I introduced my multi-ring sets in 2008, it was, in part, a reaction to the popularity of single rings that spanned multiple fingers. Lots of fashion bloggers were buying those rings from fast-fashion chains. I always liked that big “brass knuckles” look but hated having all my fingers stuck together, so I started making sets of three and four rings. The style puzzled some people, who kept asking why I had to make the rings separate — why couldn’t it be one big F@#! ring? My answer: You can get the single, multi-finger ring anywhere and I didn’t feel the need to do my own version.  Recently, I noticed that I don’t get asked that question anymore. I guess now that big retailers have adopted the style, people are used to it. As I always say, “Never is the next new thing™.” Anyway, while I was in Topshop, I decided to take a picture of the “Love” set. 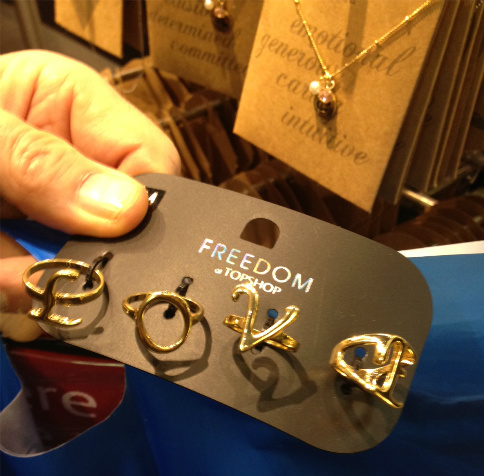 To my amusement, a security guard told me not to take pictures. I could hardly wait to tweet about that.

About 20 minutes after my tweet — coincidence? maybe! — a Topshop employee responded to my email about the Russian and Australian rings:

“I have looked into this as a matter of urgency and please be assured that the issue has now been dealt with and the style in question is being removed.”

I thanked her for her swift action and figured I was done with this. And I was, for 24 hours. Then gorgeous blogger Sara of Sunny Blonde Studio tweeted this photo, which she took in Topshop’s Loughborough, U.K., store. 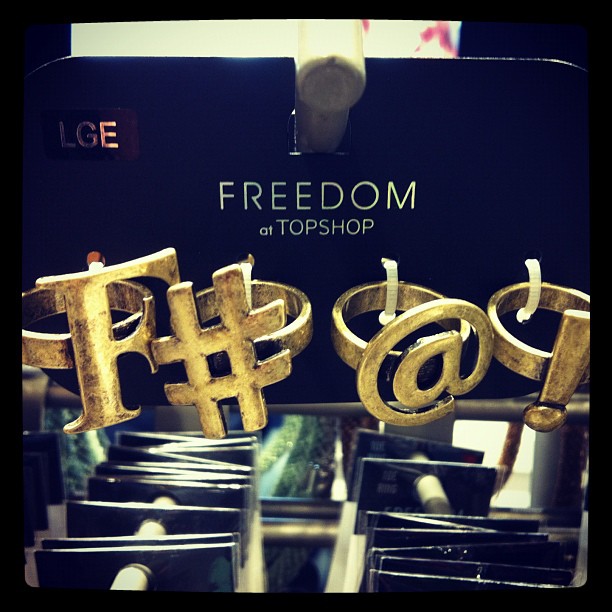 I took one look at that and called my intellectual-property lawyer. Quite a few of you have asked me whether I had a lawyer and, yes, I spoke to her back in April. But, contrary to popular belief, suing isn’t the first thing you want to do. Even asking for advice is expensive! Lawyers, unlike designers, don’t give ideas away for free, so you’re paying for every minute of every phone call, not to mention emails and cease-and-desist letters. A good attorney will encourage you to try to work things out without his or her very expensive help, and that’s what I tried to do. When I got a public apology and Topshop’s promise to remove the rings from stores, I was satisfied.  Then I saw the Russian and Australian rings, but I got a private apology and another promise to remove the design, so I was satisfied with that. But now it seems those promises don’t mean much, so I have called in assistance to try to get my name put on Topshop’s “Don’t fuck with this designer” list once and for all.

By the way, my visit to Topshop’s flagship store was the first time I ever handled the jewelry there and … bitches, please! I know that my limited-edition designs are not in everyone’s budget, but I assure you with a little effort — try eBay! Etsy! small stores! — you can find inexpensive, higher-quality options. That lightweight, disposable Topshop stuff smelled like old pennies. I suggest you save up your actual old pennies and spend them with me, because I have some new options for you. Lately, I’ve been unable to say no to customers who asked to buy single letter rings from my sterling-silver multi-ring sets, even though that messes with my ring-set inventory. For instance, Patti Gibbons bought a “G” ring from my OMG set, and Nicole Widder bought an “M.” 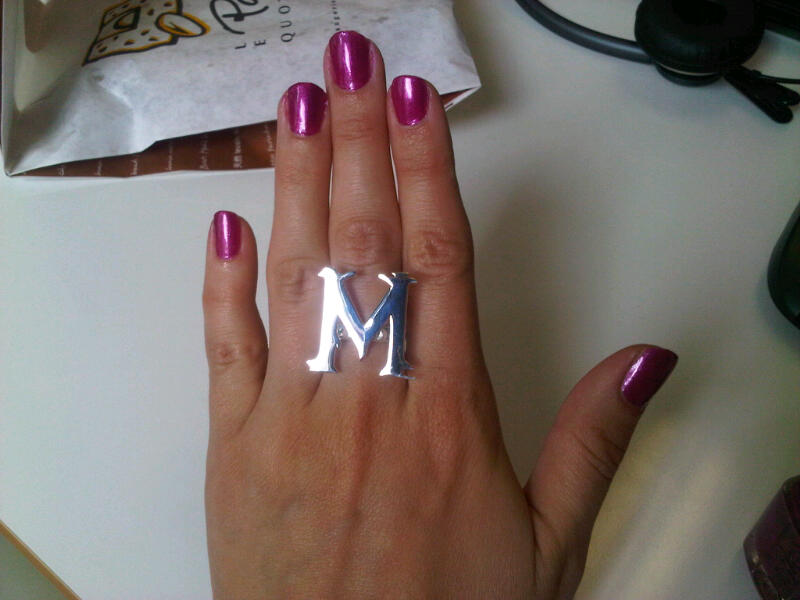 Nicole says, “I love it because my last name is Widder and my fiancé’s last name is McDonald. So I can use it for both!”

Looks great on her, right? I’m going to give in to popular demand and make all letters available individually. Rings that are part of existing sets that I manufactured in Asia and have in inventory will be $110 each. Those are O, M, G, N, Y, C, L and F. All other letters will be made upon request in New York and will cost $230 each (for more information on why U.S.-made goods cost more, read my Huffington Post story on small business). The numbers 1 through 9 will also be available. You can send your requests to me at wbjewelry at hotmail dot com. Most New York-made rings will be ready in two weeks. And if you have a spare $50,000, feel free to holla at me about that too. That’s the cost of the minimum production run for all of these rings to be made overseas so I could then sell them for $110 each. I’d be happy to have an investor!

Related reading:
The DIY Couturier: “Inspiration vs Copying: A Demonstration“
The London Intern: “Can We Copyright Designs in the 21st Century?“

UPDATED JUNE 15, 2012, TO ADD: Topshop found someone else to blame for originating the design: DCK Concessions. DCK’s website says it produces over 60 million pieces a year for more than 15 retailers. “Even if you’ve never heard of DCK Concessions,” the website says, “you are undoubtedly already familiar with our product …” Well, yes, if you’re a reader of my blog, you would indeed be familiar with one of the designs DCK produces! Ha! This still doesn’t explain why Topshop continued selling the design after twice promising to remove it, of course. I’m not letting Topshop off the hook, but I will be reaching out to DCK as well.

Meanwhile, I’m working on as many new designs as I can afford to do. I expect a new red-carpet-worthy earring design to be finished this month, along with a companion cufflink design. After that, I have two rings to complete. (I have wax models for two additional ring designs finished, but I don’t know when I’ll be able to do those. This year, I hope) I’ve also completed a number of styles for my WENDYB by Wendy Brandes diffusion line. There will be lots of fresh looks for the fall!