While packing for the trip, I thought I might need to wear something besides a black t-shirt, so I grabbed my disco-y Black Halo top. During the 36 hours I spent in Los Angeles — we made a pit stop there to visit MrB’s grandsons — I realized that the top was one I’d worn in L.A. on four previous occasions: twice in 2008 and twice in 2010. I had to put it on for a photo five-peat, even though I didn’t bring the black jeans I wore with it all the other times. 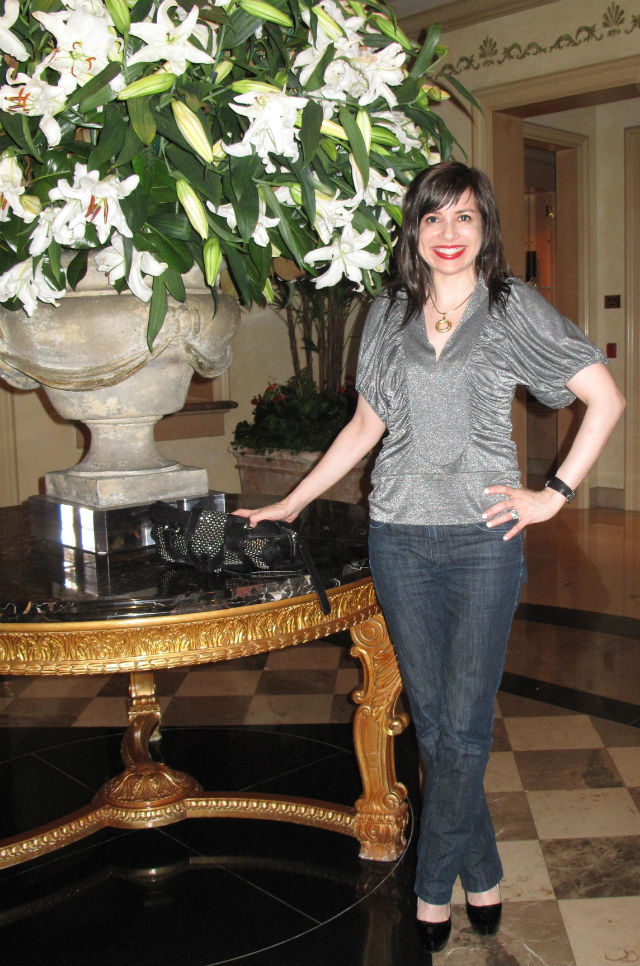 I don’t know why I look so dazed in this picture. Maybe it’s because I’d just seen Men in Black III in 3D and those glasses hurt my eyes. Yeah, that’s it! Anyway, I should really try to wear this top in New York one of these days. It makes me feel all Studio 54. Liza Minnelli was one of the celebrities who used to hang out at Studio 54. When I had very short hair, people often told me I looked like Liza. I don’t get that comment as much now, but every few years someone says it, so I wasn’t totally surprised when a man at the table next to us on an L.A. restaurant patio asked, “Do you know who Liza Minnelli is?” I had been peeking at him all night. He was a large man with a white beard who was wearing biker-esque clothes and a black leather top hat, kind of like a rough-trade Santa Claus. He was sharing his bread with his dog, who was bigger than a small pony.  I said, “Yes, of course.” He said, “Has anyone ever told you …” and I said, “Oh, people have told me that I look like Liza, though not in a long time.” He said, “No, you don’t look like Liza. You’re what Liza has been trying to look like all her life.” I thanked him and he went back to his bread basket and large dog. The peculiar compliments are often the most gratifying ones, don’t you agree?