The air quality in the apartment has improved now that Henry and Gigi have had much-needed baths. They also got haircuts and ribbons. Henry’s ribbons are a very masculine baby blue. I wonder what the plumber would say? 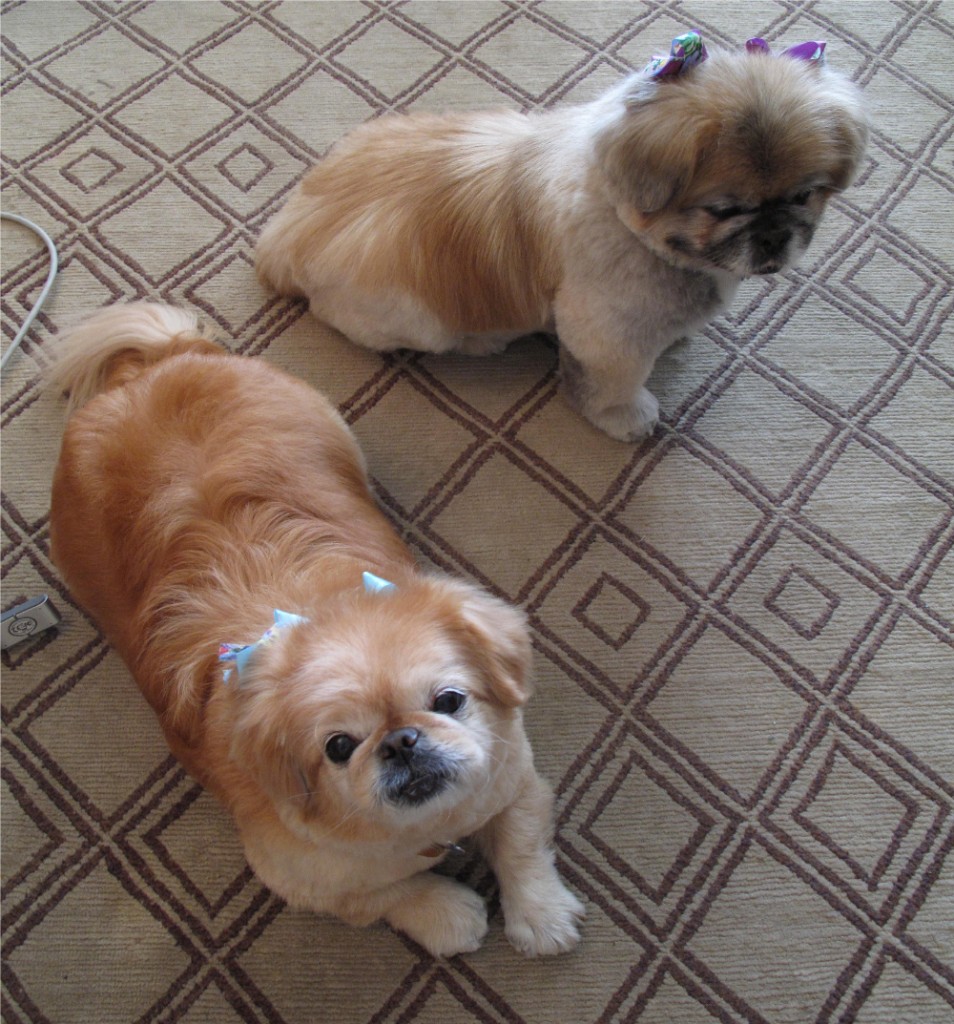 The more exciting pet news is that the dogs might be getting a feline companion. The desire for a cat came upon me gradually. Ten years ago, a friend of mine told me about smushy-faced Scottish Fold cats. I’ve thought about them ever since because — as you can see from the dogs — I love smushy-faced creatures. I thought about them more after Maru, a Scottish Fold, became an Internet star. But, though I enjoyed playing with friends’ cats, I was scared of their claws. At the end of last year, my stepson got a Ragdoll kitten during a visit with us. She was very polite with her claws, and so much fun to be around. MrB and I loved watching her play with Gigi (Henry was indifferent.).  But what pushed me over the edge was this cat, whom I posted last week. Remember this? 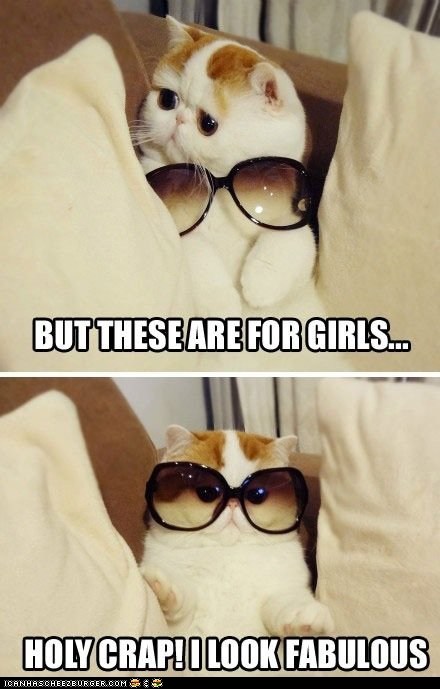 I have not been able to stop looking at this cat. This is the cutest cat in the world; possibly the cutest THING in the world, period. I must have a cute cat of my own! I’ve been considering two breeds of smushy-faced cats: Scottish Folds and Exotic Shorthairs. The latter are short-haired versions of Persian cats with grumpy expressions. I do enjoy a peevish-looking pet. 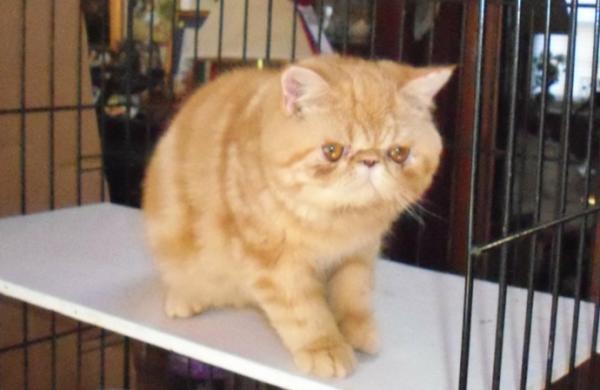 This is an Exotic Shorthair and, yes, he's judging you.

As I’ve said before, I came up with my fashion-trend-predicting catchphrase — “Never is the next new thing™” — after noticing how often the word “Never” comes back to bite me in the ass. But that doesn’t just apply to fashion. When I say “never” about anything, I’m basically assuring it will happen sooner or later. For a start, I’ve said many times that I’d never get a cat. Obviously, that’s changed.

I also said I’d never get an animal from anywhere but the pound. All of my smushy-faced dogs, starting with the late Mr. Chubbs, have been rescues. MrB and I went to Ohio to get Molly, my parents’ late Pekingese, from a rescue. And Mr. Chubbs inspired my sister to get her rescue Pekingese, Max. I’ve been a total dog-rescue snob, scolding family and friends about rescuing, and surfing Petfinder.com for fun. I started looking at rescue cats online, but didn’t see anything with the exactly the look I wanted. Then I thought,  “Forget it. I’m temporarily burnt out on pound pets anyway.”

It hit me a couple of weeks ago while I sitting in the animal hospital’s emergency room from 2 a.m. to 4 a.m., waiting for Henry’s latest crisis to be tended to. I thought about what a vet said to me (rather rudely) in 1996. I brought in Mr. Chubbs because of the seizure he had the day after I got him. “So you got yourself a purebred from the pound and you’re surprised something’s wrong with it,” the 1996 vet said.  “Just return it!” I didn’t take Chubbs back to the pound, nor did I go back to the vet. I found a new vet who has helped me deal with canine neurological problems, senility, ulcerated corneas, incontinence (both urinary and fecal, but not from the same dog), spinal-cord damage, more neurological problems, heart murmurs, allergies, skin infections, bad teeth, bladder stones, kidney stones, deformed feet and special dietary needs, among other things.

The problem is that when people breed dogs and cats for traits like smushy faces, less desirable traits are perpetuated too. (Smushy-faced animals aren’t alone in this; for instance, golden retrievers are particularly susceptible to cancer due to inbreeding.) What the original vet meant was that small purebred dogs — always coveted by apartment dwellers — generally don’t turn up in the pound unless they have serious problems, genetic or otherwise. I’d guess Chubbs was in the pound due to epilepsy. I know for a fact that Gigi was given up by two homes because of her crushed vertebrae. The injury means, to be polite, that Gigi often knows not what her sphincter does and has to be forgiven for all indoor mishaps (which are now relatively rare thanks to her special diet).  And the moment I laid eyes on Henry at the ASPCA, I knew that the foot he was favoring was going to be a major problem, though I didn’t foresee that he’d wind up getting experimental paw surgery.

My current vet introduced me to another pet owner as “the lady who takes in all the broken dogs.”  I’d like to avoid adding a broken cat to the mix, especially as Henry and Gigi are starting to show signs of a whole new set of age-related health problems. It would be refreshing to have an animal that isn’t on tail-wagging terms with the neurologist and every other specialist at the Animal Medical Center veterinary hospital.  So I’m planning to buy myself a cat! I can’t believe it, but I’m going to visit a breeder on Friday to meet a cat and its parents. Of course, any brachycephalic — that’s the technical term for “smushy-faced” — critter can have health issues, no matter where it comes from. But this time I’m willing to skip the nationwide search for the rescue of my dreams and try a breeder. (If I were looking for another Pekingese, I’d easily find plenty of rescue candidates. Yep, I’d do that all over again.)

I wish I didn’t have such a passion for brachycephalic animals. BUT OH EM GEE LOOK AGAIN AT THE CAT IN THE SUNGLASSES!  IT IS THE CUTEST THING EVER. Here are some more photos.

I just can’t quit these smushy-faced breeds.  That reminds me: It’s time to check SquishFaceKitties for an update!

You might also like
Happy Very Belated Birthday to Me
Thanks for Thinking of Me, Roxanne
I Loves Funny Capshuns
Previous Post: « “Fashions Fade, Style Is Eternal” — Yves Saint Laurent
Next Post: Dick Clark, Madonna and My 1980s Jewelry »