Last Sunday’s New York Times had an article about singer Kelly Clarkson called “Kelly Clarkson, a Pop Star Proud in Her Own Skin.” It looked at how fans identify with Clarkson not just because of her powerful voice and stand-up-for-yourself lyrics but also because of her habit of “dismissing withering criticism of her weight.” 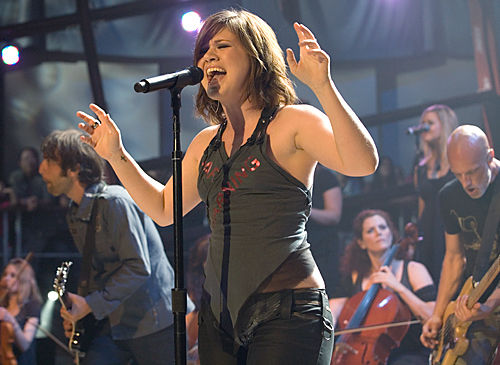 Courtney E. Martin, the author of Perfect Girls, Starving Daughters: The Frightening New Normalcy of Hating Your Body, told the Times, “For any woman to not only own her body size at an average woman’s weight is amazing, let alone to own weight gain without shaming and stigmatizing it publicly.” And Danielle Travali, who described herself to the Times as an eating-disorder survivor, told the newspaper that Clarkson’s lyrics moved her to tears. “You get a sense that she’s one of us,” she said.

Damn! I don’t blame people for wanting someone to identify with, but I was a little freaked out to see them so emotionally invested in Clarkson’s weight, even in a positive way. What if Kelly develops a passion for triathlons and becomes a total hard body? Will her fans think she’s abandoning them, a la Crystal Renn, the plus-size model who caused a controversy when she lost weight? Does Clarkson have to consider her admirers every time she eats so it’s not too much, but not too little, either?

Courtney E. Martin acknowledged, “It’s a difficult line to walk because Kelly’s private. She doesn’t want to be known as the fat activist pop star. That’s not her mantle.” Still, the Times noted, when Australian talk show hosts last month asked Clarkson if she’d lost weight, “She smiled and immediately replied to one, ‘No, I have not! Nothing! Everywhere I go, people say that, but nope!'” It’s like she has to insist, “I’m still what you want me to be.”

The Times quoted Clarkson’s song “You Can’t Win”: “If you’re thin/Poor little walking disease/If you’re not/They’re all screaming obese…” Seriously, Kelly! You CAN’T win. But count me as one listener who will like you the same whether you’re thicker or thinner as long as you don’t have dirty people over for endless house parties.

And thank goodness for jobs that don’t include “role model” in the list of responsibilities. I’d be fired for failure to perform before I even got a pretty postcard of a beach thumbtacked to the wall of my cubicle!

UPDATED TO ADD: Danielle Travali, who was interviewed by the Times, says she too will be a fan of Kelly through thick or thin, though she didn’t clarify her position on hipster house parties. What she values is Clarkson’s willingness to address painful experiences in her lyrics. Check out her comments below!

You might also like
"Be a Lady, They Said"
Get Smart About Manufacturing, Take Two
ICYMI: My MTV VMAs Posts From 2007 to 2015
Previous Post: « “Leaf Me Alone” Minx Manicure by Tracylee Percival
Next Post: What Wendy Wore: Golden Girls Gang Does Vegas »